Bill Bain was a popular man after Wattlebank Star powered to an impressive win at the Roxburgh breeder’s home track on Tuesday.

Wattlebank Star (Bettor’s Delight-Change Time-Christian Cullen) put a disappointing last start effort at Winton well and truly behind her when she kept on charging in the lead for trainer-driver Kirstin Barclay.

The four-year-old’s last start 11th was found to be the result of tie-up, common in Southland during what has been an incredible growing season.

The issue meant Bain didn’t exactly know what to expect from Wattlebank Star as she returned to Roxburgh after winning at the same meeting last year.

But many of the locals weren’t quite up to date with that scenario, they just expected the past-president’s horse to turn up and win.

Thankfully for the club stalwarts, she did.

“She let me down badly at Winton, so I wasn’t sure what to expect,” Bain said.

“Being a local horse everyone seemed to be backing her, I think they thought she was just going to turn up and win.”

“But I said it’s not quite as simple as that.”

“It was good that she got the job done – everyone was happy.”

They brought the Roxburgh Cup sponsors Karen and the late Trevor Peters – of Peters Genetics – into the horse’s ownership.

The three-year-old is shaping up nicely for Kirstin Barclay.

The same group sold Onedin Miki (Always B Miki-Onedin Royal-Mach Three) at the National Yearling Sales with the pacer being purchased by stallion giants Alabar and Nevele R Stud.

Onedin Miki was an impressive first up winner for the two studs and their big group of co-owners at Motukarara.

The Mark Purdon and Hayden Cullen trained three-year-old looks to have a bright future judging by his winning performance.

Onedin Royal left a full brother to Onedin Miki recently which ended something of a frustrating run for the mare. 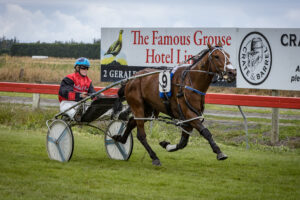 “We have had a lot of trouble, she hasn’t gotten in foal and she has lost them,” Bain said.

“We have only had two live foals, Onedin Miki and this one this year who is a full brother.”

“It is getting a bit late now but we are going to try to get her back in foal.”

“She’s going to Lather Up, he and Always B Miki are both world-record holders so hopefully they both cross with her.”

The Bains have been strong supporters of Always B Miki.

Their Group One winning mare Pembrook’s Delight foaled a colt by the sire this season and she has been served by Captain Crunch.

Change Time left an Always B Miki filly and she has gone back to Bettor’s Delight in the hope of producing a full sibling to Wattlebank Star.

The Bains are also breeding from Bunter’s Gold this season who was recently retired.