Origins of the Standardbred Horse 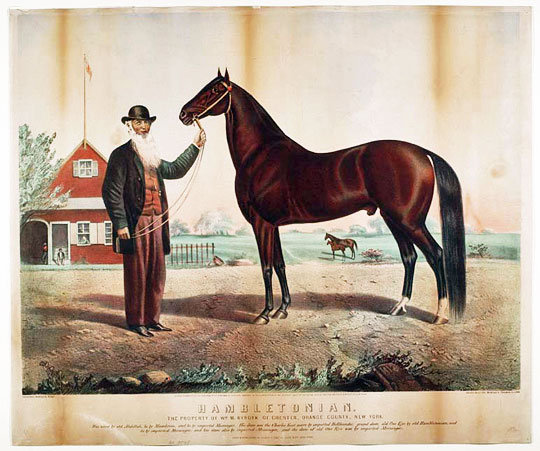 Trotting races become popular as a casual sport in the USA’s very early days, and it wasn’t long before a focus came on breeding to improve speed and endurance. The Standardbred as a breed traces back to the English thoroughbred Messenger, imported to the USA in 1788. Messenger won ten galloping races in England and was a top thoroughbred sire.

Messenger also had trotting in his pedigree. His great-great grandsire Shales was the foundation sire of the Norfolk Trotter, a breed used for travel under saddle since the time of Henry VIII, and highly valued in a time of conveyance by horse & carriage. When his thoroughbred siring career ended, Messenger spent a time producing horses intended for trotting.

Messenger’s great-grandson Hambletonian 10, foaled in 1849, is considered the breed’s foundation sire from which all Standardbreds descend. Hambletonian 10’s damsire was an imported Norfolk Trotter, with American Morgan and other breeds in his pedigree. All that combined with the thoroughbred influence gave him an unusual build: low at the withers but high at the croup, with long hind legs that provided powerful thrust with each stride.

Hambletonian 10 was a speedy young racehorse that so impressed the experts of the day that he began stallion duties at two ears old.  He went on to sire over 1,300 offspring, passing his characteristics on and setting the scene for the breed to be defined as it is today, albeit with considerable refinement down the years. 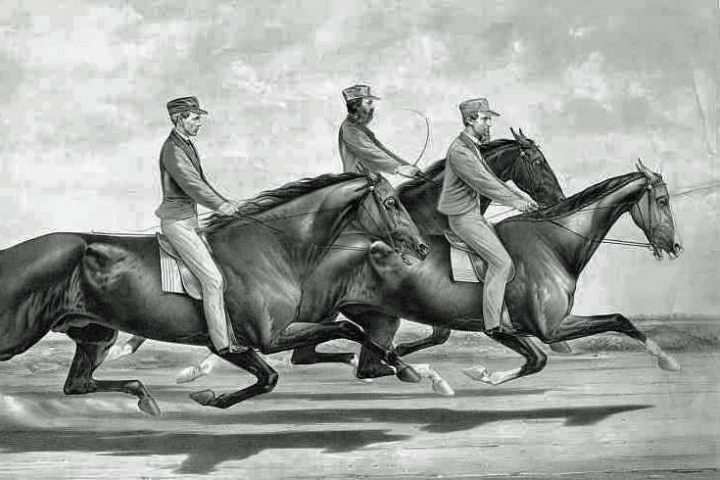 In 1879 the USA’s National Association of Trotting Horse Breeders issued the first Standardbred registry. The breed’s name was derived from the ‘standard’ required of breeding stock, that they were able to pace or trot a mile in under 2 minutes 30 seconds.

In 1897 Star Pointer, a horse that would influence New Zealand breeding through his son Logan Pointer, was the first pacer to break two minutes for a mile. The mare Lou Dillon was the first trotter to have that distinction in 1903.

The Standardbred in New Zealand

Just like in the USA, trotting started in New Zealand with the early settlers racing their work horses, trotting under saddle for an often not-so-small wager.

In the 1860s official trotting racing began with contests on the programme of the Milton and Cromwell Jockey Club. Otago and Southland led the way as entertainment for the region’s goldfield workers, and other districts took time to follow. Match racing over distance was a popular early form of racing, and a 12-mile contest from Dunstan to Cromwell is recorded.  In Canterbury, Rakaia was the trotting hub at that time.

Through the 1860s and 70s, trotting races appeared occasionally at galloping meetings. The first recorded official trotting race in Auckland was in 1866, held on the Auckland Racing Club’s card. The first full trotting meeting took place at Wanganui in January 1881. The strength of the sport in that region may be attributed to the legacy of the New Zealand wars and the local horse population that resulted. 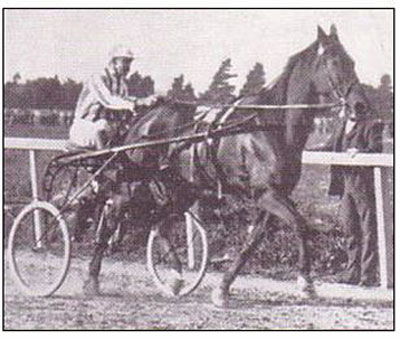 In 1882 the first Canterbury trotting meeting took place on the Lower Heathcote Racing Club course at Ferrymead. New Brighton was the early scene of match racing in Christchurch, and Lancaster Park later became a venue.

In 1886 the first race exclusively for pacers was run at Fortrose on the southern coast.  At this time racing was still being conducted as saddle trots. The first race with horse in harness and driver in cart was a match race at Forbury Park in 1885.

Sulkies were first used in the 1890s, and true ‘harness racing’ began.  These contraptions were a far cry from the sleek racing machines of today.  By the turn of the 20th century harness racing was well-established in New Zealand, and motivation to breed faster racehorses was growing.

The earliest Standardbred stock importers included Robert Wilkin. In the 1880s Wilkins brought from both Australia and USA mares considered some of the best available at the time. John Kerr imported Irvington, the only son of Hambletonian 10 to be exported from USA.  Irvington sired Young Irvington, NZ’s first natural pacer and top racehorse who stood at stud in Australia. Irvington was the grandsire of trotter Monte Carlo, who beat the pacers to win the first NZ Cup in 1904. Blackwood Abdullah, Wildwood and Rothschild (from Australia) were others among several prominent early stallion imports.

USA exports to Australia also materially helped improve the breed, and there was considerable trans-Tasman trade in harness racing horses even in those early days.  The first trotter to break 2.30 down under was Vancleve (later to have significant influence on the NZ bred) in Victoria in 1893. In 1900 the early Australian champ Fritz was in NZ and setting a mile rate of 2.13.

By the turn of the century there was an established breeding industry in New Zealand. The first NZ Standardbred Stud Book published in 1905 records 225 mares bred in New Zealand.  Colonial-bred stallions of that time that were to leave their mark were led by Lincoln Yet (b. 1883) and Kentucky (1884). 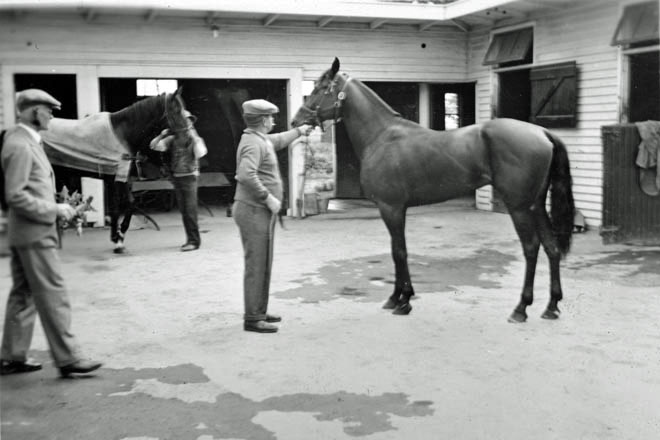 John McKenzie (left) looks on as grooms attend to horses at Roydon Lodge.

Etienne Le Lievre, a son of Akaroa’s early French settlers, is perhaps the best-known pioneer of NZ Standardbred breeding. Etienne imported his first horse from the USA in 1904, the soon-to-be champion sire Harald Dillon. On his next trip he purchased Nelson Bingen along with three mares. The first NZ Standardbred breeding dynasty was well and truly established.

Harness racing was extremely popular around this time. The breeding industry’s momentum continued with the efforts of John McKenzie (later Sir John), after he purchased Great Bingen. Sired by Nelson Bingen and out of Berthabell, one if those mares Etienne had brought with him from the States. Great Bingen was a record-breaker on the track for his new owner. He became foundation stallion at the famed Roydon Lodge, est. 1928.

Conformation of the Standardbred

The Standardbred is widely known as a placid and willing horse as well as being very athletic. Compared with the Thoroughbred, the Standardbred has generally stronger but shorter legs, a longer body and more sloping shoulder.

There is little variation between those bred as trotters and pacers. All have durable hooves, a slightly arched, muscular neck and medium-long barrel. While not permitted in racing, the Standardbred will canter and gallop as any other breed, and some will pace free-legged (lateral gait, without hopples) in addition to the usual four gaits.

To be recognised as a Standardbred, a horse must be recorded in the Stud Book. The Book is maintained to include all sires, mares and foalings and a horse is not eligible for registration unless it is the progeny of a sire and dam also registered in the Stud Book, has been microchipped, and has had a DNA sample recorded.

From the 2020/21 season, all standardbred foals born in New Zealand are microchipped for identification. The microchip is placed along the top of the neck, beside the nuchal ligament, half way between the ears and the withers. A microchip reader is required to formally identify horses of the breed born from 2021/22 (in the 2020/21 season, foals were freeze branded and micro-chipped).

Before 2020/21 season, all New Zealand-bred Standardbreds were freeze branded only. The brand appears in an upper near-side neck position on two lines. The top line represents the season of birth followed by a ‘Z’ (for New Zealand), and the bottom line a six-digit number. All numbers are represented by symbols as follows: