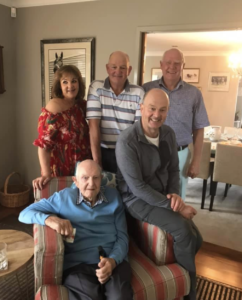 The patriarch of Australasian harness racing’s most successful family, is still producing winners, less than four months after he passed away.

The harness racing ‘Hall-of-Famer’, who was made a Member Of The British Empire (MBE) in 1988, picked out Te Amo’s grand-dam – the 1987 Butler B G -Parisian Dream (Sly Yankee) mare, Bee Gee’s Dream, at the 1989 Yearling Sales in Auckland.

“If Bee Gee’s wasn’t in the first 20 lots Dad would probably never have bought her.

“We paid about $25,000 for Bee Gee’s Dream. Dad picked her out for us – and luckily, she was about Lot four or five in the catalogue, because Dad seldom stayed after the first 20 lots. If he did like something he usually left us at the Sales to do the bidding,” said Ardmore-based Herlihy.

“We wanted a horse for a few girls to have fun with and Dad liked her a lot. That original syndicate was called the ‘Staying Alive Syndicate’. Dad and Barry trained her and Mark did the driving. She won her first two races, but only had seven starts,” she added

Herlihy said the Syndicate bred the first 11 foals from Bee Gee’s Dream and then as interest waned over the years, she was left as the sole breeder of foals numbered 11 and 12, one of them being Alesandra Ambrosio.

The Tony Herlihy trained and Tony Cameron driven Te Amo won by one-and-three-quarter lengths on Friday, with a 1:59.9 mile rate.

The son of Bettor’s Delight has now won one of his 14 starts and placed in three others for $15,468.

Herlihy, who bred and owns the brown 4-year-old gelding, said she was surprised that he was the $9 sixth favourite.

“We have always liked him. He’s a lovely horse and even though he paid that price, we half expected him to go close.

“The boys have taken their time with him and he’s now starting to realise what racing is all about. Tony (Cameron) drove him well,” Herlihy said.

Te Amo is the seventh foal with Alesandra Ambrosio now aged 14 and is currently in foal to Always B Miki.

“Tony tried her as a racehorse, but didn’t think she would make it, so we put her to American Ideal in late 2010 and the following September, American Boy was born. He won his only start in New Zealand at Alexandra Park on February 20, 2015 before he was sold to Australia and then the USA (1:50.4), where he won 43 times for $709,971.

Like her mum, Alesandra Ambrosio, has done a wonderful job in the broodmare’s paddock.

The second foal Posties Desire (Real Desire) never made it as a racehorse but the Herlihys are breeding from her. She has left three foals by Bettor Dream (Bettor’s Delight – Dream Offer) and she is currently in foal to that stallion again.

“Shadow Pass (Shadow Play) was her third foal and we also sold him to Australia after he won two races. The same applied to her next foal – The Big Cheese (Betterthancheddar).”

Shadow Pass and The Big Cheese have since won 15 and six races respectively in Australia.

Herlihy said L L Cool J (A Rocknroll Dance ) came next  and he won six starts in New Zealand before he was sold to Australia. He is now one of Queensland’s top pacers with 17 wins and $201,031 to his name.

“You guessed it, my husband insisted on selling him too. I just loved L L Cool J. I named him after the American hip-hop singer who also hosted a show called Lip Sync Battle. It’s good to see he is doing well in Queensland,” Herlihy said.

Doubtless Bay (by Bettor’s Delight) was the next foal after LL Cool J.

“He placed twice from five starts here before Tony whisked him away to Australia. He has since won seven races over there. He was the foal before Te Amo.

“You have to be careful with Tony he sells everything in sight. I tell you though he’s not getting his hands on the next foal.

“She is by He’s Watching and her name is The Notorious R B G. She’s two now and has won one of her four starts. Tony can’t get her because we love her and that’s why she is owned by me and my daughters Rachel and Ange,” Herlihy joked.

“We love them all, and we’ve got Dad to thank for it. He had the eye and the foresight to pick out Bee Gee’s Dream for us. She started it all and her family have done very well,” Herlihy said.

They all have Roy Clevedon Purdon and Bee Gee’s Dream to thank.