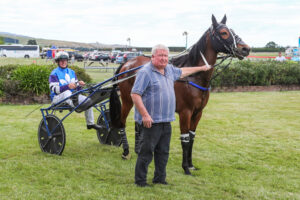 The value in retaining racemares rather than selling them to Australia is paying off for breeder-owners Mike and Sue Maguire.

“She did a huge job over there, she ended up winning 15 races all up,” Mike Maguire said. “She ran second to Keystone Del in the (Group One) Bill Collins Mile one night at Melton.”

“We sent Rosemma (Monarchy – Sun Mist – Sundon) over to Brent Lilly too and she ran a placing in a (Group One) Trotting Derby. Between them, they did a huge job.”

Rosemma is a half-sister to Pretty Sunday, both granddaughters of the great trotting mare Merinai.  Rosemma won two in New Zealand before adding another eight wins to her resume in Australia.

Both sisters returned to New Zealand to start their breeding careers for their owners. Their journey into the Maguires’ broodmare band started after the owner-breeders bought big brother Sonofanearl (Earl-Sun Mist-Sundon) at the National Yearling Sales. Just like his sisters, he did a great job in Australia in Brent Lilly’s stable, rounding out his career with 22 wins.

“I bought Sonofanearl, then I bought the full sister Pretty Sunday,” Mike Maguire said. “Nobody wanted her, but I put a bid in after the sales for a few thousand dollars.”

“Then she performed and I went back and bought her sister (Rosemma) for a few bucks more. Between the three of them they have won close to 50 races. It is a good breed and it will only keep going I would imagine.”

The Maguires have two half-siblings to Magnifique Dimanche from Pretty Sunday and both have been put through their early paces.

“I have got a Majestic Son out of Pretty Sunday, Robert Anderson has done a bit with him and he has shown a bit but he needed a bit of time. He is only a two-year-old, so I have turned him out.”

“The other one out of her is a Father Patrick yearling, he has a bit of ability too.”

After missing to What The Hill last year the Maguires have sent Pretty Sunday to Creatine this year and they are awaiting a final positive scan result.

Rosemma is also in the same position, served by Creatine and hopefully in foal. She is the dam of Rosie’s Son who has shown promise for Bob Butt. The mare has also left a two-year-old and a yearling filly both by Majestic Son.