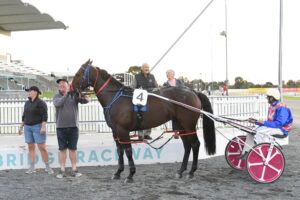 Rotorua school teacher, Tony Armstrong, can boast at having more than 200 breeding winners on his harness racing CV.

And that scoreboard kept ticking over at Cambridge Raceway last Thursday night when 5-year-old pacer Hezashadowplaya (Shadow Play – Sheza Gem) justified his $2 favouritism in race two, with a length victory.

Armstrong bred and co-owns the son of Shadow Play with Dane Alexander, R D Alexander, and D I Donaldson.

Jason and Megan Teaz train Hezashadowplaya at Ohaupo. It was their first win of the season after a virus had spread through their stable.

“I didn’t get time to get to the races but it was a nice win, and a very good training effort considering the horse had been ill recently. He got the virus quite badly after a couple of nice runs in early February. Sailesh (Abernethy) drove him perfectly.

“I’m quite proud of my breeding record considering I do other work as well. All 200-plus are from Alabar Stud stallions. My mares are all looked after by Alabar and when the foals are weaned they are sent home to me.

“This latest winner is the sixth of seven foals out of a Christian Cullen mare named Sheza Gem. I stopped breeding from her 2017 and gave her away as a hack.

“She didn’t make it to the races. She was a little foal, like her mother. In fact, none of her (Sheza Gem’s) three fillies won a race, but the colts have done a good job – with all four winning at least once,” Armstrong said.

“This fella (Hezashadowplaya) has won three races now, but he has got a way to go to be as  good as his older half-brother, Mr Franklin (2010 Grinfromeartoear colt). He won five here and has since won a lot of money in the USA. He also boasts a 1:50.6 mile.

“The best I’ve bred would be Arms of an Angel, who was a sensation in Australia and ran third in the 2016 Miracle Mile.

“She’s Pukka (Betterthancheddar – Pukpuk Princess) is another very good mare from my breed. She  won two of her first starts here and since leaving for the United States in November 2018 she’s developed into one of the fastest racing mares in that country,” he added.

She then won another race for him when trained by Sean McCaffrey, before he retired her to the broodmares paddock in 2003.

“Amazing Luck left me some nice foals and I also gave her away to a riding family in Northland. She was a beautiful black mare,” Armstrong said.

Sheza Gem was Amazing Luck’s second foal, but the best of them was the 2012 Grinfromeartoear colt, Hezaluckygrinner, who won five races and just under $50,000.

The Bay Of Plenty teacher/farmer/breeder said he had cut his mares right back and was now breeding from the same family as his Miracle Mile and Chariots of Fire place-getter, and winner of the Hando Gratton Stakes (all 2016), – Arms Of An Angel (12 wins and $221,866).

Armstrong said that breed goes back to the 1986 Wayne Francis Nero’s B mare, Lalique.

Armstrong originally bred from her third foal, the 1994 four-win Caprock mare, Likely Franco. She is Arms of An Angel’s great-great dam.

“Likely Franco won four races and has been a prolific foundation mare for me. My brother and I downsized our grazing block about three years ago, and we don’t run as many cattle and horses as we used to.

“All my foals are based at Alabar Stud and I only use their stallions. I love harness racing – always have done. I’ve always enjoyed racing and breeding them. I didn’t realise I had won so many races until I did a tally up recently,” Armstrong said.

He said some promising Armstrong-bred horses to watch for in the future include Hellofasportsstar ((4yo Sportswriter-Millwood Bette gelding) and Imashadow Princess ((4yo Shadow Play-Pukpuk Princess mare).

“There are a few others in the paddock to work with too,” Armstrong said.

“I think the best horses I’ve owned and bred were Arms of an Angel (12 wins). Trevs No Angel ( 12 wins) and Pukpuk Power, who won five races here and then did well in the United States,” he concluded.