Skip to content
2019 Breeder of the Year: Charles Roberts

2019 Breeder of the Year: Charles Roberts 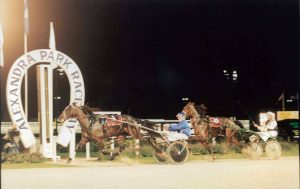 Scuse Me winning the Taylor Mile in 1998

The awards for Owner and Breeder of the Year have been going for 16 years now and no individual has been more influential than Charlie Roberts.

The proprietor of Woodlands Stud was recently announced the Breeder of the Year for the fourth time in the last seven years, to go with a three-peat in 2013-15, while in between the award has also gone to Woodlands.

Roberts was also an Owner of the Year in 2013 following a season where Adore Me won 11 of 12 races as a three-year-old and close relation Christen Me won 12 of 15 races as a four-year-old, the pair winning close to a million dollars in that season alone.

Throw in a few Broodmare Awards for Scuse Me and her family and several Stallion Awards for Bettor’s Delight and it can be seen that Roberts has had a massive influence on the industry.

Obviously, Bettor’s Delight has played a significant part in all of this, but Roberts’ success can be attributed even more so to ‘that family’ – the one that sprung from his decision to return Scuse Me to New Zealand at great trouble and expense.

Much has already been written about the family and its standout individuals over the years, so perhaps it might be timely to focus on how and where all this evolved from.

As is so often the case in these sort of success stories, it emanated from a most unlikely and surprising place.

Mark Purdon has also been a key figure in the story over the years so it is fitting that he played a key role during a brief and limited foray into the realms of breeding back in the 1980s.

Purdon actually appears as the breeder of Scuse Me although he had loaned the Smooth Fella mare Super Smooth to Jim Dalgety that season.

Scuse Me should have been a failure being a filly by B.G’s Bunny and she was a buy back at the Premier Sale for $5500, but she became a Great Northern Oaks winner and the fastest mare over a mile in New Zealand for quite some time with her 1.53.5 upset in the 1998 Taylor Mile.

This story actually begins with Purdon as a junior driver and his very first foray into ownership.

Time Lag was a Farm Timer filly racing for Brian Notman some 33 years ago when a then 22-year-old Purdon acquired her with a view to getting a sale and a profit later.

Purdon had driven Time Lag in two of her three wins for Notman, and this venture went well for a start when the 4-year-old had another three wins and two seconds from six races for Purdon towards the end of the 1986/87 season.

But Purdon then found himself with the liability of a broodmare instead of a healthy margin on a racehorse when Time Lag went amiss.

Purdon only got five foals from Time Lag before she died and her three colts were just moderate performers, so there was no real sign of what was coming.

She had been the last of nine foals from the Fallacy mare Gold Heritage, whose only prior winners had been the Out To Win filly Remit in Perth along with Tyrit, who managed to win races in Macau.

Remit was a consistent performer rather than being a star, winning 18 races and $93,000 from 109 starts in the 70s, but she would establish a very good family herself.

And the first foal from Time Lag’s unraced daughter in Super Smooth would be Scuse Me.

Dalgety had had a bit to do with the family over the years and had been handed Super Smooth by Purdon to do a bit of work with.

While she developed hock issues, Dalgety liked Super Smooth enough to borrow and breed her to B.G’s Bunny when transported semen was just getting going.

In 1992, B.G’s Bunny was heading for Dalgety’s Lantana Lodge at West Melton, but he arrived with a reputation as a ‘maneater’ and wound up staying at Woodlands when that stud was in its infancy.

Roberts found B.G’s Bunny to be no problem at all however once he was “let out of his cage” and allowed a bit of freedom, but before heading home again the 19-year-old son of Albatross was found dead in his paddock.

He had covered 245 mares for 152 foals before his demise, but in one of breeding’s greatest mysteries, Scuse Me would be one of only three or four foals by B G’s Bunny here that were ‘worth a feed’.

That one crop in New Zealand produced only 32 winners (21%) and only half a dozen of them managed to win more than one race.

This was an extraordinary development considering B G’s Bunny’s pedigree and performance and the fact that he had seemingly been an adequate sire in America.

Especially so when the quality of mares he was accorded in New Zealand was considered and needless to say, there weren’t too many breeders lamenting his loss in subsequent years.

B G’s Bunny could be considered among ‘the greatest disasters at stud ever’ and he would be joined in that respect by his best performed son in McKinzie Almahurst, along with another son of Albatross in Jaguar Spur.

B G’s Bunny has been an influence in maternal lines however and Scuse Me would prove to be an exception to the rule here.

After Dalgety had passed her in at the sales when there was little interest in what appeared to be a modestly-bred filly, Purdon offered to go halves in racing her and Scuse Me would defy her sire and pedigree by making her debut as a late 2-year-old and chasing Megaera and Kate’s First home in the Caduceus Club Classic.

While she played third fiddle to those two top fillies for much of their 3-year-old seasons as well, by the time Scuse Me had won her second G1 race as a 4-year-old, a big offer had come from American owner Joe Alflen.

Scuse Me would have a “very rough’ trip to America however and never settled well enough to even qualify.

Roberts had become aware of Scuse Me’s American plight in 1998 and put her in foal to Life Sign before bringing her home via a long and winding road.

“We called that colt foal Megabucks because that’s what the whole episode had cost us,” recalled Roberts in later years.

Megabucks looked good winning five of 11 races for Barry Purdon before Roberts raced him in America with Brett Pelling.

Then came the Dream Away filly Splendid Dreams (3, 1.59.3) and she looked smart in winning at Addington by three lengths as a 3-year-old and at Alexandra Park a year later, where she downed Helena Kilena and Waitfornoone, but she was retired after just six races with a reoccurring tendon injury.

Fillies by In The Pocket (La Filou) and Il Vicolo (Coca Vicola) and a colt by In The Pocket (Pardin Me) were the next foals from Scuse Me and they were winners without amounting to much, but then came the Dream Away filly Imagine Me (3, 1.56.9, $247,000), the Christian Cullen colt Torledo (7 NZ wins) and his sister Abide With Me (1.57.7, 4 NZ wins) and American Ideal colt Idolise Me (3 NZ wins).

Adore Me was Scuse Me’s first foal by Bettor’s Delight and her brother Have Faith In Me arrived two years later.

Clearly the speed factor inherent in Scuse Me through B G’s Bunny and a Smooth Fella dam proved the perfect foil for the toughness which Bettor’s Delight brought to the table, in much the same way the latter has crossed so well with the Direct Scooter sire line.

Splendid Dreams produced the Christian Cullen brothers Christen Me and Hands Christian in consecutive seasons along with Dream About Me among others, and now Adore Me’s first foal is Sweet On Me, a first crop daughter of Woodlands’ new sire Sweet Lou who was last season’s 2YO Filly Pacer of the Year.

The first foal from Splendid Dreams was Splendid Deal and her first three foals were Maxim ($510,000) and the smart fillies Splendour and Hartofdixie.

Clearly this is a story that is still evolving and far from finished yet  and it is disconcerting to think that none of it would have happened, had Roberts not had the inkling to return Scuse Me to New Zealand as a broodmare.