2019 BROODMARES OF THE YEAR 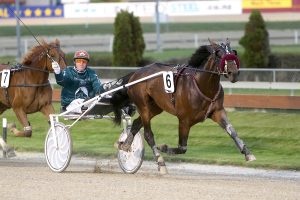 It has been a while in the making and it has been far from plain sailing, but Graeme Walsh’s faith was rewarded when Reality Check was named Pacing Broodmare of the Year recently.

Last season’s standout three-year-old Ultimate Sniper was Reality Check’s third winner from seven foals, but those winners have been Group One performers with Major Reality (WA Oaks) also taking a record of 1.50.9 at Menangle last season.

Last season was a disappointing one for Ultimate Machete before he was retired to stud, but he was a four-time G1 winner and took out the New Zealand Free-For-All two years ago in a mile rate of 1.51.9, an all-comers national record which still stands.

Ultimate Machete also won the NZ Sires Stakes Final at Addington a year earlier in record time, a race won by his brother Sniper last season in a new three-year-old record of 1.52.9.

When spoken to in early October, Westport’s Walsh was anxiously awaiting the arrival of a third Bettor’s Delight foal from Reality Check.

“As commercial breeders you’re always hoping for colts, but for once we wouldn’t mind a filly,” said Walsh.

“She’s probably due a colt, but we’ll be happy just as long as the foal is healthy.”

It has been 10 years since Walsh acquired Reality Check as a broodmare from Rod Croon and he’s had his share of bad luck along the way.

A top filly performer herself and a winner of the Sales race for two-year-olds in Auckland, Reality Check was one of 11 winners from the smart and speedy Lordship racemare Maureens Dream, herself a half-sister to the brilliant juvenile Tuapeka Knight.

“I think she only became available because Rod’s marriage had broken up and she was the sort of mare we were looking for at the time, while being in foal to the right sort of sire.

“We didn’t know much about breeding when we started, but we soon learned that breeding cheap mares to top stallions wasn’t going to cut it (at the yearling sales).

“For the yearling sales you need very good individuals by the right sires, but just as important is the pedigree page.

“So one day we sat down with (preparer) David Shadbolt and Peter Lagan and worked out what we needed to do and that mostly revolved around the quality of the mares.

“A bit earlier we’d also bought T K Swift and while she didn’t produce the sort of performers we were hoping for, we did get some excellent results with her foals at the yearling sales.”

The Christian Cullen colt was a good individual and Croon sold him at Karaka for $55,000, only for him to be lost while being broken in, but Walsh got a filly who was not a great type and she sold for $22,000 at the Premier.

Ultimate Reality only qualified and her first foal has been given away as a hack.

Major Reality, a filly by Art Major, was the first foal that Walsh bred from Reality Check and she was sold for $31,000.

“She was trained by Justin Prentice in Perth for a syndicate and came on the market last year because they didn’t want a broodmare.

“Harvey Kaplan won a bidding war for her and now has her in foal to Bettor’s Delight, after getting that 1.50 time on her.”

Next came a colt by Rocknroll Hanover and he was a “huge horse” that brought only $12,000 at the Premier.

“Bob Butt had him for Tony McGrath and I’m told he had a motor, but he had to be put down with a twisted bowel as a late two-year-old.”

Machete sold for $84,000 and Sniper for $85,000 with the Kennards, Creightons and Gavin Douglas racing both.

In between, Walsh bred a filly by American Ideal in Ideal Reality, and as a big horse, she went to stud after qualifying as a late two-year-old.

“We had her back at the trials later that year, but decided she was worth more as a broodmare.

“She had a trial in December (9th) and was in foal a week later, but it was late in the piece and now her foals are coming late until she has a season off.”

The first foal is a colt by Bettor’s Delight in Ultimate Missile and he will be Walsh’s only yearling at the sales next year, while she is back in foal to Bettor’s.

“She’s a really big mare and we don’t actually have a lot of options outside of Bettor’s when it comes to smallish sires.

“We’ll probably stick to the tried and true, but we’re thinking about Lazarus for one of them as I’d expect to see some hype around his first crop at the sales.”

An Art Major colt in Ultimate Assassin was sold for $57,000 to Barry Purdon at the Premier last year, but he had to be put down with a form of laminitis.

Reality Check then missed to Bettor’s Delight before producing a filly last season by Art Major, and she was soon sold to Spreydon Lodge as a weanling.

“We’re breeding to sell and we simply made a business decision on that one, knowing we had a filly in the bank.

“You have to keep selling something when you’re breeding to Bettor’s all the time.”

So it can be seen that Walsh and his wife Katrina have been through their share of ups and downs over the past decade with Reality Check.

But in nurturing what is now a Broodmare of the Year, they have certainly come a long way since setting out on their breeding path.

Della’s Speed didn’t raise too many eyebrows on the track, but a fine production record saw her crowned Trotting Broodmare of the Year recently.

The now retired 24-year-old daughter of Chiola Hanover won four races with one in Auckland while on lease to trainer Jill Coppins with Peter Ferguson driving her on each occasion.

She had been bred by Dave Phillips, who imported her Speedy Somolli dam Adella Lobell in the early 90s.

An 11-time Group One winner, Speeding Spur went past $1 million in stakes last season before heading to America over the winter.

The eight-year-old son of Pegasus Spur has been one right out of the box since he began racing as a juvenile in a crop which included Monbet and Prince Fearless.

As such it is interesting to note some possible ‘magic bullets’ in his pedigree.

There is an important double up to Speedy Crown, the sire of Pegasus Spur’s dam, while Adella Dash was also by a son of Speedy Crown in Speedy Somolli, a renowned source of speed.

The 3×4 cross to Speedy Crown is an important one because it is close up in Speeding Spur’s maternal lines, which tend to be far more important than crosses and double ups in paternal lines because the X or female chromosome is not passed from sire to son.

But further removed in Speeding Spur’s pedigree is perhaps another significant event – the appearance of the half-brothers Hickory Pride and Hickory Smoke no less than four times.

One of those is totally irrelevant, with Speeding Spur being a fifth generation descendant of Hickory Pride in male line through Yankee Bambino, Photo Maker, S J’s Photo and Pegasus Spur.

Speeding Spur’s dam Della’s Speed carries a 2×3 reverse sex cross to Hickory Smoke, with her sire Chiola Hanover being a son and her granddam Arcane Rainbow also by Hickory Smoke.

But where this gets interesting is the fact that Pegasus Spur’s grandam in Ima Lulu was by Hickory Pride, a Star’s Pride half-brother to Hickory Smoke.

Ima Lulu was a top performer herself, winning the 1976 Hambletonian Oaks while being a great rival of Petite Evander as an older mare in the late 70s.

But the most important mare in Speeding Spur’s pedigree is perhaps Misty Hanover, a 1941 foal and the dam of Hickory Pride and Hickory Smoke.

The latter was a 2YO & 3YO Trotter of the Year and won the Hambletonian and along with Hickory Pride, was a leading sire in North America, leading to Misty Hanover being inducted as an immortal into the U.S. Hall of Fame in the mid-70s.

Misty Hanover was just an average performer on the track herself, but no surprises she became such an influential broodmare when one considers her pedigree.

She was by Dean Hanover from Twilight Hanover, by Mr McElwyn from Rose Scott, by Peter Scott from Roya McKinney, by McKinney from Princess Royal, by Chimes from Estabella.

Guy McKinney and Guy Abbey (sire of Greyhound) were early standouts in this maternal line, while Roya McKinney was the dam of a top colt in Highland Scott, a top filly in Rose Scott and the highly influential Scotland, all three by Peter Scott.

This was quite outstanding blood back in the day and its influence on both sides of Speeding Spur’s pedigree should perhaps not be underestimated.