Clark Draft is Ready to Run 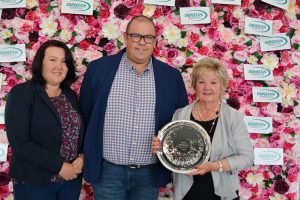 The name Niamey came and went as a racehorse without a lot of people noticing.

After numerous attempts at qualifying, she raced just the three times during the winter of 2003 and finished down the track each time after galloping.

Soon after she was sacked by co-owner/trainer Ken Barron who also had no interest in breeding from her.

But Niamey has been a revelation as a broodmare and recently she received the distinction of being the NZSBA’s Trotting Broodmare of the Year, this being the first year the organisation has also split their awards for pacing and trotting.

Pocaro was Niamey’s first filly foal and her first three foals are winners including Missandei (2, 1.59.3, 9 NZ wins, $180,000, G1 2YO Ruby) and Kings Landing, the latter a rising star and expected to resume racing around Christmas after overcoming a minor knee problem.

Trevor Casey and Gary Allen have been taking turns breeding from Niamey over the years, but the recipient of the award on the eve of Cup Day was her actual breeder Jenny Knight, the wife of veteran breeder-owner Ernie.

This was all a rather pleasant considering Jenny hadn’t had anything to do with the family for over a decade.

At one time there was nothing out of the ordinary about this family and Niamey’s unraced dam Game Flyer, although her third dam was the U Scott mare Ailsa Craig, who would lead to the likes of Tussle and Harriet Of Mot and those very good ‘sub families’.

The family had actually been going through something of an identity crisis leading up to Game Flyer as there was a lot of double gaited blood in the pedigree.

Game Flyer’s grandam Flying Ailsa was a daughter of Flying Song and Ailsa Craig, a daughter of U Scott and a Quite Sure mare who won five races as a pacer.

Go back further and one finds the noted mare Authoress (Wildwood-Thelma), the dam of a champion pacer in Author Dillon, but subsequent trotting blood in the maternal line would muddy the waters.

Flying Ailsa was bred to pacing sires and produced trotting winner Piclo (by Bachelor Hanover) and pacer Flying Princess (Play Bill), while her last two foals were the good trotting mare Ailsa Hanover (by the trotting-bred pacer Perfecto Hanover) and Flying Bay, a filly by the pacing-bred Bay Foyle who won three races as a trotter.

Game Flyer had been the first foal from Flying Bay and had been bred to Some Evander and Pernod Eden when she came into the possession of Knight.

“We were on the lookout for a trotting mare at the time and she was advertised in the Trotting Calendar,” recalls Jenny.

“The fellow that had her was dying and just wanted her to go to a good home.

“I’m not really into studying pedigrees and we bred Game Flyer to Chiola Hanover simply because we liked him – he was a well-performed trotter and we hadn’t had many of them.

“I just recall being a little concerned that Game Flyer was from a mare by a pacing sire.”

Game Flyer was in foal to Pernod Eden when she came under Knight’s wing and the resulting filly in Ikantry is the grandam of the very talented Woodstone (1.58.6, 9 NZ wins to date).

Knight bred Game Flyer to Chiola Hanover to get Africa and she would change the course of history so to speak.

Game Flyer produced a couple of other minor winners along the way in Game Pernod and Sunny Flyer, while her last two foals were useful trotters in Bo Didley (4 NZ wins, US1.56.8) and Willy Lightfoot (4 NZ & 9 Aus wins, $83,000).

Most of Game Flyer’s foals were dispersed to all parts and Africa was acquired as a youngster by Casey.

She was later taken back to Australia by the late Bill Mason but had only three filly foals before dying.

“Bruce Negus was training for me at the time and I’d asked him to keep an eye out for a good pacer for me,” said Casey.

“He said I don’t know about that, but I do know where there’s a good trotter.

“I had to think twice about that, but Africa turned out to be a wonderful little mare and twice finished second in an Inter Dominion Final.

“She got me into the trotters and these days most of my broodmares are trotters.”

Casey would wind up purchasing the next three foals from Game Flyer – colts by Gee Whiz and Sundon and a filly by Chiola Hanover – and while they didn’t amount to much on the racetrack, the filly was Niamey.

“Niamey was just a nutcase and drove Ken (Barron) mad, but she had a lot of speed and that’s been seen in a lot of her foals.

“I’ve sold Daenerys Targaryen to Ken Breckon and Missandei to Todd Anderson because you simply can’t keep them all and I’m trying very hard to reduce my breeding numbers.”

Since Allen bred Arnold, Casey has bred a filly by Majestic Son in Dance With Dragons, who was sold to Harvey Kaplan as a broodmare.

A brother in Regal Appointment was sold at the yearling sales and has shown some promise for trainer Gavin Smith.

Casey has had a three-year-old filly by Love You from Niamey in work with Barron, while a yearling colt by Sebastian K is currently being broken in.

“The filly has shown some ability but has been a bit wayward and the colt is a big horse, so I expect both will need some time.”

Allen also has a filly by Love You from Niamey and she is due to foal shortly to What The Hill for him.

Since Kings Landing, Pocaro has produced a filly by Majestic Son in Mercadante who was sold at the yearling sales to Alan Clark, while a two-year-old filly by Muscle Mass in Mexicana is in training at the All Stars and “goes nice”.

A yearling colt by Love You from Pocaro is called Dothraki and is also being broken in, but the mare had a dead foal by Father Patrick this season and Casey is unsure whether she can be bred from again.

“She can have this season off now and maybe we can look to ETs in the future, but to be honest I’m not sure if I need any more (foals).”

Ugly Betty, the two-win daughter of Earl and Niamey, has been a bit of a disappointment at stud for Allen and former trainer Dave Anderson and she was sold earlier this year to Otautau’s Dave Kennedy, while the first foal from Daenerys Targaryen is a yearling filly by Muscle Hill for Breckon.

What is perhaps interesting about all this from a pedigree perspective is the fact that Niamey was line-bred 2×3 to the half-brothers Hickory Smoke and Hickory Pride, their dam being the richly-bred Misty Hanover.

This Chiola Hanover-Game Pride cross is the same one which led to Special Force, Mountain Spring (10 NZ wins), Chiola’s Lass (10 NZ wins and dam of Allegro Agitato, Cabaletta, Skyvalley and Rondo), Rob The Nest (2006 Broodmare of the Year) and numerous other more than useful performers.

The dam of Speeding Spur was also by Chiola Hanover with a grandam by Hickory Smoke, meaning she had a 2×3 reverse sex cross to the latter, while the grandam of Pegasus Spur was by Hickory Pride.

Whether these standout performers were the results of ‘magic bullets’ will never really be known, but we do know that Niamey has been a much better performer at stud than she was on the racetrack.

Getting back to that Chiola Hanover-Game Pride cross however, due to timing there were plenty of foals about and while the overall results don’t appear anything out of the ordinary, it did also produce Chiola’s Lass (10 wins and dam of Allegro Agitato, Cabaletta, Skyvalley and Rondo), Mountain Spring (10 wins), Rob The Nest, Special Force and numerous other more than useful performers.

They included racehorses and broodmares and if one adds Africa and Niamey to the list or the mix, there is enough evidence to suggest that there was indeed something in doubling up to those half-brothers, and that perhaps Phillips might well have been on to something.