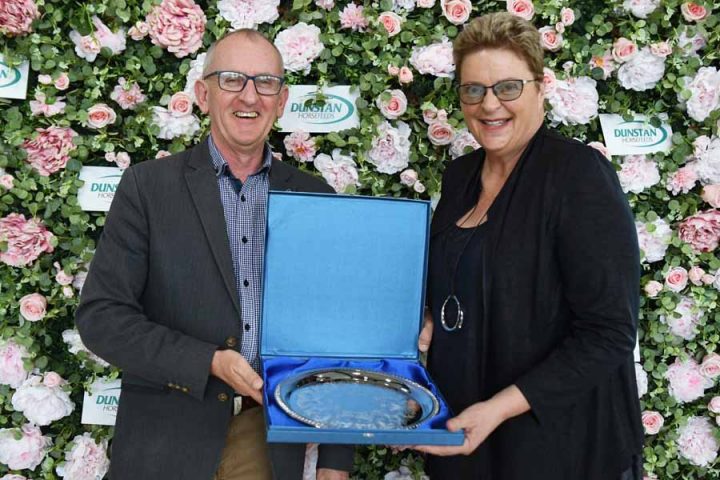 At the Dunstan Horse Feeds Breeders NZ Cup Eve Cocktail Function in Christchurch early November 2020, it was announced that DREAMY ATOM was the recipient of the 2020 NZ Pacing Broodmare of Excellence Award.

2020 is the second year separate awards have been made to both pacing and trotting gaited broodmares (as opposed to one overall award).

Dreamy Atom was the winner of six from twenty one starts (1:59.2, $108,810) for trainer Vin Devery including her first two career 2yo starts in Southland followed by a fourth in the Kindergarten Stakes and a fourth two year victory in the NZSS – 2f final. Named and awarded 1994 2yo Filly Pacer of the Year.

At three Dreamy Atom’s two victories were at Invercargill and in the Sires Stakes three year old fillies final at Alexandra Park. Retired after a brief four year old stint with Barry Purdon in Auckland, she set about making her mark in the broodmare barn.

Dreamy Atom’s dam was Lumber Lie, an unraced qualifier for Denice Swain at Ashburton in April 1990. She was the dam of eight foals, the first of which was Sokys Atom filly Dreamy Atom. Others of note included unraced Electrify (Holmes Hanover) who left Truer Memorial winner Lochinver (1:52.2, $302,448), grand dam of Tanaka Eagle (1:54.7, $261,411) and Islay 1:52.4US; (My) Happy Golucky (Cameleon), winner of the Leonard Memorial as a maiden at her third start, winning a further eight races in Australia (2:00.1AUS, $49,313) and her third winner Holmes Hanover gelding Costalot, winner of eight in NZ (Hawera/Kumeu Country Cups) and 1:54.3US in North America.

Tisadream, Dreamy Atom’s fastest progeny conceived when she had entered her twenties, with a 1:50.0 credit at 5/8ths Plainridge racecourse, USA. Winner of thirteen in Western Australia (1:54.6AUS) and ten in North America ($192,281)

Seven wins at three in NZ, the first three in consecutive starts, NZSS – 3f heat, Ladyship Stakes and NZSS – 3f Final were followed by a fifth to Tosti Girl in GN Oaks. Vin Devery trained her for the first win with Tony Herlihy preparing and driving thereafter. Success in two Nevele R Fillies heats at Cambridge preceded dual Group One victories at Addington in the NZ Oaks and Nevele R Fillies Final. NZ stake earnings at three totalled $228,379 before Western Dream travelled to Australia for the Breeders Crown. A heat winner at Kilmore, followed by a fourth in her semi-final and seventh in the final. Western Dream was awarded NZ 3yo Filly Pacer of the year honours. After a few starts at four without success she was retired to the breeding barn.

Western Dream produced seven foals for the Devery’s, the last three by embryo transfer. With five to race for the perfect five winner’s record, Western Dream’s main claim to breeding fame rests with her first foal, the Christian Cullen gelding “Western Cullen”. Bought back at the sales by the Devery’s, gelded and sold to Perth owners P & T Poli, Western Cullen’s five NZ starts for Mark Purdon and Grant Payne produced two victories in NZSS – 2 heat and Yearling Sales final plus a second placing in NZSS – 2 final and thirds in Welcome Stakes and Harness Jewels (Fly Like An Eagle).

On arrival in Western Australia, Western Cullen went onto record a further seventeen victories including a first start win in the two year old Group One Golden Slipper, one of nine wins at Gloucester Park. His distinguished career included a fourth in the WA Derby and sixth in Golden Nugget, amassing $447,536 in stakes and a best mile rating of 1:55.6 (1684m, Pinjarra at three).

At the end of her NZ campaign Amazing Dream’s record stood at eighteen starts for eleven wins (six Addington, five Alexandra Park; five Group Ones), $625,085, 1:54.9, 1980m at two. After establishing NZ records at 1980mM 2:21.4 (2yo fillies) and 2700mM 3:16.2 (3yo fillies/mares) and being named 3yo Pacing Filly of the Year, Amazing Dream undertook a short Australian campaign in Queensland. Second in her first race in late August after a 4½ month break between starts, she won her next Albion Park start in a career best 1:53.3MR (1660m).

At four he won on Show Day during the 2016 NZ Cup carnival, was third in the Methven Green Mile (grass) preceding his final NZ win in the Group Two Cambridge 4/5yo Futurity. A brief Australian trip yielded two Menangle victories including the Group Two Brian Hancock Cup before a final NZ campaign included a second in the Rangiora Classic.

In Australia permanently as a five year old, Lets Chase The Dream tallied another two Western Australian wins before being exported to North America in September 2018. His Australasian record totalled fifteen victories with best mile rates of 1:53.2NZ and 1:49.9AUS (Menangle). In North America, Lets Chase The Dream has recorded nine victories (two in 2020) in the past two years with a best mile of 1:50.2US that brings his total to twenty four wins world-wide for stakes just over $600,000.

Catch the Dream, winner of two races from twelve starts, both as a four year old at Alexandra Park (1:59.8) and Manawatu Raceway for trainer Brent Mangos.

Drum Major, winner of first of only two starts as a three year old at Alexandra Park for trainer Barry Purdon who had big expectations of him before he broke down.

Dreamy Atom’s superb record for the Devery’s is a testament to the prowess of exceptional horseflesh raised in Southland.