A taste of Honey! 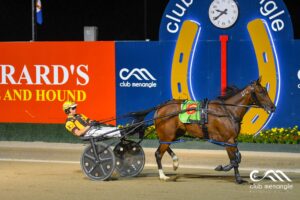 A bright future is being predicted for the Rock N Roll Heaven four-year-old The Honey Queen, whose success on Miracle Mile night at Menangle was her second winning run from four starts on Australian soil.

As a three-year-old, The Honey Queen showed marked ability winning seven times and being placed in the Great Northern Oaks and Queen of Hearts from 16 outings for Pukekohe  horseman Bunty Hughes and his son, Gareth.

She was owned by Bill and the late Kerry Callaghan.

“When Bill and Kerry decided to cut their breeding stock they offered Tosti Girl and her mother Delightful Paula to myself, my wife Pam and John Green,” Bunty said.

“They bred the first foal out of her, Precious M, who won a few races for Luke McCarthy.”

“Two of her foals died. One was by Somebeachsomewhere and the other by Mach Three,” Bunty said.

The sixth foal of Tosti Girl was none other than the millionaire pacer Thefixer (by Bettor’s Delight), the winner of 12 races including the 2018 NZ Cup and the 2019 Ballarat Pacing Cup and runner-up in the 2019 Miracle Mile.

Tosti Girl’s other winners have been Sir Tosti Mach, a Mach Three gelding who won three at Gloucester Park and $104,543, Precious M (by Red River Hanover), a winner of 15 races and $85,305, and now The Honey Queen.

Since producing The Honey Queen in 2017, Tosti Girl has left an American Ideal colt who suffered a respiratory disease as a foal and is not a racing proposition, a Bettor’s Delight colt who realised $100,000 at the recent NZB Bloodstock sale at Karaka and a filly foal by Captain Crunch.

Two of Tosti Girl’s non-winning daughters in Cullen’s Princess (by Mach Three) and Girls Are Bettor (by Bettor’s Delight) have bred on with marked distinction. The former ranks as the dam of the Menangle and Melton winner Gooddealehemily 1:52.9 ($82,039) and the Harness Million and Caduceus Club Stakes placegetter Miki Montana, while the latter has left the 1:52 Menangle victor Girls Are Best, unbeaten in four starts in NSW.

This family was founded in NZ by the Young Irvington mare Dusky Morn.

From the Patrician branch of it and to which The Honey Queen belongs, others in the NZ 2YO Filly of the Year Classical, the Australian Pacing Gold winner Park Life, My Kiwi Mate (Bendigo Cup), Paula’s Mate (Bunbury Cup), My Sweetchilliphilly (Bathurst Gold Tiara) and the top Tasmanian pacer Harjeet are also members.