All rounder Willis on the board at Ascot Park 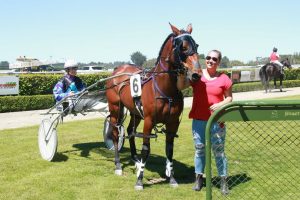 Southland horsewoman Brittany Willis is a star on the rise in the Harness Racing community.

The Branxholme lass had gone close to tasting victory recently when her pacer Honey Money produced top-five finishes in five of her previous six starts.

On Wednesday afternoon in the glorious Southland sunshine, Willis was able to record her first win as a trainer at her home track at Ascot Park.

The road to her first training success started back in June when she decided she was looking for a project horse to put in work, and went public with her quest to secure a suitable horse.

“I put a post on the Harness Racing Enthusiasts Facebook page saying that I was looking for a horse, perhaps one that had lost form or had some issues, as I was basically looking for a project type horse.

“A girl called Chantelle Kentish who worked for Robbie Holmes got in touch a few days later asking if I was still looking and said she had a horse for me,” said Willis.

Money Honey was bred by John and Katrina Price of Winton from an In The Pocket mare called Annabelle Me.

The Price’s had tried her as a young horse but she needed time and with plenty of young stock and yearlings for the sales decided to lease her out, which is how she ended up at Leithfield Beach.

Money Honey was well-schooled at the trials and workouts making 10 appearances before appearing at the races in June this year.

“They got her qualified in October last year and were pretty happy with how she was going, but when she came back in to work, she didn’t really want to be a racehorse and the connections decided to move her on,” said Willis.

“She’s a really really nice wee horse and lovely to have around, you can’t fault her in that respect. She was just very lazy and very quiet. When you took her out to jog her you had to slap her up to get her interested, but now she’s really come into herself and realised she’s a racehorse.

Money Honey’s road to the winner’s circle has been a slow burner with the mare running several honest races over the last two months, with those appearances including two thirds and a pair of fourth placings at her most recent race day starts.

She was sent out as the punters elect in the opener on the card at Ascot Park yesterday and duly obliged in the hands of Sam Ottley.

She didn’t get things her own way either, being forced to go back to last from a wide draw only to have to loop the field and sit outside the leader a lap from home. From there she was too good with the commentator rightly stating what was a well-deserved win for both Honey Money and her trainer owner.

“This is my first season training racehorses properly, prior to this year I have only really done young ones and broken them and taken them through to the trials. A lot of blood, sweat and tears have gone into getting that win and it means the world to me,” she said.

“I’m pretty meticulous with how I do things and there is no expense spared on any of my horses, and it’s been very rewarding.

Willis isn’t from a racing family or background but has grown up around different horse breeds. She fell in love with standardbreds when she was given a retired mare as a hack.

“I got my first standardbred when I was eighteen and fell in love with the breed.

“I moved to West Australia when I was 21 to work in the mines. On my week off I used to go and hang out with Graeme Bond who was private training for Allwood Stud at the time. He also introduced me to horse ownership with a few shares and had a bit of success,” she said.

The bug had well and truly bitten with Willis soon after purchasing her first broodmare, Kamwood Girl (Courage Under Fire – Kamwood Lass).

The daughter of Courage Under Fire had wound up over in Perth after six fruitless starts in New Zealand in Tony Herlihy’s care. She finished her career having won 11 races with 22 placings and over $100,000 in stake earnings.

“We bought her when she had retired from racing and took her home with us to breed from when we went back to New Zealand,” she said.

“My friends’ mother is actually Dianne Wood from Pukekohe who bred all the Kamwood horses and they also gave me my other mare, Kamwood Beauty after Dianne passed away.

The ‘Kamwood’ moniker started back in the early 1970’s when Wood started breeding from Bonny Roto (1958 U Scott – Bonny Brigade) and experienced some early success.

Wood’s third foal from Bonny Roto by Estes Minbar, a son of Adios, produced Kamwood Belle, a filly who features as the second and third dam of both Kamwood mares in Willis’ care.

The breed has produced plenty of nice horses without featuring any superstars to be fair, but the sales page includes the likes of Group One winner Kamwood Cully and Kamwood Laughter, the winner of 47 races in the United States and well over $350,000 in stakes.

The first foal by Art Major was qualified here for Willis in 2017 before being sent to Perth to be tried as a racehorse under the name Foveaux Major, the moniker stemming from Willis’ Southland roots with the Foveaux Strait not far away.

“We actually retained him. I qualified him and sent him to race in West Australia with a good friend of mine, Robbie Williams.

“He wasn’t much chop over there unfortunately,” she said.

“The second foal was by Washington VC (Foveaux VC) who we sold as a weanling to West Australia.”

He doesn’t appear in any official records unfortunately so not much to report at this stage, but fingers crossed he’s a Mighty Quinn waiting to happen.

“I’ve retained the two fillies I have out of the mare. I haven’t done anything with them to be honest, they’ve only really been broken in.

The two fillies are an unregistered three-year-old by Sweet Lou and a two-year-old by American Ideal called Foveaux Lexington.

The Sweet Lou filly will have to overcome some mild deformities in her legs to make a racehorse which were bad enough to see Willis consider having her put down as a foal.

The big-hearted horse lover couldn’t bring herself to do it and will give her a chance to see if she can make it to the track in due course.

The American Ideal filly from the mare couldn’t be any more different. A striking filly on type but unfortunately for Willis, she found out first-hand what a brutal market the yearling sales are with her first foray into the ring earlier this year.

“She is absolutely lovely. We took her to the sales and she never even got a bid which shocked me at the time because there was absolutely nothing wrong with her,” she said.

14 lots earlier Willis had practically given away a lovely Betting Line colt from Kamwood Beauty for $11,000 to Greg Payne.

What would have felt like a kick in the guts at the time has actually turned out to have a silver lining with Willis soon to join forces with Jeremy Douglas in a training partnership.

The pair will have a few of the ‘Foveaux’ stock to put into work alongside Money Honey and a few others which will provide a good platform for the young trainers to launch from.

They include a three-year-old cold called Foveaux Manchego (Betterthancheddar) whom Willis bred from Kamwood Beauty who has also had limited preparations or work done with him.

“We are going in together and we are going to start a team,” Willis said.

“We have got six in work and we are just getting the paperwork lined up.”

“We just opened a joint bank account yesterday because we had to have that first before we do the partnership papers,” she said.

“Debbie and Mark Smith are a great support to me. I met them because they weaned the first foal out of Kamwood Girl for me and that’s how I got to know them. They are like my second parents and have been a massive help and always encouraging me to go further with my passion,” she said.

“I do a lot of work with them come yearling sales time and if they have any horses that have any problems or need rehabilitation then they send them to me. They show me massive support and I really appreciate having them.”

Debbie Smith from Shard Farm Standardbreds is overflowing with praise when discussing the many equine talents that Willis has in her arsenal.

“She just has a natural way with a horse and never gets in any trouble with them,” said Smith.

“She understands how to feed a horse and has a real gift about how to handle a horse as well. She leads all of my horses in the yearling sales videos and on parade day and she is just a natural organiser who does the job and knows what I expect and what to expect.

“She never leaves any stone unturned and is very thorough. I would highly recommend her as a person who will do the job properly. I won’t hesitate to give her some of my team to break-in when the opportunity arises,” she said.

Willis is proficient in what the old school would term ‘radical therapies’ having a background an equine body worker doing red light therapy as well as equine massage practices such as ‘bowen therapy’.

“I gave her Yankee Shard for a period of time just to remodel his thinking because he was frightened after his bit breaking in a race, and he wouldn’t settle. She just took her time and took a month or so taking him down to the track and gave him Bowen therapy and massaging and the like. The first time we lined him up after leaving him with Brittany he ran second,” she exclaimed.

Willis doesn’t see herself having time for any yearling sales forays this year given how busy she is with her own dealings of horse therapy treatments and her new training partnership but intends to help out the Shard team where possible.

Having helped prepare yearlings for the sales and this year taken two of her own to the ring, Willis has loved being a part of the Southern Bred Southern Reared fabric that has dominated the sales in Christchurch over the last few years. The reasons for their success are evident to Willis when pressed as to what makes the group work so well!

“Everybody has to come together, work together, collaborate and be proactive and always moving forward. You can’t accept the status quo; you have to keep looking for new ideas and always striving to improve.

“It’s such a supportive group and Southlanders are such great people who are always building each other up. There is so much encouragement, it’s a fantastic group to be a part of,” she said.