While operating the leading trotting stable in New Zealand, Bev and Phil Williamson’s success as breeders may pale in comparison to their ability to prepare winners.

The Williamsons added another Group One title to their resume when Harry Stamper (Majestic Son-Dwindle Mist-Sundon) took out the New South Wales Trotters Derby at Menangle this month.

The win put a big thrill at the end of a long day driving to and from the Winton trots for Bev Williamson.

“We just got home from Winton and got in the door in time to watch him.”
“It was a great thrill, Phil always liked him and the new owners are rapt.”

The Williamsons are no strangers to Group One breeding success with Jasmyn’s Gift and her daughter Liberty Stride both Group One winners.

While Jasmyn’s Gift is enjoying her retirement after doing a big job at stud, there are plenty of broodmares among the Williamsons’ sizeable broodmare band.

“We have got 11 on the books, it is getting a bit out of control, really,” Williamson said.

Among them is Dwindle Mist, the dam of Harry Stamper, who is from a breed developed by North Otago breeders Clarrie and Lexi Porter.

“Phil and I raced her with Clarrie and Lexi and they moved on from the racing side of things.”

“But we have said to them they are most welcome to come back into breeding her.”

“They had some lovely horses like Young Pointer (Evander’s Gold) and we have had Sun Of Iris (Sundon) and Rhythmic Son (Sundon).

“They do have a really good breed.” 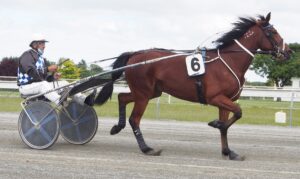 “Brad (Williamson) has bred the next one out of Dwindle Mist, she is a Muscle Mass filly and she has been broken in.”

The three-year-old is named after the main character in the 1998 film Armageddon.

“Phil said that Harry Stamper would make a great name for a horse because he is all go and no quit.”

“So, we saved the name for a nice colt.”

Harry Stamper won his last start in New Zealand at Addington stylishly before he was sold to Sam Castro, a client of Victorian trainer Joe Pace.

Pace has plenty of New Zealand breds in his barn including his stable star, Supreme Dominator (Bettor’s Delight).

The Williamsons have Dwindle Star (Muscle Mass) who is also out of Dwindle Mist, currently racing.

They have the Sundon mare back in foal to Majestic Son and she will be ready to foal a full brother or sister to Harry Stamper in the spring.