Skip to content
Dominant weekend for stock of Domination

Dominant weekend for stock of Domination 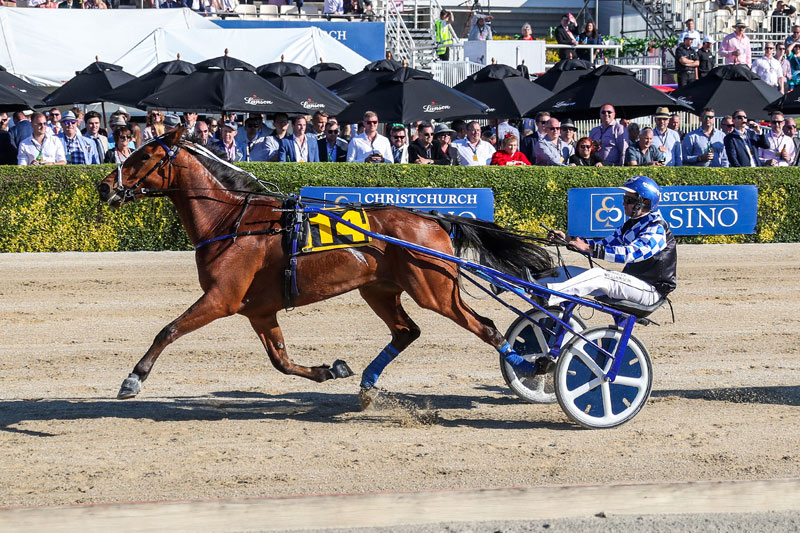 South Canterbury farmers Ray and Joan Scott, of St Andrews on the outskirts of Timaru, have raced some nice horses over the years.

Ray part-owned the smart Phil’s Gift prior to him breaking down. But for every Phil’s Gift there have been a few more that we did not hear much about.

Therefore it is weekends like last Saturday breeding double at the Invercargill meeting that make the perseverance all worthwhile.

The couple who have spent a lifetime in farming notched a breeding double on the same day from their former smart trotting mare, Domination 2002 B m (Sundon – Syndication).

“We were thrilled to get two horses win on the same day,” he said. “I bought a half share of Domination off Murray Tapper in 2007 and we had a lot of fun with her. She won about $90,000 altogether which was pretty good in them days,” he said.

Domination was out of the eight-win Greener Pastures mare, Syndication. Like her mum, she was an honest toiler and there is no denying the Sundon influence in lifting this breed.

Of the 10 foals out of Syndication, four of them won races, three of the four were by Sundon. Domination with her 10 wins is easily the best of them.

Although she did not start her racing career until the age of five, she more than made up for it with 96 starts across four seasons that also included 21 placings and four of her 10 wins at the home of harness racing, Addington.

“She won some very good races at Addington and beat Braig one night up there who was smart, but racing off handicaps wasn’t suiting her in the end, and we retired her to stud,” he said.

The first foal by Monarchy resulted in a pint-sized filly that was sold on the recommendation of Murray Tapper due to her smaller stature. What she lacks in size she makes up for in the ticker department and her win on Saturday marked her sixth win in five seasons of racing.

“We initially leased her to Debbie Shirley (now trainer/owner) and she persevered with her a lot and put a lot of effort into her, she’s had wind problems and all sorts but has done quite well,” he said. “All of Domination’s foals are slow away but she has a great turn of foot, Rydgemont Milly,” said Scott.

After failing to conceive for a season despite a couple of attempts, Domination was in foal in 2013 to The Pres, resulting in The Dominator.

“Steve Bell got The Dominator as we ended the breeding partnership after racing Domination together,” he said.

Trained by Bell’s partner Donna Williamson, The Dominator was slow in maturing but has come to show plenty of ability.

The now eight-win gelding has a great turn of foot when produced for one run and is not out of place in the Open Class trotting ranks when he puts it all together.

The next foal by Majestic Son produced last Saturday’s other half of the Domination double, Rydgemont Son.

“He’s a bit temperamental, but if he gets away he is very good. I presume you saw his effort on Cup Day?” said Scott

I certainly did, he cost me and plenty of others Pick 6, Ray!

Brad Williamson got him to step away safely before producing a peach of a drive to see Rydgemont Son score by three lengths going away from them.

“I said to Brad that we would like to have a horse at the races on Cup Day. We had not been for over 10 years because we are getting old. I said what are the chances of getting him in. We were lucky to get a start and did not expect him to win, but he flew home did not he,” said Scott.

He went a terrific race on Show Day going down a head to the people’s horse, Overzealous.

His effort to reel in the talented Davey Mac off 15 metres suggests there is plenty in store for the talented square gaiter.

“He made a good beginning which was probably the key to the win. Making a good start has been one of his problems,” said Brad Williamson

“Ray decided to give Rydgemont Son a go in my stable because he was galloping a lot for Murray. The horse had always shown ability. At our Oamaru trials I remember him qualifying and Dad said he quite liked him then.”

“I told Ray a long time ago that by the time he’s had thirty to forty starts be may be a good genuine standing start horse. Ray joked and said he would be dead by then,” said Williamson.

The next foal by Muscle Hill went through a fence as a young horse and badly hurt her neck, with the filly at the time lucky to be spared from her injuries.

She was by all accounts a lovely type but was sold to Bev Williamson as a broodmare with her value getting better by the day.

“Looking back, we should have kept her because she was a lovely filly to have on the farm and she was a beautiful looking horse too,” he said.

“I’m in my 80’s now and didn’t think it would be wise to wait another three years breeding, so I’ve rolled the dice and bought into a few and it seems to be paying off.”

Rydgemont Son is not the only horse in the Brad Williamson barn with the association now a solid one for both owner and trainer.

Williamson unlike his brothers did not have the same luck in timing with both Nathan (Springbank Richard) and Matthew (Leighton Hest) experiencing the Group One thrill early in their driving careers. Unfortunately for Brad that has yet to eventuate and is parallel with his father’s lean run in the Open Class ranks in recent times.

Majestic Man has probably provided him with his best chance in Phil’s colours. The talented gelding has just run into one or two better than him on the day: Sundees Son and Winterfell come to mind.

Despite this, Brad has forged a very solid driving career of his own.  He is now making every post a winner as a trainer going from taking others hand me downs, to purchasing and syndicating from the sales with owners now all but lining up.

“Ray is a legend, he’s just been at my place for a few hours today watching his horses,” said Williamson.

One of them being boom three-year-old trotter, Cracker Hill.

The Muscle Hill gelding was passed in at the sales and was one Ray was keen to buy outright himself.

“I’m not getting any younger and I had sold some shares at Synlait for around $10 each so I was keeping my eye on a few I liked by Muscle Hill. He was passed in, but I was away overseas at the time otherwise I would have bought him myself,” he said.

If it were not for Bolt For Brilliance and then Covid19, Brad Williamson would have bagged a training/driving credit in a Group One this season with Cracker Hill undoubtedly the best of his crop.

Ray is not complaining though and considers himself lucky to finally have a trotter good enough to compete on the grand stage.

“I’m an old man and all my luck is coming at once,” he laughed.

“He’s going to quite well, he’s been to one workout at Ashburton already and he was in a learners heat at Oamaru yesterday. Brad hopes to qualify him as a two-year-old, but we are not too worried about it. He’s got a got turn of foot and will make a nice trotter,” said Scott.

Unfortunately for Ray and Joan, Domination had to be put down two years ago after suffering an injury.

“She got hurt in a paddock accident where a horse kicked her in the leg down low and shattered it. It was a bugger because everything she left has been good,” said Scott.

With one door closing another one has opened, and the next generation are being put through their paces and Ray and Joan are hopeful they have their next Cracker Hill waiting in the wings at Brad’s place.

Williamson spent $80,000 on two Muscle Hill yearlings at Karaka and you get the sense Ray is a little bit excited about them.

“We’ve got shares in One Tree Hill out of Landoras Pearl and Hill of Grace who is out of Whitney. I am an old man now so I thought I better go to the doctor now while I can,” said Scott.

“We’ve had a happy life, it’s an expensive hobby for a one-man band but it’s a fun one too,” he said.