Tony Barron will have all bases covered at next month’s Australasian Breeder’s Crown following his Group One success in Australia over the weekend. 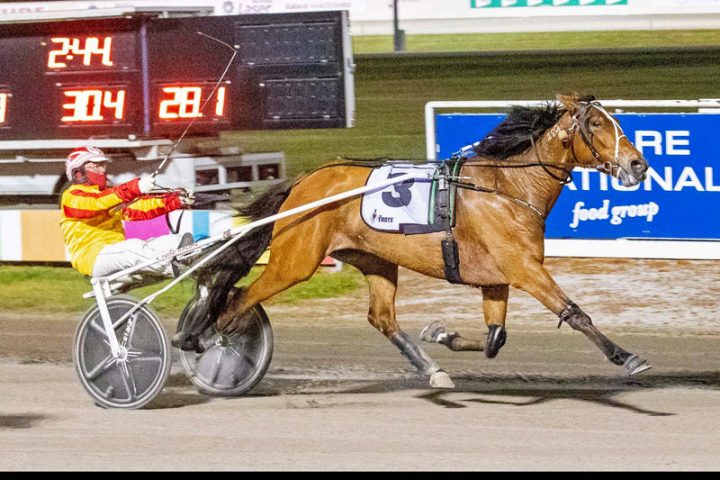 Barron scored Group One win number two as a breeder and owner when Queen Elida (Love You-Queen Kenny-Monarchy) took out the Victoria Trotting Oaks at Ballarat on Saturday night. Barron races the filly with wife Cheryl and southerner Gordon ‘Boof’ McKenzie and his family.

The breeder-owner watched on from home as his filly dug deep to win the classic event after doing plenty of early work for driver Chris Alford.

“She worked off the gate, worked going out of the first bend and worked at the end, so she went super really,” Barron said. “We had the family here and it was bloody good, we were roaring and we had a few beers afterwards.”

Saturday night’s victory continued the brilliant success that the Barrons and the McKenzies have enjoyed with Queen Kenny. A smart racemare and Group 1 placegetter in the Rowe Cup, Queen Elida is her first foal. Her second is New Zealand’s all time highest priced trotting yearling in Queen Elida’s full brother, Toro Stride.

Barron spotted Queen Kenny after she ran a decent race without winning when she was a maiden in Phil Williamson’s barn. Deciding to approach Williamson and enquire about buying the mare has continued to pay massive dividends years later.

“It has been a huge turning point in my career, it was one of the great days in racing for me, really.”

“It has been the aim for the past 12 months to have both of them there. We are looking forward to it but we know it is not going to be easy.”

The Barrons and the McKenzies have a yearling full sister to Queen Elida and Toro Stride, but there won’t be another one coming any time soon. The Monarchy mare is in foal to What The Hill and is going back to the freshman sire this season.

“She is due to foal in November, we missed to Love You and we tried Father Patrick a couple of times. In the end we gave up on frozen (semen) and went to fresh. I said to Boof I don’t care what she gets in foal to, just get her in foal.”

Toro Stride’s sale has headed the excellent recent results Barron has produced at the NZB Standardbred Yearling Sales. The breeder is approaching a quieter than usual year in 2022. Barron has a Downbytheseaside filly from Gabriel Marie, an Art Major filly from Christy Breanna and an Art Major colt from Elite Medley entered in the Christchurch sale.