Skip to content
Barron the breeder continues hot run in 2021

The daughter of Love You and Barron’s Group One placegetter Queen Kenny zoomed home from three deep on the pegs to win the Need For Speed Princess Final at Melton for trainer Brent Lilley and driver Chris Alford. 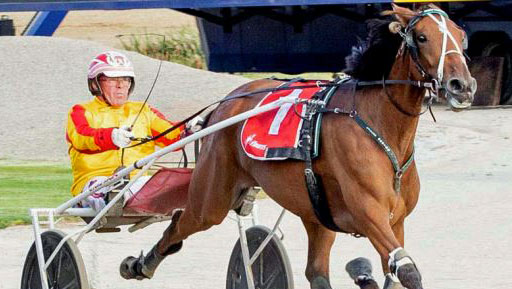 When Alford extricated the filly from a horrible spot on the home turn he helped Barron realise one of the few ambitions he had left after more than three decades in harness racing.

“We took her over there for the fillies’ races and to try to win a Group One.” Barron said. It is not often a big plan comes off, but it has so far.”

“We are absolutely over the moon: it has been a great couple of weeks.”

“We have had quite a few placings around the Group Ones. Shezza GNP ran second in the New Zealand Standardbred Breeders Stakes and Queen Kenny ran third in the Rowe Cup. Global Domination ran fourth in a New Zealand Derby and Delightful Dash and a few others have been fifth in the Jewels.”

“We have been knocking for a few years and we haven’t been able to get it. It was a thrill of a lifetime, really. It has been a lifetime goal, it has been 35 years in the industry and I had two aims to go.”

“One was to win a group one and the other was to train 500 winners. So I am not far off that, I am only about 25 off that. We will just tick away. It will take a few years with the size of the team and we still sell them too. But we are very happy with where we are sitting,” said Barron

Queen Elida had a handful of starts as a two-year-old before Barron and his wife Cheryl and their co-owners, Gordon McKenzie and his family, decided to send the mare to Lilley’s stable. he opportunities for a three-year-old trotting filly in Victoria were simply too good to turn down.

“We are absolutely over the moon,” said Tony.

Queen Kenny keeps delivering for Barron more than seven years after she was purchased from Phil and Bev Williamson.

Though she was already a performer in Group One races on the track, the mare’s name rung out much further across the industry when she produced the highest priced trotting yearling ever sold in New Zealand at the NZB Standardbred National Yearling Sales last year.

Just days after Queen Elida’s win the colt, who is her full brother named Toro Stride, ran to his second trial win at just his second attempt for trainer Phil Williamson.

“It has been a great couple of weeks.” Barron said. “We have had Queen Elida’s win and then her full brother, which we sold last year, qualified. The yearling sales of course, we got good money for the colt out of Cullen Who.”

“And I have even got a share in a galloper with Bjorn Baker in Sydney and it just won at the trials.”

Barron and McKenzie have bred three Love You foals from Queen Kenny in Queen Elida, Toro Stride and a yearling filly named Queen Bea. Queen Bea did not go through the sales ring this year and will be retained for breeding, as will Queen Elida. The filly is being broken in and Barron likes what he see so far.

“She is a cracking filly, a very, very nice filly.” Barron said.

Queen Kenny did not get in foal to Father Patrick last season which is partly why Barron expects to have a quiet year at next year’s National Yearling Sales.

The Monarchy mare was back on track this spring and is carrying a What The Hill foal.

Tony said “we are going to have quiet year next year on the sales front, but it is pretty exciting with the five that we have got in foal.”

Barron’s five expectant mares include Katys Art, the first foal from former Group One winning filly Katy Perry, who is in foal to Captain Crunch. Lis Mara mare Christy Breanna, the dam of Global Domination is in foal to  American Ideal.

Barron and his partners in Cullen Who, including McKenzie and race-caller George Simon, sold a Bettor’s Delight to Robert Dunn’s Diamond Racing Stables for $130,000 at this year’s NZB Standardbred National Yearling Sales in Christchurch.

Barron and his wife retained their Bettor’ Delight colt from Christy Breanna.

After producing six figure yearlings in at the last two national yearling sales, the Barrons have their breeding operation exactly where they want it.

Life is a long way from where it was a decade ago, training a large team in Southland. And Barron is enjoying the ride.

“I still enjoy doing a small team, just eight or ten to give us something to do and to have the fillies coming through.” said Barron.

“But I am really enjoying the breeding side of it, it is like everything it has its ups and downs. We love it and we have some lovely young mares. We are now to a level where we wanted to be. It has taken a few years but we have got there.”

“We had a great pay day last year and another good one this year.” said Barron.

Mary Austin looks a realistic chance of adding some more black-type to Barron’s record. The two-year-old was solid in her debut before tiring at the end of a hectic running of last weekend’s Leonard Memorial Stakes. Barron is hopeful the filly can bounce back to the kind of form she showed in her first start.