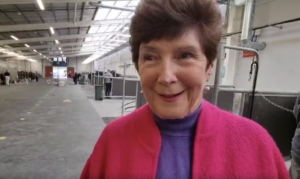 The Halswell (Christchurch) resident was gifted a yearling purchase at the 2014 Christchurch Premier Yearling Sale by her husband, Graeme.

“Even though we had been breeding since the 1980s that was the first time I’d ever gone to the Sales. We paid $15,000 for a lovely bay filly named Edge – which we thought was a good price.

“We had her marked out because I always wanted a Christian Cullen filly, and there she was. I was ecstatic… then disaster struck,” Mrs McMaster said.

She explained that a couple of Christmas’s later Edge and three other horses wandered onto the road.

“Edge was killed instantly. She was potentially the best of the four as well. We loved that horse. It was devastating – like losing a family member.

“We loved the family line so much, and after a bit of thought we decided to buy the mare (Raza Sharp) off Nevele R Stud,” Mrs McMaster said.

“We bought Raza Sharp in foal to Badlands Hanover. The resulting foal was Real Sharp, who won his first trial, but then had to be put down after suffering from a bone disorder,” Mrs McMaster said.

But going by the result of race one at Addington Raceway on Friday (April 1), Raza Sharp’s best and last foal – Bettor Be Sharp  (Bettor’s Delight) – has announced himself.

After three seconds and a third from four starts, the Gerard O’Reilly trained and driven gelding has won his first race. The 3-year-old, who was bred and is owned by Mrs McMaster, overcame the 14 draw to get up and win by two lengths.

“I was on-course to watch him win. I thought he might go close because he had good form going into the race and had been beaten by favourites in his previous runs.

“I’m still reaping the rewards of my birthday present all those years ago. I just love Addington Raceway. We don’t live far away, but it’s one of the highlights of my life racing there. I just love the place and the atmosphere, and it’s so great to be back after all this Covid,” Mrs McMaster said.

Raza Sharp, who had two unplaced starts in 2011, has now left six foals, with Bettor Be Sharp the last of them.

“We haven’t bred from her since 2018, but we are tempted. Perhaps next season we might have her served by Lazarus. It’s just an idea at this stage, but the mare is only 13 and has plenty of breeding time left in her.”

Raza Sharp was the seventh foal of 11 out of the unraced B G’s Bunny mare, Gretna’s Girl. Her older Albert Albert half-sister, Bachelorette, who was bred by Sid Holloway, won 10 races and $92,792.

Mrs McMaster said she and her husband were introduced to breeding by fellow Cantabrian, Brian West, back in the early 1980s.

“Graeme and I decided to buy two mares from the Yonkers Syndicate, which we were in, when it wound up. One of them was Kirriemuir, and we are still breeding from that line today,” Mrs McMaster said.

In fact, her great grandson, the 2-year-old Art Major colt, Smoke On The Water, just started his racing career with a 10th at Addington Raceway on March 18.

Smoke On The Water’s dam, the 20-year-old Fake Left mare, Left In The Dark won four races. In turn her mother, the 1989 Holmes Hanover – Kirriemuir, mare Keep It In The Dark, won one race.

“Smoke On The Water has a little yearling Vincent brother as well, so we are kept busy with our horses.”

So, who’s the best horse the McMasters have bred?

“We are hoping it will be Bettor Be Sharp but Born To Run and Little Lion Man come to mind.”