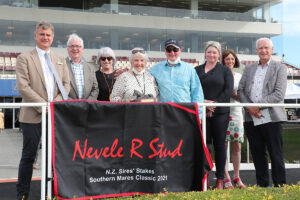 A $1000 purchase keeps paying off for Canterbury breeder-owners Steve and Maureen O’Brien.

The victory was a continuation of three generations of success for the O’Briens with the filly’s family.

“Bob McArdle recommended her to us and she went on to win half a dozen races.”

The grand dam O’Brien was referring to is Natural Talker (Andrel-Talk About Natural-Talk About Class) who was good enough to contest the Australian Oaks amid two trips across the Tasman in the late 1990s.

By Andrel, Natural Talker wasn’t an instant success in the broodmare barn.

O’Brien trained the mare to win six races, winning four as a three-year-old as well as lining up in the season’s Group One features against the likes of Carabella and De Lovely.

The pacer won four for Mark Jones and has won two more after being sold to Australia.

Another full sibling to the pair of winners died before Bettor Talk Art came along.

“It has been a bit of a slow breed but it is going pretty good now,” O’Brien said.

Her continual progress saw her qualify for the Southland Oaks before taking out the Group 2 feature last season.

“I think Regan got a bigger thrill out of it than we did,” O’Brien said.

“He has done a great job with her and he has looked after her.”

The O’Briens have a full sister to Bettor Talk Art in work with Todd, who regardless of her ability looks to have a future as a broodmare going by her sister’s achievements.

Bettor Talk Art has sealed her future in the breeding barn but has a lot more to do on the track before.

“Hopefully she can win a few more races, we don’t want to take her to Auckland so we will keep her around here.”