A decision to buy back into the Black Watch family continued to pay dividends for Southland breeders Paul and Brendan Duffy at Addington on Friday night. 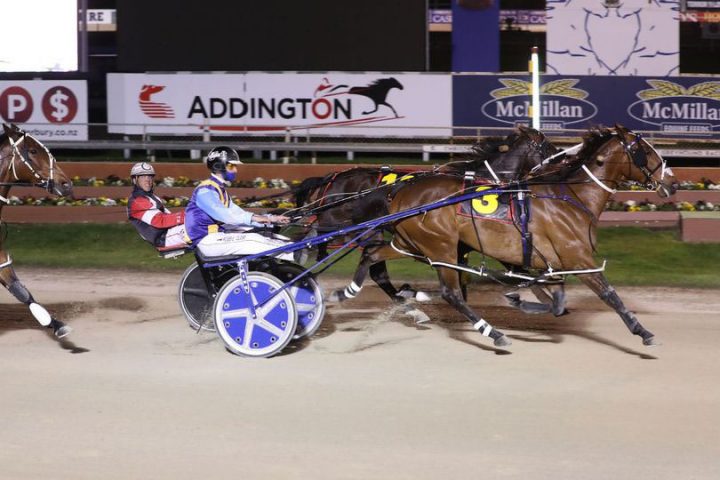 Yorokobi gets up to beat Jagara at Addington

The Seaward Downs father and son owner-breeders combined with trainer Regan Todd, formerly from just down the road at Wyndham, to produce Yorokobi (Bettor’s Delight-Rockin Cullen, by Christian Cullen) for a smart first up victory at Addington on Friday night. Yorokobi, a two-time Group 2 placegetter in the Flying Stakes and the Southern Supremacy Stakes, is a full sister to Nutcracker, a Group 3 winner at Ascot Park in her only career start as a two-year-old, last season.

The siblings are the only two foals to have raced from Rockin Cullen, who the Duffys bought because of their family’s previous association with the Black Watch family. Before Black Watch began her dynasty, previous generations were developed by the Duffy family in Southland. The Duffys lost their connection with the breed that was taken to national acclaim by the Yarndley family. They got it back when purchasing Rockin Cullen from a dispersal sale of Ian Dobson’s stock.

“My granddad’s brother had the Black Watch side of it and it sort of stemmed from there, really,” Brendan Duffy said.

“The Bettor’s Delight-Christian Cullen cross was going pretty well, so we thought we would spend the money and try our luck after we got Rockin Cullen. It is paying off at the moment, we were offered pretty reasonable money for Yorokobi at the end of last season.”

“But the old man (Paul) is at the age where he likes to see them go round and it is pretty exciting to breed them and race them.”

After winning three of her 16 starts, Rockin Cullen has gone to Bettor’s Delight in every breeding season since, except one year when she had an Art Major colt.

“She has done a reasonable job so far, there is a rising two-year-old by Art Major out of her. He has just gone into work: he will have six weeks and then we will decide if we press forward or if he needs a bit more time.”

“She is definitely throwing them on the right side of the fence, anyway.”

Nutcracker impressed when winning her only start in the Group 3 Southern Fillies Classic last season before being put aside.

“She is due for a workout soon. She had a wee virus that set her back a week or two, but she is due for the workouts in a week or two.  It will be good to see how she has come back, she isn’t a big horse but she has a pretty big ticker in there, I think.”