Skip to content
Bodrum Boy gets Godfrey back on track

Bodrum Boy gets Godfrey back on track 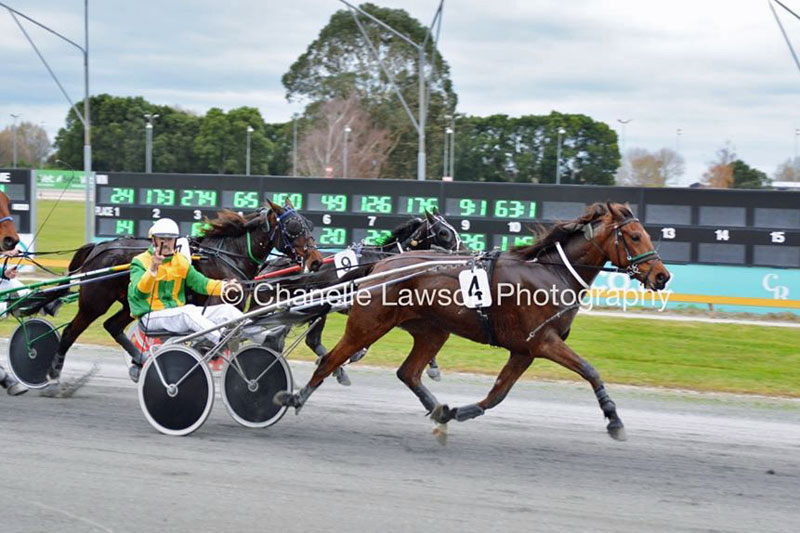 John Godfrey is a name not many casual harness racing fans or breeders in New Zealand would be familiar with.

Not because he hides from the spotlight, but simply because the Roto O Rangi dairy farmer from the Waikato does not like to have too many horses around him.

A hobby that has spanned more than a few decades, a training licence and a life membership at Cambridge for 26 years of service on the Bay of Plenty/Waikato Harness racing committee.

“I got involved through my father who had a horse called Prince Tartan (1965 g Prince Calumet – Mary Mayfield) who Kelvin Primmer used to train. I was going to get my driver’s licence but when my father passed away I took out a trainer’s licence instead.”

Godfrey did so in 1984, but as with many things that we call a hobby, other areas of life took precedent and Godfrey sparsely lined another one up again before the new millennium.

“Because I was on a dairy farm and had a young family I got Kevin Shaw to train a lot of my stock for me as well,” he said.

He trained his first winner in 1999 by virtue of his good friend, the late Colin Webber.

Webber had given him Ryan’s Flight (1993 B g Tuapeka Knight – That’s My Dream) to train and he was able to salute the judge at Bay of Plenty at his third start at odds of 40/1.

Webber was also responsible for getting Godfrey involved in the breeding side of the game which is the source of Godfrey’s latest training success.

Bodrum Boy was a debut winner at the first Cambridge meeting post Covid. He was able to lead from barrier five before handing up and taking a trail and easily put paid to his race-day rivals up the Brogden Transport passing lane.

The son of American Ideal was bred by Godfrey out of an Astreos mare called By The Stars, who he acquired through another good friend, Sean McCaffrey.

“Sean went down to the dispersal sale and rang me up saying he had bought a filly that he thought would be perfect for me. I said well you’re a better judge than me and I ended up taking her home for around $5,000.”

“He helps me quite a bit Sean. I don’t break horses in or anything, I let him do all that sort of work for me,” he said.

“Her grand-dam was Sakuntala and her mother, Tuapeka Royale, was a six-figure purchase as a yearling at the Yearling Sales.”

The Sakuntala family needs no introduction, but her daughter Tuapeka Royale might take some specking.

I can’t confirm but it is said she was a $180,000 yearling sales purchase. Sadly, she could barely run fast enough to get warm and the Halligan’s who bought her did their dough cold with three unplaced runs before retiring her.

Given she was by Lordship out of Sakuntala, and the many branches of the Sakuntala family that have gone onto dizzy heights, you would be forgiven for thinking she might leave one at stud with some ability.

Inexplicably Tuapeka Royale had three to the races for nine foals and only two winners.

The stallions she was bred too weren’t what you would call top shelf, however the history books have little room for hard luck stories.

The next daughter of Sakuntala (Tuapeka Vale) was sold at a fraction of the price, went 1:56 on the track and left dual NZ cup winner, Monkey King.

How about them apples.

The lack of runs on the board for this branch of the family undoubtedly aided Godfrey in getting his filly so cheaply.

The Astreos mare won three races and had nine placings, but never went as good on the grit as she did her preferred grass surface.

You could say she had little option but to love the grass being worked on the paddocks of Godfrey’s Waikato dairy farm. However, there were underlying reasons for the preferred surface of the mare.

“By The Stars was really tough. She was really good on the grass, but on the hard track lacked a bit of speed. On the grass she was a different story.

“Like her son Bodrum Boy, she would hit the ground so hard with her feet she developed a lot of problems with her toes. I actually got her fit on my farm just working her there and never went near a hard track.”

Colin Webber had a good mare called Aitch Ar (1994 B m Cam’s Trickster – Royal Chevalier) who won four races for him back when he was training.

He asked me one day do you want this mare? She arrived the same day he phoned me,” laughed Godfrey.

The one and only foal Godfrey bred out of the mare was called Chequeme Rosie which was a fitting name given how honest she was.

The Julius Caesar mare was responsible for more than half of Godfrey’s training wins to date with six and 16 placings.

“She was probably better in the cart then out of it and on the shorter trips she was always there because she had a wicked sprint,” he said.

You might question why she was never bred from by Godfrey, nor the dam but again that lends to the nature of his career and family commitments and the breeding and training being just a hobby.

“I was breeding from By The Stars and I thought her pedigree was better, to be honest. They just multiply too quickly and I never like to have more than one in work,” he said.

“I had a stipe round here last year inspecting my training facilities and we had a bit of a laugh because he said I’m not presenting them to the races very often.”

“I told him that’s because I’m only breeding from one mare every couple of years and some of them don’t make it to the races,” he laughed.

Last month’s winner Bodrum Boy almost went down a similar line as his older sister by Real Desire who ,although showed ability, bowed a tendon and was then destined to be a hack.

Bodrum Boy was at the trials in 2017 as a two-year-old but after bruising up in the front of his feet like his mum, he had a two-year layoff in public appearances before being presented prior to Christmas.

“He’s gone sore on me three times which is what took him so long to get to the races.

“Sean said he should have won his qualifying trial before Christmas, but he couldn’t get the plugs out,” he laughed.

“He won his first workout after lockdown with Sean in the cart and then he said to me that I had to drive him because he had one of his own in. I guess when he won with me in the cart it didn’t help his divvy last week.

I always knew he had ability because on my track you barely had to move on him, and you were three laps holding on to him. You get other ones that your tapping up all the time to get them to work, and he is just a bit different, I guess. He is a nice horse,” he said.

Picking up the maiden win at his home track and one that he is a life member made the breeder/owner/trainer success all that much sweeter.

Godfrey has an Auckland Reactor filly out of By The Stars with Sean McCaffrey who should by all accounts make the grade. He has designs on sending his mare to stud for her fourth foal in the near future.

“I don’t know who I’ll send her too yet, but I’ll wait for your catalogue to come out and make a decision,” he said.

We should all look forward to seeing who Godfrey mates his well-bred mare with next.