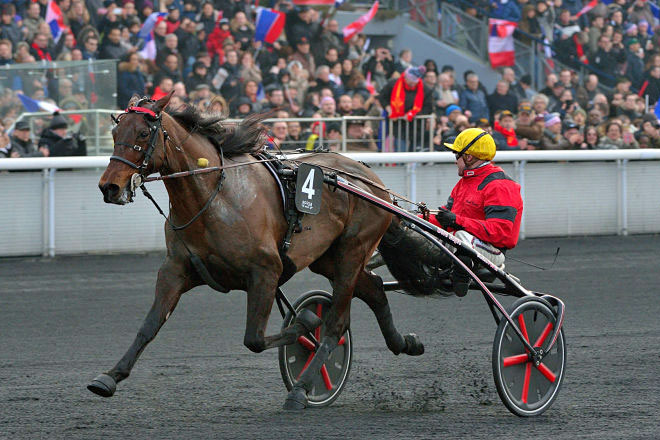 Champion French trotter Bold Eagle is joining Haras Des Trotteurs’ stallion roster this year. In a coup for Australasian breeders, this will be the first post-racing career season at stud for the soon to be retired son of the great Ready Cash.

Bold Eagle is not only regarded as one of the best of his generation in Europe, but one of the all-time greats.

Haras Des Trotteurs general manager Louise Toulmin said it was a huge thrill for the Ballarat-based operation to secure Bold Eagle for the upcoming season. “It’s a wonderful opportunity for our industry,” she said. Toulmin said while frozen semen for Bold Eagle would not be available in either Australia or New Zealand until mid to late October, the good news was he had exhibited outstanding fertility to date and there should not be any limit on the number of services available

Bold Eagle has developed a cult following in France in a racing career in which he has become the third all-time richest earning trotter in the world – winning 46 of 75 starts for almost 5 million euros in stakes and with a career-best 1:49.2 mile rate.

Bold Eagle began his run of group 1 victories in 2014, but it was in 2017 that secured his place as an exceptional talent. He won the Prix d’Amerique, Prix de France and Prix de Paris at Vincennes to become the first French trotting triple crown champion since Bellino II in 1976.

Bold Eagle, which was foaled in 2011, also won the Prix d’Amerique and Prix de France in 2016.His other big wins have included back-to-back Prix de l’Atlantique in 2017 and 2018, the Prix Rene Balliere in 2016, 2017, 2018 and 2019, and then the Breeders Crown in Canada in 2019 in his first visit to North America.Bold Eagle is already a successful sire Europe, having mixed racing and stud duties since 2015, with group 1 winners among his progeny. French-bred Ready Cash has become an exceptional sire after an outstanding racing career in he won 40 of 70 starts for 4.28m euros, with group 1 victories including the 2011 and 2012 Prix l’Amerique, 2011 and 2013 Prix de France and 2013 Prix de Paris. He is the dominant stallion in France, last year producing the winners of 239 races .Bold Eagle is out Love You mare Reethis Rah Jet.

His racing career featured wins in the 2015 Le Grand Prix Continental 2015 and Prix d’Europe in Italy, and earnings of 958,000 euros. Briilantissme has made an impressive start to his stud career in the highly competitive French breeding scene.

He was the leading first crop sire in France last year and second to his sire Ready Cash in the two-year-old age group category.

Brillantissime will be only available in Australia this year, in limited numbers, but his semen is being frozen for Australia and New Zealand for next season.