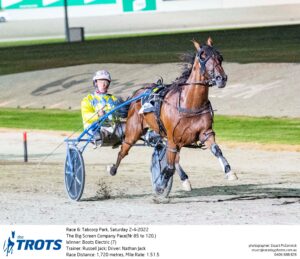 Boots Electric, regarded as one of the best young stayers in Australia at the present time, is a New Zealand bred five-year-old gelding with an interesting and successful family background.

Bred by sheep farmer and hobby breeder Paul Hailes, of Balfour, Boots Electric is by the champion colt pacer and sire Somebeachsomewhere from Glenburn Jewel, a Northern Southland bred mare by Live Or Die.

Boots Electric belongs to a line established by Paul’s late father Eddie Hailes more than 60 years ago and extending over four generations.

Ronella, who won five including the 1957 Winton Handicap, had earlier produced Lord Avon (7 wins) and Petronella, the dam of six winners including the NZ 3YO Flying Stakes winner Vita Man and the ancestress of Inter Dominion champion and A.G. Hunter Cup winner Tiger Tara, A G’s White Socks, Power Of Tara, Stingray Tara, Lachie Maguire and many others.

Newella (by Newport Chief) left only one winner in Hayley’s Hero, who took a mile mark of 1:59.6 in North America, while another of her progeny, Greg’s Delight, figured as the sire of the 1988 Winton Cup winner Glenburn Star (1:54.4).

Bretella, the 10th and last foal of Newella, produced the dual Gloucester Park winner Glenburn Prince (2:00.1) and the Adelaide victor Glenburn Flame and was the grand-dam of the exported Glenburn Comet (1:54) and the lightly raced Glenburn Rose.

“Boots Electric is the best horse by a long way from the Newella branch of this family. Chesterton was a pretty smart pacer but was unsound. He finished second to Auckland Reactor in a Group 2 at Auckland one night,” Hailes said.

Since producing Boots Electric in 2016, Glenburn Jewel has left a Captaintreacherous four-year-old in Aardie’s Captain, a Sweet Lou three-year-old colt named Redcastle, who was trained by Kirstin Barclay but has a knee problem, and a filly foal by Always B Miki.

“Glenburn Jewel has been retired but I’m breeding from one of her daughters, Glenburn Joy,” Hailes said. “I’m hoping to get her into either Tall Dark Stranger or Bettor’s Delight next season.”

“Glenburn Joy’s first foal the two-year-old Zamperini (by Sweet Lou) ran third in a recent workout for the Nathan Williamson barn but has been put aside for a good spell to strengthen and develop. She has a Betting Line filly just weaned and is in foal to Downbytheseaside.

“Smokin Annie, who is leased to Michael House at the moment, will come back to me in the spring and probably head to Always B Miki.”

Debnita Rose, a Mach Three half-sister to Glenburn Jewel, is being bred from by Hailes in partnership with his brother-in-law Caine McIntyre, of Macca Lodge, and journalist Jonny Turner.

“Her first foal Southside Of Heaven (by Rock N Roll Heaven) showed promise when being prepared out of Macca Lodge. Her second foal a colt by Betting Line sold for $29,000 at the yearling sales to Kirk Larsen. She missed to Bettor’s Delight then Tall Dark Stranger last year but will head back to Bettor’s Delight this spring,” Hailes said.

Another of Hailes’s broodmares is Bella Cara, a Well Said half-sister to six sub 2:00 winners including the Group winners Am Opulent (1:54.9) and Dibaba (1:51.6) which he is breeding in partnership with Macca Lodge.

“Bella Cara has a racy, wee Fear the Dragon yearling colt soon to be broken in at Macca Lodge and is also in foal to Downbytheseaside,” Paul said.