Breeding Double for Rose at Waikouaiti 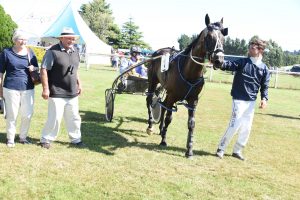 The old saying that change can be as good as a holiday rang true when Regan Todd took two well-bred half-sisters and produced them to win first up in his colours.

The great benefactor in all of this were long time industry participants Alan Rose and John Howe.

Elation is a word not often used to describe the feeling on a racetrack, but Rose admits to having no embarrassment in saying that the tears were flowing in the birdcage.

“I had a friend ring me up that I haven’t heard from since school days and he said, to win one race in a day is marvellous. But to win two races in a day is champion,” said Rose.

The two were victorious on the first day of the Wakaiouiti meeting in February and their wins were special for many reasons.

None more than the fact that Canstar (4yo Bettor’s Delight) and Duastar (3yo Art Major) were both bred from a mare that Rose and his racing partner John Howe had some success with on the track.

The pair are the first and second foals from Starlet Lavra, a five-win Jereme’s Jet mare who is out of the In The Pocket mare, Florentine Star.

Regular readers may be thinking, ‘this Star breed rings a bell’?

“Starlet Lavra was a tremendous race mare and she comes out of the Queen’s Treasure maternal line, which is full of good horses through its various branches,” he quipped.

Last week we heard about the good Open Class horses like Starship and Anvil Star which are close relatives of Canstar and Duastar.

But various taproots tracing back to Queens Treasure (1930) include offspring such as Holmes DG and 1984 NZ Cup winner Camelot amongst a litany of good open class and juvenile horses.

Rose’s involvement in Harness Racing began at the same time a young Canterbury lad was making his way in the training ranks.

“We had raced a lot of horses with Terry Chmiel and were with him when he went out on his own originally,” said Rose.

“We hadn’t had a lot of luck but he was on the lookout for a nice one.

“Mark Jones had said to Terry that he would want to have a look at a horse that was owned 50/50 by Tim Butt and Kypros Kotzikas.

“She was a two-year-old and the funny story about her is that I was at the Motukarara trials and there was a heat being run for emerging two-year-olds.

“There were three of Tim Butt’s and two of Nigel McGrath’s, and I sort of said to myself how do I get myself one of these two-year-olds that can get up and go early like these guys have?

“Well bugger me, Starlet Lavra was one of the horses in that heat. I didn’t ever think that I would be owning one of them,” he said.

Starlet Lavra had shown early promise, but it was her residual value as a broodmare that ultimately saw her sold as Rose and his partner were keen on the breeding side after some unsuccessful attempts a few years prior.

“Anthony Butt said to me she was from a good family, so I went to Danny Boyle at Nevele R Stud who helped me research the family.

Although Starlet Lavra had the speed to make a two-year-old, Chmiel advised his clients against pushing on and instead the camp opted for the patient route.

“She could have won a race as a two-year-old but we thought being a big filly we would give her time, so I took her home and looked after her and waited until her three-year-old season,” he said.

Rose and Howe didn’t have to wait long for their patience to be rewarded with Starlet Lavra who won her race debut at Addington comfortably in the hands of Glenys Chmiel.

After some mixed performances being thrust up in grade at a time when fillies and mares opportunities were scarce, it would be six months before she recaptured her best form.

After stringing a couple of placings together in the Winter of 2013, she found her way to the winner’s circle on a balmy Thursday night at Forbury Park.

She lined up on Cup Day the followings season as the winner of five races from 16 starts, having won her fourth and fifth races in succession.

Her fourth win was very impressive, looping the field five wide and coming from last on the turn which with the lack of camber on the Rangiora track is no mean feat.

She set a track record that day for mares over 2000m from a stand, stopping the clock in 2:31.1. That record still stands today.

Just as it looked like Starlet Lavra was fulfilling her early promise, the wheels fell off through no fault of her own.

“We lined up on Cup Day thinking there was only one horse to beat and that was Arden Rooney, but as he could earlier in his career, he galloped off the mobile arm and was out of the race.

“We were sitting midfield with cover thinking we were a big show, but when Terry hooked her out to sprint, she was going backwards and he didn’t know what the hell had happened.

“Blair had driven her at the Cup Trials and had come back and said to me jokingly that he should drive this horse because she was too good for Terry. She was no Adore Me but she beat her in a trial as a three-year-old,” he said.

“What it turned out was that somewhere along the line she had been injected and they had hit a nerve in her neck. It was inhibiting her breathing subsequently and we thought that rather than operate, we would breed from her.

“If we got one as good as her we would be happy, and if we got something better we would have something really good,” said Rose.

Starlet Lavra was on the bigger side for most mares and it was with her size in mind that Rose and Howe sent her to Bettor’s Delight, thinking the Sire’s penchant for throwing the odd smaller foal would be the equilibrium needed for a recipe of success.

Mother nature likes to make a fool of us as breeders and as it turned out, the mating would produce a filly who was rather large.

“Canstar was a big scopey horse like her mother, Dan Cummings had told me that that side of the breed were big horses, and we had gone to Bettor’s thinking we would get a smaller foal,” said Rose.

Like any decent breeder, Rose took a glass half full approach

“She was a big horse, but so was Brent Mangos’ good filly Bettor Cover Lover.”

Canstar took a little time to find her feet as a racehorse despite having a bit of breeding on her side.

The daughter of Bettor’s Delight was well travelled racing at 10 different venues before securing her first win at her 11th start.

Rose was quick to point out she had no favours with barrier draws for much of her early career, but running 5th in an Alabar Fillies Heat behind Wainui Creek showed she was no slouch.

“The draws came out and we had drawn five and we were over the moon. I rang my partner to tell him and we were sort of jumping around because Wainui creek had drawn 8.

“Half an hour later they re-drew the fields and we had drawn 8 and Wainui Creek had moved into the pole,” he laughed.

By now the racing partnership of Rose and Howe had a second foal from Starlet Lavra and despite being cut from a different cloth physically, the Art Major filly was showing some of the family traits of early speed.

“Duastar looks like a typical Art Major, they are totally different horses to look at but she too could have been a two-year-old,” said Rose.

The virtue of patience was once again applied to see the now three-year-old presented at the races on the back of some good trial form, having won a Workout at Methven leading to her debut at Rangiora.

The filly failed to fire a shot and after some questions from the stipes, was found to be suffering from the effects of a virus.

Back to the drawing board they went.

After a couple of nice trials and workouts, she went even worse at Methven. Interestingly the stipes left her alone this time?!

Looking for answers it was decided a different approach might be good for the Rose and Howe owned duo, and the pair were sent to Woodend and placed in the care of Regan Todd.

Duastar must have shown a bit on the beach because despite having run 10th at her first two starts, she opened a warm third favourite in the third race at Wakaiouiti.

Robbie Close had her in the running line for most of the trip and when presented, showed some real dash to reel in the favourite Krystal Delight, who had led everywhere but the finish.

“The funny thing was they were horses who we didn’t think had much of a sprint, but for whatever reason Regan didn’t agree with our assessment and so it’s proven,” said Rose.

Canstar completed a wonderful day for Rose when she won the eighth race on the card.

Todd insists that he never worked any oracles so to speak and that the pair were nice horses and probably just down on their luck a bit.

“I didn’t have to do anything too drastic mate, wee Duastar had always shown promise early on for Terry but got crook a couple of times and Canstar was in the same boat, she seems nice enough and I would like to think they will be better for it next time in,” said Todd.

Both horses have franked their form and gone on with it.

Canstar bolted in at her next start at Addington after being no better than midfield and showing great zip to win going away before running second in an extremely deep fillies and mares race in her final start for the season.

The younger sister Duastar has proven no slouch either running fourth in a strong Nevele R Fillies heat behind Stylish Memphis and then being beaten a nose by the seven-win Doctor Tim at Waimate.

Both suggest they will make Rose proud next season and he has a He’s Watching yearling and Vincent weanling out of Starlet Lavra waiting in the wings.

Both are colts and the yearling is showing some promise with Regan Todd.

“The He’s Watching colt is a big rangy horse like his mum and I haven’t been out to see the Vincent colt for a while but he was a nice foal like a lot of the Vincent’s,” he said.

It’s always great to see the nice guys having a bit of luck and for a student of the game like Rose, his passion for breeding is now beginning to reap its rewards.

“I go over all the test matings and to finally have what you think come true, you feel validated,” said Rose.