Group Three performer She’s Allthe Craze is destined for the broodmare paddock later this year, however, she showed at Addington Raceway on Sunday that her winning days are not over just yet. 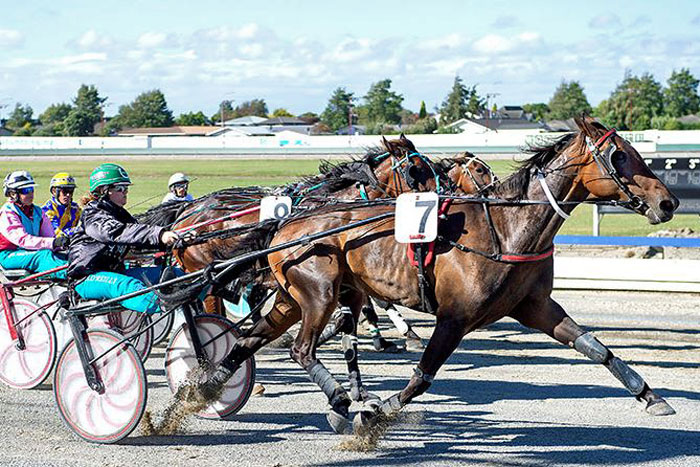 From her wide draw she was taken back to settle at the rear of the field for regular driver Jessica Young-Grant, who sat patiently behind the mare throughout.

She asked She’s Allthe Craze to improve three-wide with 400m to go and the daughter of Crazed duly obliged, gathering in her opposition and running away to a 1-1/4 length victory over Bright Glow.

It was the third run in a week for She’s Allthe Craze and the victory came as a pleasant surprise for Negus, who also shares in her ownership.

“That was her third race in a week. We really only put her in to make sure that they got a field,” he said.

“I thought she was only going there to run a placing, but Kahress was late scratched, and she got a really good run. I was quite pleased in the end the way it turned out.

She’s Allthe Craze has been in consistent form this preparation and Negus highlighted Young-Grant’s great association with the mare as a contributing factor.

“She has been really well driven by Jessica for quite some time,” Negus said. “She looks after her and she runs on really well.

“She has to be driven a little bit quietly otherwise she runs out of puff and she isn’t that strong.

“But when she gets the luck, like she did today, she is good enough.”

Negus has been pleased with the way his mare has performed throughout her career, but admitted she may have visited the winner’s circle for the last time.

“She has done a terrific job and she is so honest, she trots all the way,” he said.

“One of her wins was a penalty free junior drivers race at Palmerston North, so we have travelled her a bit, she has been to Auckland and finished second in a Group Three race.

“She has got a bit better as she has gotten older but there won’t be many races left in her I wouldn’t think because when she gets to that next path up it is just a bit tough for her.”

Negus is now looking forward to breeding from the daughter of Group One winner Kylie Ree and is weighing up between two stallions at the moment.

“She will be going to stud this coming season regardless of what happens,” Negus said. “She will go to either Marcoola or Majestic Son.

“With Marcoola it would be just to get a bit of Sundon in the family as there is none in there at the moment.”