Rotorua breeder Tony Armstrong’s horses have been winning all over the world and Brookies Jaffa (Auckland Reactor-Brookmaker-Artiscape) added another victory to his tally when scoring at Cambridge last week. 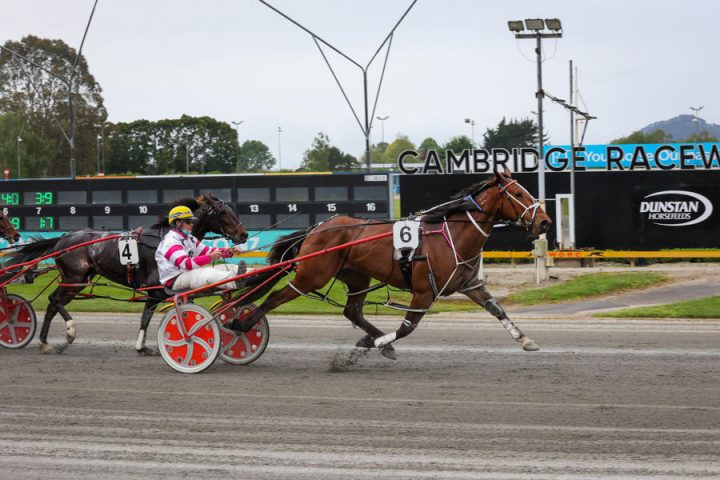 Brookies Jaffa scores at Cambridge over the long weekend in the hands of David Butcher.

The Jason and Megan Teaz trained pacer capped a fine run of form when launched out of the one-one by driver David Butcher to score career win number six.

Brookies Jaffa has been a durable performer and continual improver through his consistent form racing in all but one of the last 12 months.

Armstrong, who bred the five-year-old and races him with a large group of the Teaz stable’s clients, rated last week’s victory as the pacer’s best yet.

“That was his best win I reckon, he hit the line pretty good. I was quite surprised actually,” the breeder-owner said.  “His last few races have all been 55sec last halves (800m). This time he was well-driven and in the right spot and it was a good win.”

Brookies Jaffa’s dam, Artiscape mare Brookmaker won’t return to the breeding barn with Armstrong preferring to give her a well-earned retirement at 20-years-old.

“She had all colts and her last foal was a filly by Shadow Play, so I kept her,” Armstrong said.

But the Rotorua breeder-owner won’t be short of horses to go on with. Among his broodmare band is Courage Under Fire mare Pomis Princess, the dam of former Aussie speed machine Arms Of An Angel.

“I have got a really nice Always B Miki filly out of her and she is going to Lazarus.”

Armstrong will also send Pukpuk Princess to Always B Miki this season. The Grinfromeartoear mare is compiling a great record at stud with Hezacrocwatcher winning three of his first five starts in Australia and She’s Pukka going 1.51 and earning more than $US300,000 in North America.

Armstrong will breed one more mare this year in Armed Angel, a Mach Three half-sister to Pomis Princess booked to Vincent.

The breeder-owner has formed a strong combination with the Jason and Megan Teaz stable. The Teaz develop the majority of Armstrong’s stock and set up his overseas performers for good careers with their early management.

“They are good trainers, they just need to get some really good horses,” Armstrong said.  They don’t get the big-spending guys from the sales, but they have got a good record, I reckon. They look after their horses really well.”

With Brookies Jaffa continuing to front up and deliver, the combination is set for more success at short notice.