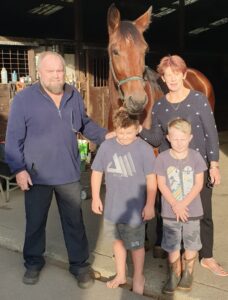 Ival and Lorraine Brownlee with grandkids

Pokeno breeders, Ival and Lorraine Brownlee, and son Ival (Jnr) have bred their first winner from the first foal out of their Sundon mare, Kiss Me Sunny.

Brienne (Majestic Son) notched up her first win in seven starts last Thursday (May 5), when she won the National Style Stakes at Alexandra Park by a length.

She is owned by Lorraine and the two Ivals, who also bred her.

As was the case back then Ival (Jr) again did the training and Jay Abernethy the driving.

“She’s a nice filly who has improved with each race. Her mother (Kiss Me Sunny) had white feet and feet problems – and only had one start (11th) at Alexandra Park in 2015. A year later we put her to Majestic Son, and Brienne is the result.

“We’ve always loved the foals Majestic Son has produced. He’s such a compatible sire to all mares. He produces nice racehorses and that’s all any breeder could ever want,” Brownlee Senior said.

Both Ival and Lorraine thought Brienne could win after returning some encouraging performances in her previous six outings.

“I thought she could have won three starts back and has returned some encouraging performances since. She’s a lovely filly and I think she can go on with it,” Brownlee said.

Brienne has a full brother, an un-named yearling colt.

“He’s a lovely looking boy as well. We left the mare empty this season but are very tempted to go back to Majestic Son again next season. We just love that sire so much,” Lorraine added.

“We had Cheese And Kisses in our stable and she had her first start with us. We raced her for owner, Bill McMiken, who came down most days and drove her in trackwork. She was a lovely mare who won seven races. She also left us Kissme Earl (by Earl) who won three races ($28,792).

“The only other mare we are breeding from is Roxie Heart (Sundon – Regal Tina). She won four races ($30,456) and has left us three foals, after having no return to What The Hill in 2020.”

Ival Brownlee Jr works a team of six to eight at Pokeno. The proud parents also paid a tribute to him.

“He works his guts out so his mother and I can race horses. He works seven days a week and that’s huge considering he has a partner and young family. He’s done this for years. We are very proud of Ival and his work ethic,” Brownlee (72) said.

For the record Ival Brownlee Senior is an advanced amateur driver, who has reined two winners (both in 2013).

“We love the game and I enjoy driving so much. I actually had a drive the night Brienne won. Ival (Jr) also drives but has taken a back seat for now, allowing Jay to take the seat.

“That’s not taking anything away from Ival, but we love the way Jay drives. No doubt Ival will make a return to the sulky but for now he prefers to train and let the professionals do the steering. He’s also a proud and busy Dad,” Brownlee said.

Brownlee insisted the family were only small-time breeders, but in a short time we have learnt that that if you are going to do it, you must do it right. There’s no use trying to pull foals out of a mare like we do with our cattle and sheep.

“It’s a very specialised industry and even though I’ve been training and driving horses for a few decades now breeding has been something a little bit foreign to me. It’s not that we haven’t tried, as we had our first go in 1982, and have had a little bit of success over the years.”

He said it was his wife Lorraine, who had always been into breeding.

“I wouldn’t have probably got into it if it wasn’t for Lorraine. She hails from a harness racing background. Her Dad, Fred Smith, trained and drove horses and so did her brother Gary and her uncles.

“It’s a very specialised industry – and it’s not cheap. Man, do those horses eat! Lorraine was breeding horses when her adult children were still at school.

“I have learnt one thing about breeding though. If you are going to do it, then you must do it right. You have to be professional from day one,” said Brownlee Senior, who has owned his own drainage and plumbing business for 47 years.