Skip to content
Burrows does it all with grey mare 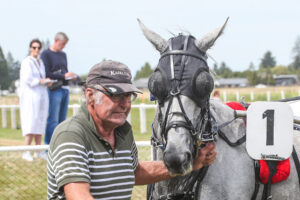 Burrows does it all with grey mare

If you want a job done properly, do it yourself.

Breeder-owner-trainer Don Burrows did just that when he hopped in the sulky behind Silverlinings (Majestic Son-Tuinfro-Sundon) and did what several leading drivers couldn’t do before him – steer the mare to a prefect trotting victory at Oamaru.

Burrows even got some good-natured ribbing from his mare’s previous reinsman after his win.

“John Dunn said to me at the trials today you showed me up you old bugger.”

Silverlinings looked in the zone at Oamaru with Burrows keeping the mare in a happy space to let her show her best.

“That is the way you have got to catch her, Ben Hope had her sussed when he was driving her.”

“He qualified her and did everything with her but he got a holiday.”

“I tried to find some other drivers but they couldn’t cotton on with her so I thought I would have a go myself.”

The strong nature of the mare’s win suggests more is in store and Burrows agrees.

“I feel if she does that all the time there is a few in her.”

“She has got the speed, when she did get cracking she got to the front in no time.”

Burrows races Silverlinings with wife Peggy as well as northern based brothers Stephen and Michael Bavin.

The group have plenty of young stock coming through.

“We breed every second year otherwise you get too many around you.”

“I have got about seven to work on now.”

“We have got the two mares, Tuinfro has a foal at foot by Superfast Stuart who is a magnificent looking animal.”

“I have also got her half-sister by Continentalman, Espresso Shot.”

“She also has a filly at foot by Superfast Stuart, as well.”

“I have got two two-year-olds out of the two mares by Superfast Stuart – a colt and a filly.”

“I am just breaking them in now.”

Tuinfro and Espresso Shot are both daughters of In Shot (Chiola Hanover), the former open class mare raced among the group.

“She could trot, the whole family has speed, you have just got to have the attitude right.”

“I don’t worry about the speed because I know they have all got it.”

“I just try to get them right in the head.”

The connection between the Burrows and the Bavins stretches back almost 40 years.

“I met the two brothers in 1985, they bought the great grandmother of Silverlinings around to be served by one of the stallions Quality Farms was standing at the time.”

“That is when I got to know the two boys.”

“She was Blue Pine, she was by Blue Prince and she was out of a full sister to Chequer Board (23 wins).

“They have just hung in there as owners with the same family right through.”