Skip to content
Call Me Trouble, no, Call Me Winner

Call Me Trouble, no, Call Me Winner

Call Me Trouble (Superfast Stuart – Sun Trapped) has gradually become one of the best trotters Mike and Diane Heenan have bred, but they will always remember him as the horse that gave one young horseman the best possible launchpad and education into harness racing. 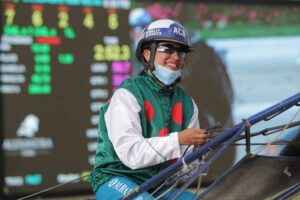 Thornley ‘cut his teeth’ with Call Me Trouble, thanks to the generosity of the Heenans, who own ‘Trouble Lodge’ in Rakaia.

“We saw how much of a hard worker he was when Robin Thornley trained him for us, so we asked young Sam if he wanted a short-term lease with right to buy the horse.

“We gave the lease to him because he was always voluntarily giving us a hand at the races and we wanted to do something that might help him.

“He was over the moon. He went back and asked his parents, then rang me late one night very excited.

“Sam did a wonderful job with the trotter. He cut his teeth on that horse. Robin won two races with him and Sam was driving him well.

“Then Sam got a nice offer from Australia, and then another one from Auckland, He asked me what he should do, and I said to him that he had learnt a lot from the horse and with the sale he could invest more in his future with other stock, etcetera,” Heenan said.

“He is such a likeable kid. Very hard-working and dedicated. Diane and I are so pleased to see both him and the horse develop.

“We really enjoyed watching the trotter win again on Friday,” he added.

Call Me Trouble had his 46th career start and 30th for new owner Lynette Philpott and his Pukekohe trainer, Zac, in the feature trot at Alexandra Park last Friday evening.

He not only won from 35m behind, but he also provided 26-year-old Puni-based junior driver, Monika Ranger (daughter), with her first career win in seven race-day starts. Monika secured two more wins at Cambridge on Wednesday Night.

“It’s so good to see the younger ones getting recognition. I’m so pleased for Sam and Monika. Zac knew what he was doing putting her behind the horse. They are workmates so she would have known the horse well. It was also a penalty free win so I’m pleased for Lynette as well,” Heenan said.

“I intentionally bred Sun Trapped to Sundon because to me he is the greatest sire that ever lived, better than Bettor’s Delight. No stallion topped the sires list continually for years like he did.

“We bought Sun Trapped at a yearling sale only because she was by Sundon and out of Sundon’s maternal family.

“I thought the breeding back into the same family would result in her being a good broodmare prospect,” Heenan said.

He said he worked Sun Trapped up as a 2-year-old but she had circulation problems in her feet and never raced.

“I thought she might leave a good one – and she did. Sadly, she’s all done as a broodmare and we are not breeding on from her daughters.”

Call Me Trouble is not the best totter the Heenans bred, but he’s close to it.

“We are largely sellers, and I always try and watch the horses we have bred race. It was such a thrill to see him win again, especially at Alexandra Park, and especially for Monika,” Heenan said.

His wife Diane said she had been involved in harness racing almost all of her life.

“My father (Muir Thompson, Ashburton) used to race horses and the first broodmare he had was a (1949) pacer named Trouble (Congo Song – Blue Revue).

“She left a couple that went to Cup class and that’s where the name ‘Trouble’ came from,” the Mid Canterbury horsewoman added.

The Heenans stand Superfast Stuart at their Mid Canterbury establishment. Mike is also a quality trainer and driver with 79 training victories ($762,936) since 1985. He’s also saluted the judge on 67 occasions (446,569) since first getting in the sulky in 1980.

They have 12 racehorses and the same number of broodmares on their Rakaia farm.