Captain Crunch and Marcoola new kids on the block at Nevele R Stud:

To compliment the emerging talents of Always B Miki, Creatine, Father Patrick and Vincent

Nevele R Stud has been through a relatively quiet period during the past decade, or since the days when Falcon Seelster’s siring career was winding down.

A Rocknroll Dance did some big books for a while, as has Father Patrick via frozen semen in recent seasons, but the times in the 90s when the likes of Falcon Seelster, Holmes Hanover, Live Or Die and Soky’s Atom were covering a significant percentage of the pacing broodmares in the country are but a distant memory now.

For many years, the Prebbleton farm was accounting for around one third of the broodmare population in New Zealand, plus big numbers in Australia as well.

Nevele R could be said to be making a bit of a comeback however, in many respects due to joining forces with Alabar, and this year is looking like the start of a new era with a lot of potential on the horizon. 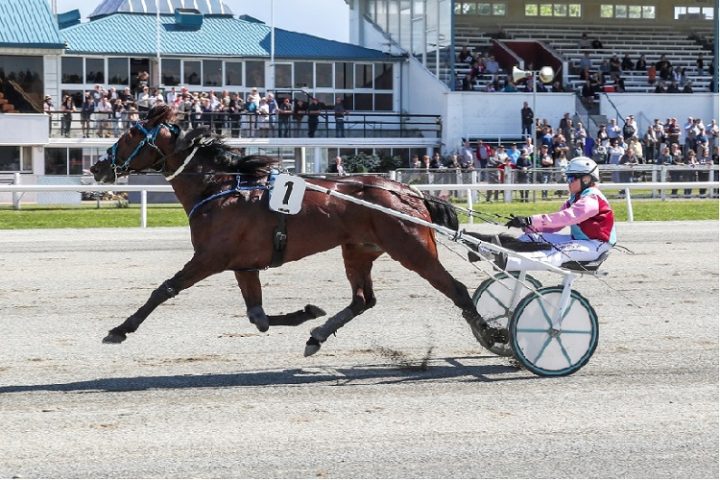 The exciting Captain Crunch has arrived at the stud along with Creatine after missing last season due to an injury, while Marcoola is also embarking on a new career.

Always B Miki and Vincent, like Captain Crunch and the now Australian based A Rocknroll Dance, owned or imported with Alabar, have two-year-old and yearling crops coming on stream respectively.

Ultimate Machete is also owned in partnership and is standing his second season at Alabar in Auckland, while another son of Bettor’s Delight in Gold Ace completes the line up of sires resident at Prebbleton.

Captain Crunch has been rushed by breeders, which was not surprising given his pedigree, performance and price.

“He was booked full within 24 hours in Australia and we had to start forming a waiting list after two weeks here,” said Nevele R’s manager Ged Mooar.

“The response was quite overwhelming – I certainly haven’t seen anything like it before.”

Captain Crunch’s sire Captaintreacherous has been a sensation at stud with his initial crops and with a limited supply of frozen semen available here, he was booked full long ago.

He stands for $30,000 at Hanover in America and was booked full this year.

Captain Crunch is the fastest and richest son of Captaintreacherous and is being introduced at $6500.

Captaintreacherous was the leading sire of two and three-year-olds in North America last year with his first two crops, while from a first crop of 22 foals in New Zealand, he has already produced It’s All About Faith and other two-year-old winners in Captain Nemo, Chablis, Hot And Treacherous and Platinum Stride.

Like Captaintreacherous, Captain Crunch is a big horse at 16.1 hands and is an ideal match for all those Bettor’s Delight and Art Major mares out there.

Marcoola is also heading for a good book on debut, which is hardly surprising given he is a son of the freak trotting sire Sundon and is great value at $2500.

He won the New Zealand and Northern Trotting Derby double during a sequence of seven straight wins at three, and remarkably, his dam, grandam (Amaretto Sun) and great grandam (Lyell Creek) all produced the winners of the Dominion Handicap, or trotting’s New Zealand Cup.

Marcoola will be at a slight disadvantage in that he cannot be bred to Sundon mares like his competitors over the years, but then again Sundon has been pushed back in the pedigrees of most mares nowadays.

A mare by say Love You from a Sundon mare will be fine for Marcoola as the cross results in a 2×4 reverse sex to Sundon.

Trotting sires in the flesh and standing at relatively cheap stud fees are rather thin on the ground these days, with Royal Aspirations another example and showing encouraging signs.

The same could be said of Creatine, the son of Andover Hall who covered books of 70 and 49 mares in his first two seasons here at $4000.

The winner of a Breeders Crown and the Kentucky Futurity along with a heat of the Hambletonian at three, Creatine was also a top performer at four and five when he won another Breeders Crown and Group 1 races in Europe, earning over $2m in his career.

Creatine’s dam is line-bred 2×3 to Valley Victory while having three further crosses to Speedy Crown within four generations.

He has a crop of two-year-olds coming on stream here this season, or next year.

So too does Always B Miki after a first season at stud in America which has resulted in a current crop of two-year-olds there.

The unbeaten Perfect Sting is from a mare by Bettor’s Delight and became the first sub-1.50 juvenile in North America this season at The Red Mile in late August.

Always B Miki covered books in the 90s in his first two seasons at stud here, but jumped to 168 in his third last season.

“He’s closed in Australia as things stand at the moment and will do another big book here,” said Mooar.

Vincent’s first crop are yearlings and after making a big impression as weanlings at the Mixed Sale earlier this year, he can be expected to be to the fore at the sales next year.

“I’m not sure I’ve seen a better or more uniform bunch of foals by a sire than Vincent’s first crop,” said Mooar.

“Vincent is really stamping his foals and things are looking really positive for him.”

An impressive type by Art Major from a multiple Group 1 winning filly in Kept For Pleasure, Vincent has been accorded every chance at stud with books of 148 and 110 mares in New Zealand and not much is about to change this season.

Again he is a great option for mares by Bettor’s Delight and also great value at $4500.

Like Captaintreacherous, Father Patrick is the latest fashion amongst the trotting sires, having gone to a stud fee of $30,000 at Diamond Creek Farm in Pennsylvania this year.

He also had his first two crops racing in America last year and they won around $6m, with his two-year-olds earnings $3.4m to place second only to Muscle Hill.

Father Patrick’s yearlings averaged over $100,000 in America last year and included a record breaking colt at $1.1m, while a colt by him sold for $65,000 at this year’s trotting sale in Christchurch.

Last season from a crop of 28 two-year-olds here, Father Patrick was represented by winners in the colt Have No Fear and filly La Reina Del Sur.

The son of Cantab Hall has a first crop of 10 foals in Australia with six already starters and two filly winners.

Andover Hall and Muscle Mass are well established trotting sires with the latter shuttling for one season here where he produced a crop of 53 foals now aged seven.

But it is the new kids on the block, Captain Crunch and Marcoola, along with the emerging talents of Always B Miki, Creatine, Father Patrick and Vincent, who will be very much the focus at Nevele R this season.