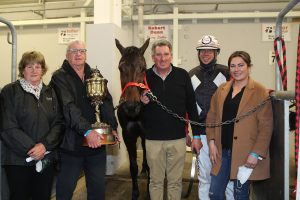 For a trotter that wasn’t even supposed to be bred, Sundees Son is doing exceptional things.

The countdown is on as the defending champion heads to Addington this afternoon to defend his Group One Dominion Trot crown on Show Day for breeder-owners Colin and Nancy Hair.

The Hairs have been taken on an incredible ride by their star trotter, who is coming off a season of dominating New Zealand’s open class trotting features like few before him have been able to. It is made even more extraordinary by the fact that it may never have happened at all. Sundees Son’s dam Stardon was never booked to leading trotting sire Majestic Son in the 2013-14 breeding season.

But misfortune at the time led to the birth of a trotting superstar.

“That season I bred a full sister to Stardon – Lara Lass – to Majestic Son, Stardon wasn’t even going to be bred that year,” Colin Hair said. “But Lara Lass had twins, so they plucked one out and then she rejected the one that was left.  After that, she got an infection, so I ended up swapping them over and Stardon was served by Majestic Son.”

The last-minute decision to breed Stardon also explains why Sundees Son was a late foal, born on December 12th, 2014.

The only thing the Hairs have had to wait on with their Group One star since then is the development of his trotting gait. Sundees Son has been both fast and powerful from the moment he hit the racetrack. But his manners have not always allowed him to show his true potential, until now.

The six-year-old heads into his Dominion defence on the back of a perfect preparation in which he hasn’t put a foot wrong. But that doesn’t mean the Hairs can go into Friday’s race totally relaxed.

“With him, it is difficult not to get nervous just with his history as a two-year-old, three-year-old and four-year-old,” Hair said. With him, you do sort of realise that he is an athlete with a mind of his own, he is not a machine.  He is looking good and settled at the moment though, a lot of that is around keeping him happy.  The attention he gets from Craig Edmonds has a lot to do with that.”

Sundees Son has set himself a hard act to follow after his massive win in the Dominion last year. The Robert and Jenna Dunn trained star sat parked for much of the event before powering away from his rivals to win in race record time.

Colin Hair admitted the thrill from breeding and racing a winner of New Zealand’s most sought-after trotting trophy was everything that it was expected to be.

“It was a huge thrill and a satisfaction I suppose you could say. It was a relief as well, after all the trials and tribulations it all came together on the day.”

“Being out of Stardon the first horse I ever raced, that has always made it very special, too.”

In something of a mirroring of his breeding, Stardon isn’t sticking to the script in this year’s breeding season. The Sundon mare was supposed to go to stud this year and come out of retirement to produce one last foal. But she had other ideas.

“She hasn’t had a foal for a couple of years and she came through the winter looking really spritely.  Nancy and I thought we would breed her again. But she has always been somewhat cranky, like I think a lot of these good breeding mares often are.”

“I couldn’t catch her in the paddock, so I drove her into the boxes to put a halter on her to see how she was and I couldn’t get anywhere near her. I decided that she was perhaps trying to tell me something.”

“She has proven everything, she has done everything for us and we have a full sister to Sundees Son so we just left it.”

Stardon has also left a full brother to Sundees Son in the four-year-old, Temenund. The trotter hasn’t been about to show his potential at the race yet, but there is hope after two recent trial wins for trainer Ross Houghton in the past month that he soon can.

With Stardon retired it is up to her unraced daughter Mailia, by The Pres, to carry on her line this season.

“I have sent a half-sister to Mailia to Majestic Son and she is meant to be served today.”

The Hairs have the honour of lining up two horses they have bred in the Dominion on Friday. Woodstone will also step out in the 3200m feature for trainers Robert and Jenna Dunn. The trotter is capable of featuring if he brings his best form, but goes into the race on the back of two runs.

Woodstone’s dam Gemstone is also at the forefront of the Hair’s breeding plans this year. She will be severed by new Alabar stallion, Elite Stride.

The Hairs also go into Cup Week in good form of their own. Gemstone left another winner last week when Majestical, a three-year-old son of Gemstone won on debut at Rangiora last week.