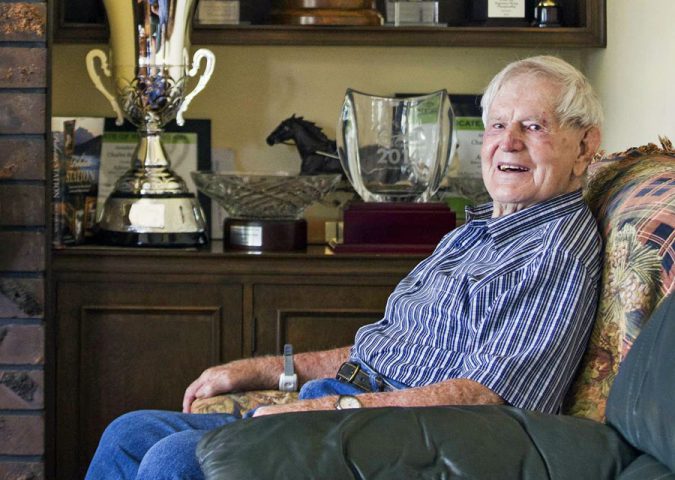 The mark of a great person like Charles Roberts is felt in the legacy he leaves behind.

He did that on several fronts through his pioneering work as an equine veterinarian, his roles in both equine racing codes as an administrator and breeder and finally his efforts as the co-founder of Woodlands Stud.

We know a lot about his achievements and accolades particular to the breeding and racing of horses, but what flew under the radar to many participants was just how talented he was as in his discipline as a vet.

Roberts was an expert when it came to equine reproduction.

Someone who was close to him in many of his pursuits was Woodlands Stud co-founder Andrew Grierson.

When it came to work ethic, Charles had few peers.

“He believed there was never an easy way to make money except by working hard.

“His family owned part of Pakuranga and he worked that hard as a farmer he turned a small fortune into a huge fortune,” said Grierson.

It followed him into his lifelong passion of veterinary work. “He was a leader in his field in his time without a doubt,” said Grierson.

“Mares don’t understand it’s a weekend and Charlie knew that and never backed away from it. He was always available for anyone who rang him any day to come out and check on horses and was very conscientious and diligent as a stud veterinarian and got good results as part of that,” he said.

Charles was a pioneer in establishing some of the technology that is commonplace in today’s equine veterinary work.

An example of this was his enormous outlay on one of the first three mare scanners to ever be produced.

“Charlie helped me to get into a referral practice in Kildare, Ireland,” said Grierson.

“The principal there was a guy called Stan Cosgrove who was a legend also, similar age to Charlie and unfortunately he passed away recently. He was the only Irishman to become the president of the British Veterinary Association,” he said.

“Between Charlie and Stan, they arranged to buy one of the only three scanners originally produced. I believe the cost of each unit was around $20,000 and you could buy a brand new Ford Fairmont for about $2,500 and a house in Papakura for about $20,000 at the time.

As with a lot of technology, earlier models were not as practical as the equipment on hand today. “It was hard to get inside the mare because it would have been half the size of a coke bottle,” laughed Grierson.

Despite not being as fit for purpose as today’s models, the foresight in outlaying a considerable amount of money is not lost on Grierson who said at the time, many assumed the technology to be simply a fad that would pass with time.

“In actual fact it is probably the single most important tool inside your car besides a stethoscope. And we are not only doing pregnancies now, but areas like tendons to abdomens and everything in between,” he said.

Another area in which Charles was ahead of his time was his ability to not only palpate mares, but identifying twins in their infancy long before the scanners were even around.

“Charles always use to down play his intelligence and say there are a lot more intelligent people then me around, but to give you an idea of how clever he was, he was the pioneer of palpating mares and crushing twins,” said Grierson.

“I presented a paper for him way back in 1981 at the World Equine Reproduction Conference and it was based off the idea that if you crushed twins closer to 20 days rather than 30 days, more of them survive.

“Everyone rubbished this claim and said he was making it up saying you couldn’t feel if a mare was pregnant at only 20 days!

“The answer to that is some people can and some people can’t, and Charlie quite clearly could and others who could recognised this and said he was right on the money.

“Of course when scanners came out it did a lot of this work for you, but Charlie’s work and records had been done and kept well in advance of this,” said Grierson.

One of his more controversial discoveries was the use of kerosene in what is termed ‘dousing’ mares.

Because of the flammable nature of the liquid, it drew the ire of those who did not understand its many applications and uses in not only cleaning up animals, but humans also.

“Back in the early days before ‘Prostaglandin’ was in place you couldn’t get a mare or a cow to come into season when you wanted too.

“Charles had observed talking to different dairy farmers over the years that they use the technique of running a bit of kerosene over the vagina of cows and that would stimulate them to come into season.

“Charlie was playing around with that and that was initially what the kerosene was for. What he noticed was that when he went to irrigate them to come in to season, a lot of them had faeces and crud in their uterus’ which was holding them back from breeding.

“What he also saw was that some of those mares seemed to clean up after the process. He then found a lot of mares that would not get into foal or into season properly, started to get into foal once flushed out with kerosene,” said Grierson.

“We use it differently now from how we initially used it back in the 80’s. Now we use it as part of a cleaning process because what the research has shown is that when you irrigate a mare with kerosene, the lining of the uterus has got a whole lot of glandular components. A lot of bacteria gets in and can be hard to treat, but the kerosene opens the glands up and allows them to be expressed and be got at with antibiotics.

The flammable and irritant nature of kerosene overshadowed its healing purposes backed up by science. Kerosene was being used to clean human eyes that had come into contact with industrial chemicals.

Knowing the healing nature of the liquid, Charles would perform a party trick that would stun many of the liquid’s doubters into silence. “When people would say that is horrible for a mare, Charlie would ask them if they had any kerosene lying around,” said Grierson. Charles would then pour some into his eye and say, ‘see, I told you it was fine’, he laughed.

Another topic on which Charles name is discussed and credited for is the commercialisation of the human script drug, Proban.

As the legend goes, Charles was at the races talking to one of the duty doctors about problem mares when the doctor recommended talking to a friend who had a human drug that could be useful in horses.

The drug was Proban and came in tablet form. “Charlie was mixing them up with saline and injecting horses and it turned out to be working great, and then he told a guy in Australia and he started telling Australians about it and suddenly people were using it all over the place.

It was then commercialised as Proban B but back in those days came into existence through word of mouth,” said Grierson.

On a slightly less serious note, Grierson also fondly remembers one of the nicknames Charlie picked up among the local farriers and how it came to stick.

“One of his nicknames back in the day was they use to call him ‘chainsaw’ Charlie.

“Horses back in the day would go from racing on steels during the week, and then if they were racing on the weekend would then have to be plated in aluminium’s.

“Farriers would be in there day plating them and at night taking them off. “If there was ever a horse with a fester in its foot, Charlie believed you needed to get in there and cut a decent V in it to get decent drainage.

“Much of the chagrin of the local farriers many of  them were lamenting the fact of having to shoe a horse after Charlie had treated a stone bruise, and that’s how he got that nickname,” laughed Grierson.

Roberts, who was inducted into the Hall Of Fame, was a regular winner at the annual Harness Racing Awards and in 2013 won five trophies including Owner and Breeder of the Year, as well as awards for his champion stallion Bettor’s Delight and broodmare Scuse Me and top filly Adore Me.

He raced top liners like Miracle Mile winner Christen Me, Adore Me, Dream About Me and Sweet On Me, sharing in the success in later years with daughter Mary and her husband Paul Kenny.

He is the only breeder to be awarded Breeder of the Year in both the Harness and Thoroughbred codes.

However it is his work as a vet that he wanted to be remembered for the most. And so he should!  RIP Charles.