Skip to content
Clark Draft is Ready to Run

Clark Draft is Ready to Run

Timaru horseman Alan Clark has forged a solid pathway for himself out of educating young trotters and selling them as going racehorses.

He has been responsible for the breaking and educating of many talented trotters behind the scenes, but in the last 15 years has also raced some standouts of his own.

In 2006 he let rip with the talented juvenile, Constar. She set a New Zealand record as the fastest 2YO trotting filly recorded over 2400m.

There have not been many meet the starter over that distance as a two-year-old, but do not let that detract from the performance.

While the 2400m distance is predominantly run at Winton or Ashburton, no three-year-old filly had ever gone faster over the trip until Jen Jacka in 2015.

While she won six races at two and ran third in the 2006 Group Two Sires Stakes Trotters Champs, later that year Clark purchased a foal from out of a paddock that would take the self-taught horseman on the ride of a lifetime.

The Fiery Ginga contributed to nearly half of Clark’s 60 training wins (28) and for several years was the iron horse of the trotting ranks, racing 134 times from two through to eight.

While he never won a Group One, he was not far away and his run on Cup Day in 2013 sitting outside Peak encapsulated everything about him. Tough as nails, and when it looked like he was on the canvas, he would find again for Clark.

Finding one as good has been challenging for Clark but with eight broodmares and plenty of sales purchases since, it has not been for a lack of trying.

“With the number Fiona and I are breeding from, it’s important we turn them over with the costs involved – that is why we are offering some in the Mixed Sale,” he said.

The road to the Gavelhouse All Age Sale has been a bit like sitting behind The Ginga as a juvenile for Clark who initially purchased three of his current entries from last year’s All Age Sale at a time when a Ready To Run Sale was still on the cards.

With that concept falling by the wayside, Clark entered them into the Christchurch Mixed Sale which was cancelled due to a lack of numbers.

“I then arranged to have all five of my draft shipped to Auckland at quite an expense,” he said, only for Covid19 to rear its head and now see Clark and his stock sell from the comfort of his own living room.

With no official Ready to Run platform available to him, Clark is using the online All Age Sale as an opportunity to present a Ready to Run type offering to the public.

“I find that with taking a horse to the trials, the agents are only after the very good ones. At least with a sale of this capacity, there is a market for every horse and that is what I am offering,” he said.

Clark is not shy about working his horses from a young age, but there is a method to the madness, and it is a framework that has afforded Clark a lot of success as a horseman.

“A lot of my horses get a lot of groundwork as weanlings and yearlings, they get a lot of mileage,” he said. “From what I have read, working them when they are young makes their bones denser and ligament attachments stronger. I never have any leg problems with my horses, they never have any bowed tendons or anything like that.

“I’ve got yearlings that are in the sale that have had a lot of background conditioning and I think it’s important to get that education and conditioning into them when they are young so you have something to draw on.

All his offerings can be seen working on the tight 800m track by clicking on the video tab which can be found above the pedigree of each horse on the auction listing. 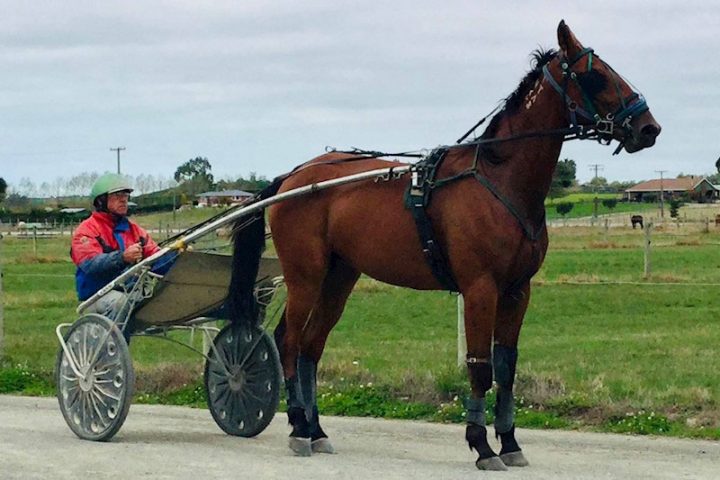 “These are all ready-made racehorses and they are all a delight to drive and to handle,” he said.

Clark has two two-year-olds in the sale. The first is a homebred and has a bit of breeding about him. Lot 133 goes by the name Muscle Power and is a gelded son of Peak out of the Muscles Yankee mare Lady Muscles.

“His dam is a half-sister to The Fiery Ginga and she leaves very good muscled horses.

“I don’t know whether it is the fillies in the family, or the way it worked out, but she was a very aggressive mare when she didn’t get her own way. I decided early on it would be best she was tipped out to be a broodmare.

“The Ginga was a lovely horse and so was his brother Latheronwheel who I educated and sold to clients of Nathan Williamson,” said Clark. “Muscle Power is a nice horse and a very willing horse, he wants to go all the time.”

Being by the European bred Peak, you would imagine this is a trotter that will get better with age and time.

Looking past the fact he has not won a race in his first 12 starts, he is a horse that is highly experienced and will make a nice purchase for someone.

Just because Clark has his horses at the races early does not mean they are always screwed down. The Fiery Ginga did not win a race until his 9th start, he then peeled off seven in a row.

Constar did not win until her fifth start before gobbling up six wins in seven starts.

More recent examples of Clark two-year-old’s with plenty of experience, that have gone on and done a decent job, are Imperial Whiz and Regal Assassin, both foals of 2014. Imperial Whiz could hold the unofficial record for most starts for a two-year-old trotter in a season with 28.

The son of Imperial Count is still going strong picking up two wins at Melton in April to take his career tally to 15 wins and 22 placings from 109 starts with $131,000 in stakes. Not bad for a horse that took 23 starts to clear maidens.

Regal Assassin had not filled a drum in 10 starts before being purchased late in his two-year-old year where he ran second and picked up a win before being sold again to Australian interests. He would run 2nd in the Group 1 Redwood Classic at his second start.

This could bode well for the new owners of Muscle Power. The motor is there, the manners are developing, and now it is a case of it all coming together.

“With the practice and the going to the rials and workouts, he has learnt to step away. I took him to a couple of workouts at Methven against maiden trotters and he stepped away off the unruly and was in front. He also can come off the gate reasonably well.

“He’s not up with the top half-dozen or so two-year-olds but will make a nice horse. With a couple months work, you could have him back at the races and being Sires Stakes eligible, you could possibly get him into the two-year-old race rescheduled for early next season,” he said.

Lot 134 is T K Nihilator who is a son of Bacardi Lindy out of the unraced Monkey Bones mare Eyesagrey. Clark purchased this horse as a yearling from the All Age Sale at Karaka last year.

“He was probably nine months behind my young ones which is why he hasn’t raced as a two-year-old. He is a nice horse and is very willing, but he is trying to go faster than he is capable of at this stage. “I’m sort of just holding on to him and getting him to learn how to trot the bends at this stage,” said Clark.

The first of the yearlings on offer is a blue-blooded filly that was bred by the Clark’s after being given the mother in the twilight of her broodmare career.

“I used to have Paris Metro here and wean the foals and then they get sent off. Some of them I broke in the past including Commander Paris and Musculature Metro.

“They have a Father Patrick up with Michelle Wallis who I believed was the best foal she had left. He just looked like a real athlete which you would expect given how the sire has shown up. I was given the mare after we weaned him,” said Clark.

Clark bred the mare to Wishing Stone and three weeks after the resulting filly was born, Massive Metro emulated his mother by winning the National Trot on New Year’s Eve. I think you call that serendipity?

“She is a really delightful filly with a fantastic gait, if you have a look at the videos at all she sort of flies around the bends and she will definitely make a two-year-old.”

“If she had been a bit bigger at yearling sales time she might have got a good price there, but she has grown over the last four or five months where she is a real nice sized yearling now. I have a good reserve on her, and it won’t bother me if I get her back,” he said.

Another filly in the Clark draft with a pedigree is Sweet Lady Jane. The daughter of Peak is out of a two-win Majestic Son mare whose her third dam was the 1994 Three-Year-Old Trotter of the Year, Inda Bank.

“She is a nice-bodied filly who is like a pet, she will be up over your shoulder and is great in the cart and wants to be there.

Anyone could drive her, but she is a filly I think that needs six months in the cart to get her trotting right. Some horses have a sort of natural instant speed as a youngster. She does not quite have that yet and while she may not race as a two-year-old, she will make a nice three-year-old in my opinion,” he said.

The last of his yearlings is a son of Pegasus Spur out of a lightly-raced half-sister to former Open Class trotter, Musgrove.

“Take Flight is another one I bought up at the Mixed Sale in Auckland last year.

“He is a nice boy who is sort of just average size however and needs to grow a bit more. He is nicely gaited and a very willing wee horse. He does not give me the impression he is going to make a two-year-old. He’s going to take a wee bit longer to get a bit of size about him and develop into it.”

You have to love the refreshing honesty of Clark and he is looking forward to seeing how the sale progresses.

“This online sale has had the greatest exposure of any online sale I have ever come across. The number of people hitting the site has been enormous, particularly for the Wishing Stone filly.

“There is an awareness out there in the industry that has never been generated for any previous online sale, and because of that the prices may be better than we think, particularly for the better bred horses,” he said.