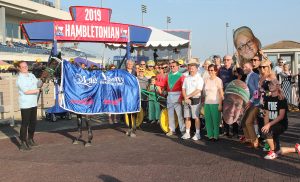 Shartin after winning the Lady Liberty

Christchurch hobby trainer Grant Crabbe has been spending a lot of time in the spotlight as the breeder of Shartin, who is now the fastest pacing filly or mare in history at 1.46.8 and set to surpass $2m in earnings.

Crabbe bred Shartin when he was going foal for foal from the Live Or Die mare Bagdarin with Ashburton’s Bruce Francis and most will quickly associate the maternal line with the latter.

Francis raced Shartin’s fourth dam Bravine some 50 years ago after inheriting the breed from his father George, who had been given the Jacks Potts mare Protégé back in the 1940s by Ces Donald.

George bred a good horse by U Scott from Protégé in Brava (9 wins) and later an unraced sister called Chenault.

“Jack Litten trained for dad and I can remember him saying that while she wasn’t going to make it as a racehorse, that he should never sell her as a broodmare,” recalls Bruce.

“When George passed away in the early 60s, we were sharing the foals from Chenault between myself, my brother Wayne and my sister, and I was lucky enough to get the best of them in Bravine.”

Chenault had been bred to Bachelor Hanover in his first season at stud on the advice of Litten as he was standing nearby in West Melton for Jim Dalgety.

Bravine was a smart filly and won three times as a juvenile, while on three other occasions she was second to Sam Tryax, the top colt that year with eight wins from nine races.

Bravine went on to win eight races and produced the top colts Locarno (18 wins, Messenger, NSW Miracle Mile) and Ostrava (10 wins, 2nd NZ Derby) along with the good mare Agrinion (9 wins) among others, and she was unlucky not to be accorded a broodmare award.

Things have sort of been going steadily downhill since then and today, or on the face of it, Shartin would appear to have come from nowhere.

She is the second foal from Bagdarin, a one-win Live Or Die mare who was one of two minor winners out of seven foals from the Save Fuel mare Slatina.

Six of the latter’s foals were fillies with two of them by Pacific Rocket and P-Forty-Seven, but Slatina still should have done better with two foals by Courage Under Fire, two by Washington VC and one by Live Or Die.

Francis makes no excuses for Slatina although with the foals by Washington VC, one died as a yearling and the other one broke down.

Their dam Kinsale was a qualified Noodlum mare who was a half-sister to eight winners including good sorts in Kanturk, Fredericton, Kajura and the hard-hitting Australian and U.S. performer Kizema (29 wins, $152,000).

Their dam Kiatina (5 wins) was a Fallacy daughter of Bravine and thus a half-sister to Locarno, Ostrava and Agrinion.

Bravine was from a U Scott mare and Kinsale had a particularly good pedigree as well, with Noodlum being by Bachelor Hanover from Deft (Captain Adios), while Fallacy was by Light Brigade from another top maternal line, so there was plenty of good blood and performers further removed in Shartin’s pedigree.

At that point however, or when breeding from the likes of Kinsale from the 80s, Francis was perhaps guilty of supporting stallions he either imported or stood at stud in Ashburton.

“Save Fuel produced some good, tough horses, but they tended to be top heavy and came with soundness issues,” said Bruce.

“Kajura was a very good horse and an example. He won seven races in one year and five in a row for Leo O’Reilly.

“But after I sold him to Queensland and he won his first two starts, including the Lord Mayor’s Cup at Albion Park, he died of colic.”

His Lordship half-brother Kanturk was also a very good three-year-old, winning two G3 races at Addington where he beat Freightman and Roydon Glen.

Kinsale also produced a nice mare to Paulsboro in Kivalina, but most of her foals were fillies by Save Fuel.

A son of Bret Hanover, Save Fuel sired several good colts such as Partial Saving, Camberley Octane, Power To Burn, Bolsena and Savarma, but at no stage did he produce any early speed.

Probably his best filly was Dudinka, who when bred to a speed sire in Christian Cullen in her first two seasons at stud, produced Dudinka’s Star (GN Oaks) and Dudinka’s Cullen, who won the G2 Superstars only to be disqualified.

That is the first hint of things to come here and more to the point, we probably need look no further than Bagdarin and her ‘nicking’ with Tintin In America as an explanation for Shartin.

Bagdarin was clearly a lot better than her one win suggests.

After being sacked by another trainer, Francis gave her to Crabbe on a 50/50 deal and he produced her to win a mile in 1.57.7 on debut as a three-year-old at Ashburton in February of 2011.

Bagdarin had gone back to last from a wide draw and was still wide and spotting the leaders some 10 lengths on the home turn, but she stormed home to win going away in the hands of Colin DeFilippi.

She was then diagnosed with arthritis in the knees however and that was the end of that.

Crabbe had always been greatly impressed by the speed shown by Bagdarin, but being by Live Or Die from a Save Fuel mare on top of that maternal line, we can safely assume she had a good degree of toughness as well.

Bred to a noted speedster in Tintin In America, who won the Sires Stakes 2YO Final over Highview Tommy and Stunin Cullen, out pops Shartin.

Tintin In America was from an In The Pocket mare and came from the ‘Zen’ family, one noted for early speed, while his sire McArdle also possessed high speed.

On one occasion, McArdle was clocked pacing a final quarter at The Meadowlands in 25 seconds, a record at that time.

He fashioned a very respectable record at stud with better than a 50% record for winners to foals, and a very high percentage of colt winners including speedsters such as Aslan, Five Star Anvil, Le Sol and Lusty Mac.

In that respect, McArdle was not your typical son of Falcon Seelster, but he never really made it commercially due to not enough group performers at two and three.

Francis initially bred a colt by Changeover from Bagdarin, but when he proved a mongol-type and “like a retard” in training, he was happy to allow Crabbe to keep her.

Crabbe was doing a bit of work at Nevele R Stud when Tintin In America became available and Shartin belongs to his second crop.

Tintin In America was always up against it stud, because he was not considered commercial enough to stand at a high end stud fee.

As such he didn’t get support from commercial breeders or such mares, and he didn’t get enough numbers on the ground either, with initial crops of 29, 31, 23 and 10 foals

Those are his racing crops in New Zealand and Shartin stands head and shoulders above his performers, although God’s Spirit has been smart in NSW and taken a record of 1.50.9 at Menangle.

Crabbe did not breed another foal from Bagdarin until Shartin started showing promise, but he now has a three-year-old brother called Knockawarwon who is tracking in the exact same way as Shartin.

“He also has a lot of speed and like Shartin I could have taken him to the trials as a two-year-old last season,” said Crabbe.

“But they could easily have been tipped over the edge so I was patient with them.

Crabbe has also bred a yearling colt by A Rocknroll Dance which he describes as “leggy and with long pasterns”, which is a known source of speed.

Bagdarin missed three times to Sweet Lou last season before one late serve by Gold Ace did the trick, and he’s probably going to send her back there this season.

“People keep telling me that I should be sending her to Bettor’s Delight or something, but I don’t think you need those big, flash stud fees when you’re breeding to race, or more to the point to sell.”

Shartin makes that point hard to argue with.