Skip to content
Cool Maiden leaving winners in both gaits

Whether it’s trotters or p 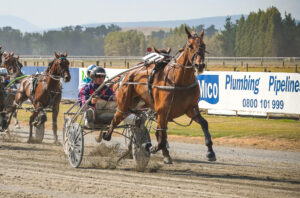 The five-year-old is the eighth foal and sixth winner from Cool Maiden, who has left everything from a Group One placed trotter in Cool Cobber (Pegasus Spur) to a 1.53 pacer in John Of Arc (Courage Under Fire).

Cool Maiden was bred when Baynes sent her dam Cool Yankee to pacing sire Safely Kept during Swain’s tenure training in partnership with him.

And it was done with trotting in mind.

“Colin sent the mare to Safely Kept because La Coocaracha was going so well at the time.”

“The Big Lebowski, we have taken our time with him, we will see how he ends up.”

“If he finishes winning races pacing we will give him a go trotting because he has a lovely way of going when he trots.”

“We will see how that develops down the track.”

The Baynes family, firstly through Colin and then through son Kenny and daughter-in-law Penny Baynes, bred the first seven foals from Cool Maiden.

Swain developed and sold John Of Arc who did a great job in Western Australia.

“Penny and Kenny have mostly gone with trotting sires while I have gone to the pacing side of things.”

“I have got a Washington VC out of her next, he ran fourth when he qualified behind that Ann Maree of Nathan Williamson’s that has won a race.”

“We have sold him to Merv and Meg Butterworth.”

The Butterworths also share in the ownership of The Big Lebowski.

Their win with the pacer last week continued an outstanding run of success the Butterworths and Swains have enjoyed over many years.

“Over the years, it goes back probably 30 years, Merv bought a lot of horses off Colin for a start.”

“And the horses that he has bought off us have done a really good job.”

“He likes the breed and he has had a lot of success with them.”

Cool Maiden has struggled to get in foal in recent seasons but that drought ended when producing a Raging Bull filly in the spring.

Swain said he was delighted to get a filly out of the dual gaited producer to carry on the breed with.