Skip to content
Couple have their best horse yet 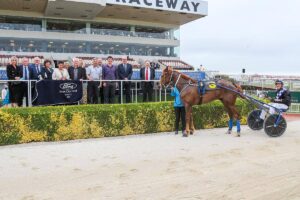 COUPLE HAVE THEIR BEST HORSE YET

After giving Canterbury breeder-owners Keith Ussher and Sylvia White the thrill of their harness racing lives on New Zealand Cup Day, Love N The Port has kept on delivering.

Following his convincing Cup Day victory and his narrow second placing on Show Day, Love N The Port (Love You-Ngaire Margaret-Sundon) came out and won again at Addington last week. After his recent heroics, the Phil Williamson trained three-year-old is definitely top of the pops with Ussher and White.

“We have been breeding for years and he is definitely the best one we have had now,” White said. “We are all involved in racing, the whole family, and we have raced a few.”

“Clovelly Beach (Beach Towel – Nantuckett – Nero’s BB), we raced her and bred from her and Toppathepark (Falcon’s Seelster – Sharn’s Delight – Holmes Hanover), we bred from her and got Arocknatthepark (A Rocknroll Dance) who was pretty good.”

Sylvia White is Canterbury farrier and horseman Adam White’s mother. Adam is the reason Love N The Port ended up in the country’s leading trotting stable

“This one always looked sharp, he always stood out in the paddock. Adam is pretty involved with horses and every time he came up the drive he said Mum you have to go to the Williamsons with that horse, you’ve got to give him the best chance”.

The trotter’s first foal by Majestic Son didn’t make the grade and her second by the same sire died. The couple’s fortunes have taken a dramatic turn for the better with Love N The Port winning at two before competing in the New Zealand Trotting Derby at three. The trotter has clearly thrived during his winter spell and has come back a real force in the spring. Ngaire Margaret has produced a Majestic Son filly this season and she’s booked to What The Hill.

Curiously named, White explained that the trotter’s name is not linked to a tale about ports, sailors or romance. It is a nod to the couple’s holiday destination.

“My grandson wanted Love Shack but the name was already gone. So, I said to Keith you name this one and he came up with Love N The Port. The Port is Port Douglas, we go every year, it is just called The Port over there.”