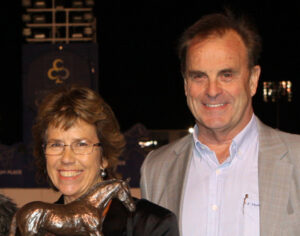 Phil and Margaret Creighton have signed off from their involvement in breeding after five-decades, but the wins have kept on flowing recently.

Got You Covered (Art Major-Cartier-Holmes Hanover) will be keeping the Mosgiel breeders names up in lights for some time yet with the way he has been racking up country cup wins.

The Robert and Jenna Dunn trained four-year-old made it back to back cup victories on the Oamaru grass when taking out the Waimate Cup last weekend.

The win came a month after the pacer’s victory in the Waikouaiti Cup on the same track.

Got You Covered is raced by Wendy Nordqvist after he was sold by the Creightons at the National Yearling Sales.

“I know John Dunn said he wouldn’t mind a stable full of horses like him because he just keeps trying,” Phil Creighton said.

“It was a pretty good run the other day, he just kept coming.”

“I know the owner thinks a lot of him, she has been thrilled with him.”

Got You Covered’s dam Cartier (Holmes Hanover) left six winners for the Creightons before she was lost to colic.

“She left Spot On and Uncle Ben but we lost her to colic and she wasn’t that old.”

“She was a bit like Got You Covered when she was racing.”

“Nicky Chilcott won one with her but she ran about 10 placings, she was always thereabouts.”

“She goes back to our original mare, Mia Moccha.”

“It has been a very good family.”

The Creightons have decided to scale down their breeding operation, sending the last of their yearlings through the ring at the National Yearling Sales earlier this year.

“The last one has gone through the sales, we have been going to the sale for 42 years.”
“We went to a function in Invercargill and they gave us a nice presentation down there and a wee speech.”

“You are cleaning water troughs every week, feeding out in the winter and putting covers off and on and we have had our turn.”

Going forward, the Creightons will still be heavily involved in harness racing, supporting breeders through their purchase of shares in yearlings sold at the National Yearling Sales.

As many will know, they have enjoyed brilliant success with star pacers like Krug, Ultimate Sniper and Heaven Rocks.

“We will carry on with our syndicate horses.”

“We have a lot of luck with the syndicates, mainly through All Stars and Kentuckiana Lodge.”

Phil and Margaret Creighton are good friends with Graeme and Ann Mee who have prepared many yearlings for them as well as racing several horses together.

The Creightons have been on hand to support Graeme while he recovers in Dunedin hospital after suffering serious injuries in a recent accident.