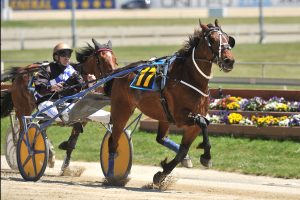 Humble Ladd clears out to win on Show Day

Jim Hunter and Denis Stumbles, both 83, are near enough to lifelong friends and have been in the racing game together for nearly half a century.

“We used to play rugby together; that should tell you how long I’ve known him,” said Hunter, from Taieri.

“And we’ve had horses together for more than 40 years.

“We tried breeding, we tried buying, and these later ones have been better than any others.”

“Denis has been a friend of Ginger Woodhouse’s for a long time and one day Ginger said to him, you can have this horse if you like.

“We finished up buying three off him and Here Comes Pat was the third of them.”

Like Humble Ladd, Here Comes Pat was trained by Phil Williamson in Oamaru and she’s a granddaughter of Woodhouse’s broodmare gem, Young Pat

Upon retiring, she shifted to Hunter’s property and was served by super sire, Sundon, but ultimately missed.

The next season she went to the uber-fertile Majestic Son and Humble Ladd arrived nearly a year later, in November 2014.

“He was born right outside my bedroom window,” said Hunter.

“And after she’d had him, she was so exhausted that she lay down on the ground for ages.

“I actually thought something must have been wrong, she was down for so long.

“Ultimately I had to get the vet out here and he reassured me she was just tired.”

In the five subsequent seasons, Here Comes Pat failed to get in foal to Sundon three more times, but did birth one filly by him.

“The Williamsons have got her, along with the mare; we’ve wound down our breeding operation and got rid of most of our mares.

While Hunter did enjoy watching Humble Ladd win both days at Addington, he nor Stumbles were unable to be on course.

“We’ve both passed that point unfortunately, of being able to travel that far to the races.”

Unfortunately, the Ranfurly-based Stumbles was unable to be interviewed for this story. adly, he is suffering the effects of Alzheimer’s disease.

“It hasn’t been much fun, watching him go through that,” admitted Hunter.

“But I know he still watches the horse race and gets a lot of enjoyment out of it.”

Williamson says he has been pleasantly surprised by the continued improvement of Humble Ladd and says he has no doubt he would have been competitive in Sundees Son’s national record Dominion Trot victory on Show Day.

“He would have run top six, I reckon, because he loves a fast pace and just has so much stamina.

“Definitely, he has improved out of sight in the last year, but he’s always had good ability and a fantastic attitude.

“Stamina-wise, he’s right up there with the best of them.”

“They’ve been with me for at least 20 years and are just the best fellas you could ever meet.

“Right up there with the nicest people I know. It’s just so unfortunate how bad Denis has gotten and Jim’s health isn’t great either.

“To win a race at Addington for them on Cup Day and Show Day was massive for us. It’s just a shame neither of them could get there.”

Williamson and wife Bev were also celebrating at the time of interview, just days after the Show Day triumph, because a little half-sister to Humble Ladd had just arrived in to the world.

“She had a filly by What The Hill at one o’clock this morning.”

Plans weren’t yet confirmed, but it is likely Here Comes Pat will now be served by Majestic Son to try and get a full sibling to Humble Ladd.

The unnamed Sundon three-year-old filly is “getting there; a work in progress” at this stage, but will, at the very least, have a future as a broodmare for the Williamsons.

As for Humble Ladd, he’s now likely to be sold if a suitor can be found at the asking price. But if not, the Rowe Cup beckons.

“Jim sort of said to me that because he’s now handicapped out of racing down south and they can’t travel, it’s probably best to sell him.

“He said they’re too old to come in to another horse now, but all he has to do is ask for a share in one racing close to home for him and I would do that because they’ve been so good to us.

“If he’s not sold, there’s not a lot for him down here now.

“He would go to Omakau for the good trot there and then I wouldn’t be afraid to take him up to Auckland in the autumn for the Rowe Cup.

“He does go pretty good right-handed, too.”