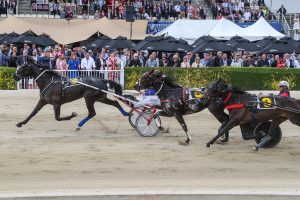 It reached fever pitch when trotter Andy Hall won over two miles on New Zealand Cup day at Addington in the hands of trainer/driver, Nathan Williamson.

Edendale-based Hunter has defied statistics to develop a sought-after square-gaiting family with the foundation mare being by the oft-maligned sire, Chiola Cola.

Of course, Chiola Cola was a brilliant racehorse for the late Shane and Don Hayes, plying his trade in New Zealand, Australia and Europe, but he failed to set the world on fire as a sire.

He left just 27 winners from 154 foals across six crops and only one of them – Tina Turner even able to break two minutes.

Back at the turn of the millennium, then a very much novice Hunter sent the aging Honkin Andy mare, Aron Del (11 wins, $111,289) to Chiola Cola as her final consort.

Despite being a Gr.2 Benson and Hedges Challenge winner,  running second in the Gr. 2 National Trot and fourth in the Rowe Cup, she was a disappointment stud.

To that point she had left just two winners of three races from eight foals.

For whatever reason, Hunter’s move paid off and the resulting foal, Delcola, won six races and nearly $40,000.

“She started off with Tony Barron when he was down here and won her first race with him.

“But I think he was being let down by his blacksmith and they just couldn’t her right; she woudn’t stop cross-firing.

“So I tried her with Megan Irvine and Ivan Gutsell and between them and their farrier, Jock Williamson, they got her trotting a lot better.

“A lot of the credit goes to Jock, I think. He promised me he would figure her out and he did.”

Eventually it was time to breed from Delcola but by then it was clear that Chiola Cola was not going to be a commercially fashionable damsire.

Even so, Hunter liked the family and enjoyed breeding so wanted to persist.

As luck would have it, her first foal, by Andover Hall was the strikingly-coloured Splash Cola.

Her formative years were spent with Williamson, but more recently she’s been on the beach with Regan Todd up in Canterbury.

She’s about to be served by Andy Hall’s sire, Andover Hall, next week and Hunter is very much thankful for her not conceiving this time last year.

“We served her with Father Patrick last year because she wasn’t up much anymore on the track.

“But she didn’t get in foal and because of that, we raced on and she added a 5YO and Older Trotting Mare New Zealand Record to her credits, as well as a Group 3 at Addington.

“So it was a bit of a blessing in disguise, I guess.“

After Splash Cola, Hunter bred a full sister by Sundon that never raced and is now in his broodmare band, named Suncola.

“We only tried her as a three-year-old and both Nathan and Phil Williamson couldn’t get her going, saying she wasn’t well-gaited.

“I wasn’t prepared to waste more time and money on her as a racehorse, so put her in foal.

“That hasn’t been the greatest of success stories either; we have a Pegasus Spur that is slow, lost her next foal and then she missed.

“Her latest foal is just a yearling colt by The Pres.”

Delestic won three races for Williamson but would “go like the clappers the whole time” and run herself in to the ground.

Eventually she retired and sold as a broodmare to fellow Southland breeder, Brent Smith, of ‘B D’ prefix fame.

Delson showed immense promise with Williamson before being sold for good money to Graeme Rogerson and continues to race well in the north.

“I regretted selling him for a while, but I only did so because I got a good price and Nathan was telling me that he reckoned we had a better one at home.

“We all know horses can make liars out of the best of us, but thankfully Nathan was right because that horse was Andy Hall.

“He’s always shown Nathan a bit of ability but we’ve been patient, not wanting to over-race him and send him through the classes too quickly.”

Being by Andover Hall, the feeling was the horse would benefit from time and patience.

“It’s weird because the sire won big races as a juvenile, but it’s true he does tend to leave bigger horses that need time to grow and mature.”

Delcola actually had a tough time foaling Andy Hall and suffered an internal rupture, meaning all subsequent attempts at breeding have been by embryo transfer.

“I thought it was a great system at first because the first two times we did the transfers, we got two foals and you don’t have to get later and later every year.

“But that was inexperience talking because we came back to earth pretty quickly after that.

“The next two years we got nothing.”

He had pretty much ‘upped stumps’ on Delcola as a broodmare at the start of the year, but Splash Cola’s upgrade and the emergence of Andy Hall has seen him try his luck again.

“She’s at Wai Eyre Farm now. And she’s since won Southland Broodmare of the Year, so I am kind of obliged to give her another go.

“She’s been served by What The Hill and we have our fingers crossed.”

“Nathan couldn’t get Port Pegasus gaited and suggested giving him to Brian Norman because Brian does his own shoeing.

“He could be the next failure out of the mare, but he does have a motor.

“I haven’t actually heard from Brian lately and I’m not sure if that’s a good or bad sign.”

As for Andy Hall, he’s gone home for a few weeks’ let-up.

One thing’s for sure – there are no cows anywhere near his spelling paddock.

“He absolutely hates cattle. When he qualified they were on the inside of the track at Wyndham and Nathan had to bring him wide because he was so scared.

“When he went for a spell at my son’s block, with another horse, he just wouldn’t settle.

“It took them a while to work out what was wrong with him, because he just kept running up and down the fence line stressed out.

“So we know, now, to keep him as far away from them as possible.

“It’s so bad he might even try and jump a fence to get away from them.”