A tribute by Frank Marrion, HarnessXpress

Polished horseman Denis Nyhan passed away this week after a relatively short illness. 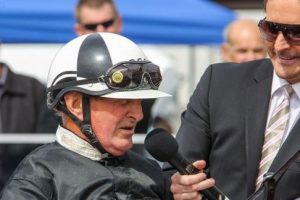 He’d turned 82 in April and still had a licence last season, although the last horse he raced in The Fox was over three years ago now.

That marked the end of a training career which began in 1969 although Nyhan was a junior driver in the 1955/56 season, 66 years ago, and won his first race at the age of 17 in December, 1956, with Skyvale at Ashburton.

Not long after he won his first race at Addington when drove he drove the top mare Dresden Lady to win for his father and trainer Don Nyhan, who drove the third placed Ricochet.

A few years later, Nyhan won his first New Zealand Cup when he drove Lordship to win for his parents, trainer Don and owner Doris.

Nyhan was just 23 at the time and Lordship was only the second four-year-old to win the Cup, following Lookaway and Maurice Holmes a few years earlier.

Cardigan Bay had been the favourite to win the Cup that year, but Lordship and Nyhan also beat him handsomely in the Free-for-All on Show Day.

Nyhan got the drive on Lordship when he was a two-year-old following a training accident at home which put his father out of action for a while.

Lordship promptly won the Welcome Stakes and Doris decided to leave ‘the boy’ on, much to Don’s disgust.

The Fox, the last winner for Nyhan, who also drove him when he won at Addington as a three-year-old five years ago, aged 77, will race again in due course for Nyhan’s wife Denise.

“Dad was training him last year when he broke his wrist and a bit later he got tipped out (of the cart) and needed to have some more time off,” said Margo Nyhan yesterday, one of two children along with daughter Kim.

“So we wound up training him, but when we had our smash on Waitangi Day, Denis didn’t want him going to someone else.

“So out he went again, but we’ve got him back in work again now and he’s coming up rather well actually.”

Margo said she suspected Denis wasn’t looking that well in about March and it turned out he had a kidney problem.

The problem worsened to a point where he was bed ridden, and Nyhan wound up in hospital 11 days ago, where he died from complications following an internal infection.

I got to know Denis very well over many years as in one big way, he was responsible for getting me hooked on this game.

In November, 1974, I would have been 13 and I was in Form 2 at St Andrews College, where a classmate was Rhodes Abell.

His father Tony had a horse called Kotare Legend in the Cup and he was one of the favourites along with Young Quinn and Robalan.

Kotare Legend was a four-year-old and was at the top of his game, having just won nine races as a three-year-old along with three lead up races to the Cup, including the Ashburton Flying Stakes, where he’d come off 20m to beat deadheaters Speedy Guest (10m) and Robalan (35m).

Trained in Rangiora by Leicester Tatterson, Kotare Legend had been parked, led and trailled Noble Lord (driven by Don Nyhan) when driver Barry Anderson went for the doctor at the 500m and seemed to have put a winning break on them.

Young Quinn was just battling in the one-one down the back for Peter Wolfenden, but Nyhan had guided Robalan on to his back and was patiently waiting on the home turn and spotting Kotare Legend about half a dozen lengths.

The sight of ‘this thing’ called Robalan going whoosh past a hapless Kotare Legend and careering away to win by over two lengths to the memorable tones and description of Reon Murtha was enough to have this lad hopelessly hooked.

Three days later Robalan waltzed away with the NZ Free-For-All carving seconds off the national record.

Robalan was an eight-year-old and at the back end of his career, so I’d missed his best seasons, which included winning 12 races as a seven-year-old.

I became obsessed by this horse, researching every word written about him and making up scrapbooks from newspaper cuttings.

Young Quinn would often get the better of Robalan that season and swept through the Inter-Dominions in Auckland that year and in a season where he won as astonishing 19 races in New Zealand alone.

He also popped over the Tasman during that long and busy season and easily won the Miracle Mile, winning 21 of 25 races in all.

My younger sister took great pleasure in being his No.1 fan just to annoy me, but Robalan would have his crowning glory in the Easter Cup that season, coming off 35m after losing that much at the start again after a tardy beginning.

Young Quinn had set the two mile record at 4.06.7 during the Inters, but Robalan had gone some unheard of sectionals in going 4.07.4.

Around this time, I’d had plans to be an architect, but by the time I got to the sixth form, I’d flagged worrying about University Entrance because I’d made up my mind to leave school and become a ‘trotting reporter’.

I’m not exactly sure why I changed my mind, but it probably had something to do with having a passion to write about horses like Robalan.

I soon began as a cadet with the Trotting Calendar under Tony Williams and I was sitting in the old press box the day Lord Module won the Cup in 1979, but that is another story.

End of a family dynasty

I would meet Denis Nyhan in the ensuing years and I well recall visiting his property in Templeton when Robalan was at an advanced age.

While Margo is a successful trainer in her own right, the passing of Denis signals the end of a family dynasty which began when Don Nyhan acquired Johnny Globe.

Don had briefly trained his dam in Sandfast as a two-year-old when he was based at Hutt Park and had been impressed enough.

But she was never the same after getting out of her yard and getting trapped in a deep bog, where she almost died before Nyhan and some mates managed to get her out.

Some years later, Sandfast’s owner had decided to return to England and asked Nyhan if he wanted her and her colt foal by Logan Derby.

Nyhan was unimpressed by the small and weedy colt foal, but Doris persuaded him to spend the 50 pounds they had saved to buy her a fur coat.

Johnny Globe became a champion and a public idol and when he finally won the New Zealand Cup aged seven in 1954, he’d come off 48 yards to win in 4.07.6, which shattered Highland Fling’s race record by a full three seconds.

Johnny Globe and Nyhan were mobbed that day by an adoring crowd and a game runner-up was Young Charles, the sire of Young Quinn.

Johnny Globe retired the winner of 34 races and over 42 pounds, the highest amount at the time by a standardbred or thoroughbred raced solely in New Zealand.

Johnny Globe also became a great sire and from one of his first crops came Lordship, who won 45 races, also set a stakes winning record, and also became a leading sire.

Lordship would win a second New Zealand Cup in 1966 as an eight-year-old, coming off 42 yards to beat Robin Dundee.

Not long after, Denis would venture out on his own as a trainer, and Lordship was driven towards the end of his career by Don or Denis’ brother Barry.

The brothers had become estranged in the 60s, apparently after an argument in the stables, and would rarely speak to each other again.

They were like chalk and cheese – Barry a rough diamond who never suffered from an ambition whereas Denis just oozed class.

Denis wasn’t used a lot as an outside driver in a career where he won 475 races, but he also won a Rowe Cup with Cee Ar for Rod DeFilippi, a New Zealand Oaks with Ruling Lobell for Des Grice and an NZ Sires Stakes 2yo Fillies Championship with Kisumu for Robert Dunn.

Denis would train the winners of 269 races, most of his success coming in the early 70s and in the first half dozen seasons of his career.

In fact he had 139 wins in the first eight seasons of his career, or more than half his total in six decades.

In 1972 when he won 28 races in his fourth season, it tied him in third place on the Trainers Premiership with Ces Donald behind Jack Smolenski and Roy Purdon.

While Robalan was by the imported Lumber Dream and Nyhan won a Dominion in 1975 with Hal Good, much of his success was based around colonial sires.

Breeders Stakes, by Van Dieman) were also good performers for him in the 70s along with Relinquish, a trotter by Lordship.

But Nyhan was also forthright in his views and didn’t suffer fools easily.

As such his owners and his numbers gradually dwindled over the years, to a point where he was pretty much just training trotters bred by him and Denise.

The latter was a daughter of Bill Doyle and along with his other daughters in Helen Pope and Lyn Smith, they inherited the good trotting mare Look and bred from her taking turns.

One of the foals from Look for Denise was Total Perception (7 wins), and she produced their last good performer in With Intent along with The Fox.

Denis would often arrive with a well-timed run for second money and no penalty, but he was that good as a driver, he could never be ‘spoken to advisedly’ by the stipes.

Geeky Looking and Take For Granted were also handy trotters from Look, while another good trotting mare for the Nyhans was Scotch Time, who produced useful sorts in Rebel Time, Validity, Monopolise, Humiliate and Morning Has Broken.

Denis also had ambitions as an administrator and enjoyed seven years on the executive, including a stint as chairman of the handicapping committee, where he was greatly respected.

He was the original ‘Double D’ and long before Dexter Dunn came along – a star as a young driver whose initials would lead to him being known as ‘Dashing Denis’ due to him being such a dapper dresser.

His horses always looked very smart, but Denis looked even better, and he carried himself as the consummate professional.

There will be no fancy funeral for Denis given the uncertainty and difficulty around making any such plans as we move down levels in the lockdown.

Knowing the respect he will be accorded, and the number of people wishing to show it, Margo thinks they will probably hold some sort of function at Spreydon Lodge when Canterbury returns to Level 1.

Denis Nyhan will forever be remembered as the man behind two of the greats of the sport – Lordship and Robalan.

Success came to him quickly and easily, and once he had attained the highest levels of achievement, he spent the rest of his life just enjoying doing his own thing and not being answerable to anybody else.

The black colours with the white hoop may have faded over the years, but they haven’t quite disappeared just yet.

And when they do reappear one day soon, the memories of that famous November day in 1974, will once again come flooding back.