Skip to content
Dont Bother Me None is classics material

Dont Bother Me None is classics material

Dont Bother Me None, who has won 11 of his 20 starts in Western Australia and has won his way back to a NR92 mark, is being aimed at the major four-year-old classics later in the season. 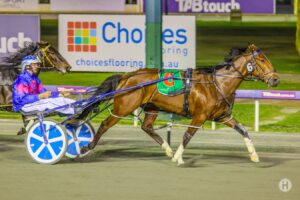 He is a member of an old time New Zealand family, that founded by the Wildwood mare Rosalie,  which was represented by the winners of the $50,000 Pinjarra Cup (Diego), the Kawatiri Cup (Buckskin) and the Manawatu Country Cup and Waikato Cup in Rough And Ready during the past month.

Bred by Steve (Hoops) and Catherine Butt, of Birchbrook Breeding, Dont Bother Me None was knocked down to Brent Mangos for $40,000 at the Christchurch yearling sale in 2019. He was later sold to Perth trainers Greg and Skye Bond as an unraced two-year-old.

Unfortunately Corbell left dead foals to her next two matings after Dont Bother Me None and was subsequently sold in-foal to the Captaintreacherous horse Captain Crunch to Goulburn (NSW) breeder Mathew Day. She has produced a lovely colt foal which has been earmarked for the Sydney sales in 2023.

Corbell was a Christian Cullen mare from Going Royce (2:00), an El Patron mare bought as a yearling by Butt and Hooper and who won two races and secured three placings in a brief career.

At the stud Going Royce really established the Rosalie tribe to some purpose. She is the dam of 11 individual winners, seven of whom took records of better than 2:00 including an outstanding pacer in Tribute 1:54.8 ($587,772), a winner of nine Group races and a former NZ two-year-old mile record holder, the NZ Kindergarten Stakes winner Pentium and a top Tasmanian pacer in Pushkin 1:58.8 ($150,544).

Interestingly, the first three dams of Dont Bother Me None have produced 27 foals for 18 winners including 11 in 2:00.