The emergence of Betting Line’s two-year-olds in North America has Empire Stallions hopeful it has a second pin up sire in their ranks this breeding season. 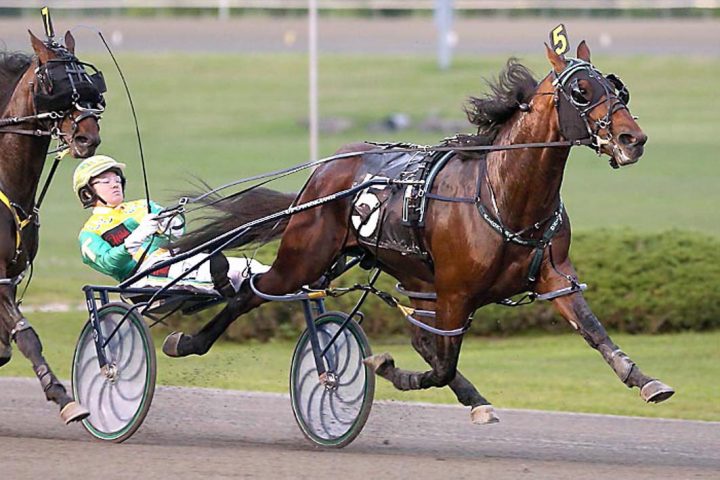 There are few prizes for guessing who the first one is – the most sought after pacing stallion in the world in Captaintreacherous.

He needs no introduction after leading every two and three-year-old pacing category going in North America and with his progeny being the hottest of commodities at this year’s yearling sales in New Zealand.

His incredible momentum has translated in to the superstar stallion not only being booked out in Australasia for this season, but also being in the rare and possibly never before seen position of filling up his book for next spring.

“He was booked out very early and we are still getting enquiries,” Empire Stallions general manager David James said.

“But, there is next year and we have started on expressions of interest for next season already, which is incredible.”

There were just 94 live Captaintreacherous foals in New Zealand leading in to the upcoming breeding season.

There will be around 60 mares served here this season with a split of around 50-50 split with Australia of the limit of 120 mares the sire’s owners have limited him to Down Under.

Empire Stallions hope to be in the similar position with Betting Line next year as they are with Captain Treacherous right now, minus those restrictions.

James thinks Betting Line could be, with the platform the son of Bettor’s Delight has laid following the progress of the very first of his progeny that have hit the crop in North America.

“Keeping in mind that 140 is the maximum number any stallion can breed in the United States, Betting Line had 119 foals – those are his first crop of two-year-olds that are currently racing.”

“In less than two months he had 90 starters, he was second amongst all stallions, one had 91 and that was Somebeachsomewhere.”

“He is in a terrific position, for a first crop to have 90 starters from just 119 foals is just sensational.”

“It does shows you how great gaited they are, how sound they are and how they can get around any size track.”

“And they are racing and competing mainly in the state of Pennsylvania in the sires stakes, which is the home of Captaintreacherous and Somebeachsomewhere and on and on.”

“So, he is a very competitive horse and the people love them.”

“They are easy to break in and get going, so I am looking forward to seeing what they can do here.”

Like Captaintreacherous, Betting Line has a relatively small number of 41 foals on the ground in New Zealand ahead of the upcoming breeding season.

His numbers are set to grow with the sire’s results from North America and his strong sales results in New Zealand earlier this year encouraging breeders to support him.

“I think you are going to be shocked with what Betting Line is going to do here this year, he is going to set the racing world alight.”

James has suggested there is a real positive for Betting Line’s supporters from a practical standpoint heading in to the breeding season.

The general manager believes the stallion can offer some form of certainty in what is set to be a tricky COVID 19 climate.

“Frozen semen has been more widely accepted everywhere of late and it has been very, very successful.”

“For example, Betting Line had an 86.7% success rate [in Australasia] with frozen semen last year.”

“I think in this day and age frozen semen is going to be a bit of an advantage.”

“I think we are going to find that shipping fresh chilled semen this season, with COVID19 and all the restrictions on state lines and country borders and that type of thing – it is going to be somewhat difficult.”

“Frozen semen is already at the farms waiting for the mares to come to be served.”

“As opposed to the farms having to call for it when they are ready.”

All of the sires Empire Stallions will offer in New Zealand and Australia will exclusively be available via frozen semen this year.

They include a new addition to the line up in Stay Hungry.

A stablemate of Captaintreacherous and Betting Line at Hanover Shoe Farms in Pennsylvania, the son of Somebeachsomewhere seemed a good fit for Empire.

“With the passing of Somebeachsomewhere, a year ago this past January, I was looking for another stallion to stand here,” James said. “Stand Hungry was a horse that I really did like on the racetrack. He could race from behind, he could race in front, he just appealed to me.”

“He is just a beautiful 15.3½ hands, he wore almost no equipment racing – he never wore any boots – I just loved everything about him.”
Stay Hungry brings a standout pedigree Down Under and comes from a strong maternal line.

“Her pedigree matches up very well with most pedigrees in Australia and New Zealand,” James said. “It is the family of Delinquent Account, the dam of Artiscape, who was a pacing mare of the year herself. Arterra, the dam of Western Terror is in that family as well. It is a family that really does appeal to breeders once they have a good look at it.”

Stay Hungry has just produced his first live foals in North America and the reports on them are positive. “His first two seasons at Hanover Farms he bred 140 mares – the maximum,” James said. “He has one crop that foaled this year and they are lovely foals. I have had 20 people that have them tell me they just love them. They’re big shouldered and athletic looking, a nice girth to them, they are very impressed with them. They have just been weaned, in the last 30 days or so, so we will watch them between now and the end of the year.”

Last season’s deeds of his Hunter Cup and Miracle Mile winning son have sparked interest in as the super sire’s short but incredible stud journey nears an end.

“New Zealand is the only place in the world where there is any Rocknroll Hanover semen left.” “He is booking well. It won’t be a large, large book, but it will be a very nice book.”

“Of course with King Of Swing being one of the very best horses racing in Australia that is leading his lustre.”