This article is written by Dave Di Somma, Harness Racing NZ, and is republished with permission.  By The Pres, Destiny Jones is the best-performed offspring of the unraced Sundon mare Galleon’s Destiny, who produced five foals of which four were winners. Galleon’s Destiny’s granddam Diedre Hanover was bred at Hanover Shoe Farm in 1979 and owned in NZ by Sir Roy McKenzie. Diedre Hanover became a prominent matriarch, her descendants including Diedre’s Pride (21 wins), Sunny Ruby (19 wins), and Monbet (23 wins) to name just three top trotters. – Ed. 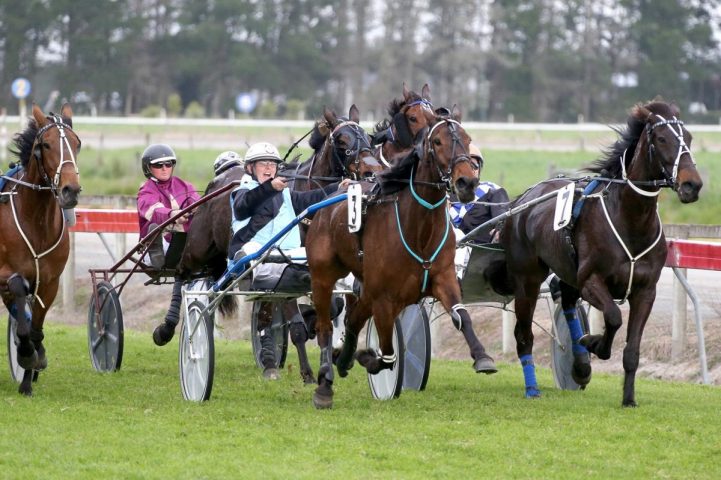 Ten-win trotter Destiny Jones has run her last race, with owner-trainer Dean Hunter saying he has his “fingers crossed” that she’ll now become a star in the broodmare paddock.

It’s planned to have the nine-year-old mare in foal soon to boom sire Father Patrick, her swansong on the track coming at the Dominion Handicap Trot on Show Day where she finished last.

She hasn’t been at her best of late, with Hunter saying she has been troubled with what he says is “an allergy where her lungs gunk up with mucus and she can’t run any good – it’s like asthma. She’s had it at this time of the year for the last 2-3 years.”

And so the decision was made to retire her – “this was always going to be her last year of racing.”

And Hunter has another fond memory from just last year.

“One of her biggest runs was her fifth in the Rowe Cup.”

In the Group One feature at Alexandra Park she missed away and was last early, only to finish fifth behind stars Sundees Son, Speeding Spur, Majestic Man and Lemond.

“She was not far off them.”

Twice named aged trotting mare of the year (2018 and 2019), her fastest mile was a 1:55.9 when she ran third to Oscar Bonavena and Majestic Man at Cambridge on Christmas Eve.

The horse actually started out with Geoff Dunn in Canterbury before Hunter took over. He was living in Blenheim at the time and initially things were not easy.

“I was ready to send her back, every time she’d deck me by falling onto the track.”

But it was a hiccup in an otherwise successful relationship and Hunter trained her nearly her entire career apart from a spell with his good friend Kevin Townley in 2017 so she could be closer to the big races.

“And that was just after the Kaikoura road was closed because of the earthquake. To travel to Christchurch through the Lewis Pass was six and a half – seven hour trip so I contacted Kevin to see if he was interested.”

Hunter, who’s retired and describes himself as just a hobby trainer, moved south to Christchurch nearly three years ago and bases himself at Mark Purdon’s old stables at Russley.

At nine Destiny Jones could have close on a decade of breeding ahead of her with Hunter saying he won’t be racing the progeny.