Skip to content
From Fighting Foal to Heavyweight Knockout 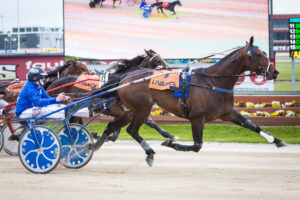 From Fighting Foal to Heavyweight Knockout

Charlotte Williamson (nee Purvis) wouldn’t give up on Oscar Bonavena (Majestic Son-Now’s The Moment-Yankee Jolter) when he was on the canvas. He rewarded her faith by delivering the Purvis family a Group One victory as breeders in the New Zealand Trotting Free-For-All on New Zealand Cup Day.

The Mark Purdon and Hayden Cullen trained star bounced back to his best form and made his battles with knee problems look like a distant memory when he powered down the outer to win the 1980m feature. The classy trotter then went on to notch a Cup Week double when delivering a similarly powerful finish in a handicap event over 2600m on Show Day.

The victory wasn’t just reward for Williamson’s faith, it delivered her father John his first Group One win as a breeder.

“It was a huge thrill, I watched the race with the family and it was great,” Williamson said.  “It was Dad’s first Group One win as a breeder. He has a few of the family coming through so hopefully they can follow in Oscar’s footsteps.”

Williamson’s involvement with Oscar Bonavena spans well past the first few days of his life, but his early challenges were in the forefront of her mind when he crossed the line in Tuesday’s Group One.

“He was very weak when he was born, he couldn’t stand up and drink off his mother. We had to bottle feed him, but thankfully once he was a little bit stronger Nevele R (Stud) were able to get him drinking off his mother.”

Purvis may be modestly playing down her involvement given she was pictured cuddling into the foal on the ground at the time, as she nursed him back to health. After showing such dedication to the foal, Williamson was entrusted with his breaking in once he had put his early struggles behind him.  With the help of master trainer and her father-in-law Phil Williamson and husband Matthew Williamson, the formerly weak foal soon turned into a smart-looking trotter.

“I got a lot of help from Phil and Matt, they deserve most of the credit. Phil said when he first saw him that he looked like a really smart horse. Then once we got him going Matt really liked him too.”

Oscar Bonavena bolted in in his first start from Phil Williamson’s stable before running a big second to the leading two-year-old of his year in Enhance Your Calm in the Sires Stakes Championship. Oscar nearly downed the favourite in that race which clearly captured the attention of Mark Purdon, who arranged the purchase of the trotter for his father Roy and North American trainer and former Kiwi Chris Ryder in a big-money deal.

Though not directly involved, Charlotte Williamson still gets a big kick out of watching the foal she nursed back to health win.

“I have followed him right the way through.”

Purvis and Moffat also have My Moment’s Now (Andover Hall) to carry the breed on with. The four-year-old, who last stepped out in July, has won three of her 16 starts for trainer Matt Purvis, John’s son.