Skip to content
Funky Monkey from noted family of trotters 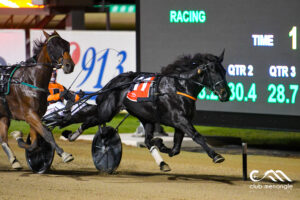 Funky Monkey (Monkey Bones – Yukon Quest – Sundon), a winner at Menangle last Saturday in 1:55.4 when having her first start for almost five months, is a five-year-old trotter of some potential. Now in her third season of racing, she has had 24 starts for 11 wins and four placings and $90,790 in stakes.

Funky Monkey began racing as a three-year-old with Oamaru horseman Phil Williamson, winning once at Invercargill with a placing from six attempts, while the following season she won again at Invercargill before being sold to a Sydney-based syndicate.

From 15 starts in NSW she has won nine times – all at Menangle – and has clocked six sub 2:00 winning miles.

Bred by Bev Williamson, Funky Monkey is a daughter of the grey stallion Monkey Bones (1:56 son of Andover Hall), who has been one of New Zealand’s top sires of trotters in recent years. He has sired such winners as Idle Bones 1:53.6 ($214,768), Overzealous (NZ 4YO Trotting Mare of the Year), Scallywag Sam, Sharon’s Millicent, Idle Monkey, Silver Power and other smart trotters.

Yukon Quest, the dam of Funky Monkey, was by Sundon, the champion sire and broodmare sire of trotters in both Australia and NZ for more than a decade.

“She was injured in a training accident. She qualified but never raced,” Bev Williamson said.

Funky Monkey is the only winner from four foals of racing age left by Yukon Quest.

She now has a yearling filly by Majestic Son and is carrying a positive test to What The Hill.

Her dam, Little Contessa, was by Britewell, who also distinguished himself as a sire of trotters, from Game Princess, a Game Pride mare who left the Cup winners King Whiz (25 wins and $128,469) and Prince Whiz.

Others from Little Contessa have been Chinese Whisper (1:57.6), a winner at Melton recently, the Albion Park victor Davey Mac, Heard The Whisper (7 wins) and Maori Invasion.

Besides Yukon Quest, the Williamson’s are breeding from two other Sundon daughters of Little Contessa in Tessa’s Pride and Tessa’s Last.

“Tessa’s Pride has a three-year-old filly by Majestic Son that is qualified and a weanling colt by What The Hill that will likely go to next year’s sales, while Tessa’s Last is in foal to Majestic Son,” Bev said.

There have been many good trotting winners all along the line from this family including Lord Alias, a former top NZ juvenile who later won a string of races in Australia, and Rolleston Lad (Scotch Notch Memorial).

Editor’s note :  Sad news: last weekend Funky Monkey’s great run temporarily suspended with her out for six months with a leg injury. We wish her a speedy recovery