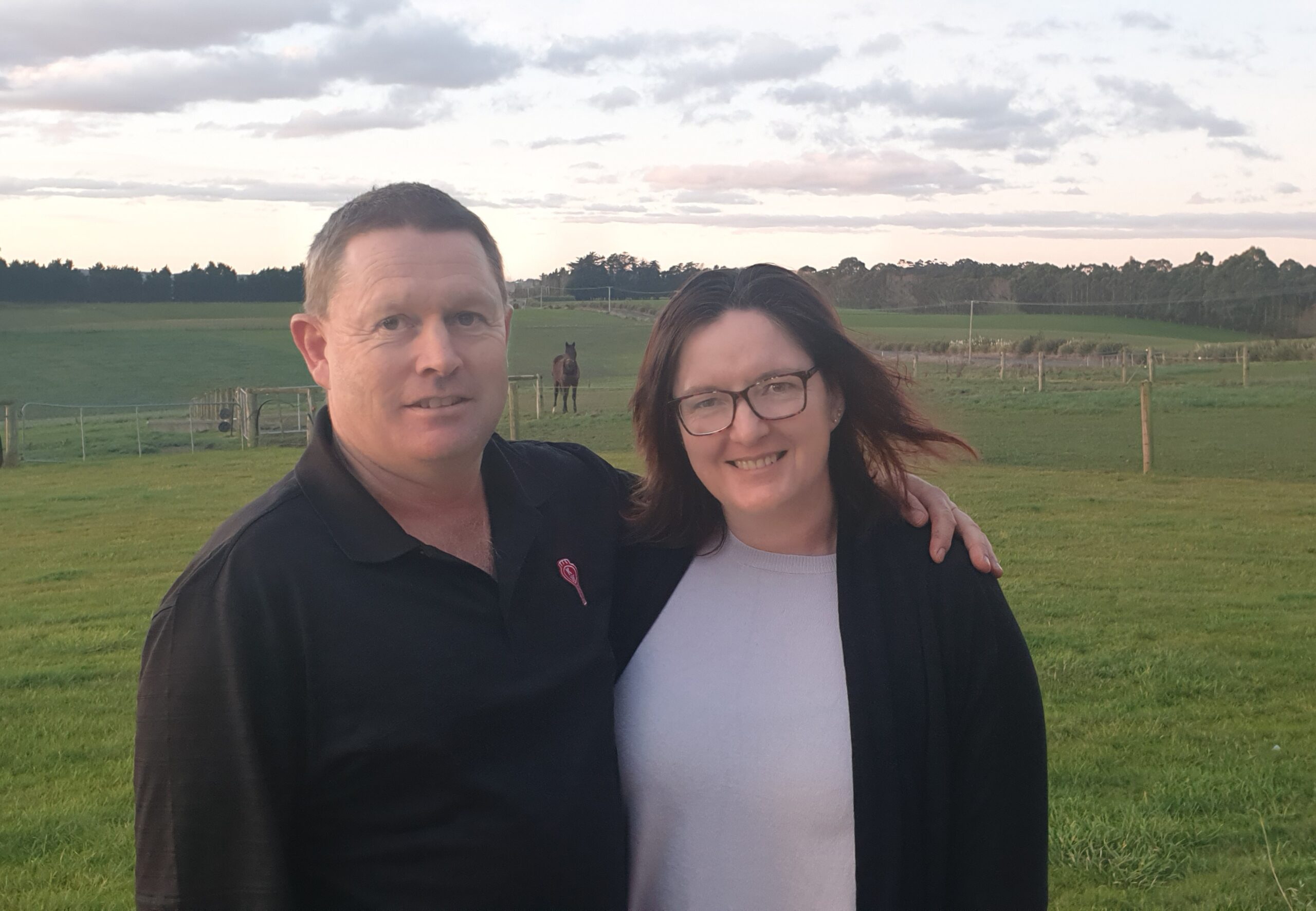 Greg and Jolene with Neville (BlueBoy) in the background

South Otago breeder, Noel Bennett, passed away in December 2015 contented and at peace knowing his horses would be well looked after.

In fact, the day before he died, Mr Bennett’s son Greg and his daughter-in-law Jolene assured him that his broodmares and racehorses would breed and race on.

“Like Dad we were sheep and beef farmers, but unlike Dad we didn’t know much about the horses. However, he passed away happy knowing we would do the right thing by his horses.

“Dad absolutely loved them. Sadly, he died from melanoma, and now nearly seven years later we are enjoying his horses too – especially the breeding side,” Bennett said.

In fact, the Balclutha couple bred their first winner at Alexandra Park last Thursday night when the aptly named Miki Noel won the third race – the Metro Performance Glass Maiden Pace. It was the 3-year-old Always B Miki gelding’s first start and he won easily by one-and-three-quarter lengths.

Peter and Vaughan Blanchard do the training at Pukekohe, while Cambridge reinsman, Peter Ferguson, was in the bike.

“Miki Noel is out of one of Dad’s favourite mares – the unraced 2011 Washington VC mare, Clifton Christine. He thought a lot of her and believed she had a lot of potential as a breeding mare. Dad also bred from her mother Clifton Joan (by Falcon Seelster).

“Dad was good friends with Keith Norman, who stood Washington VC. Keith was a great help when Dad died. He advised us at Bryleigh Stud which mares crossed with what stallions etcetera when we were starting out.

“Marty Denton also gave us a lot of support after Dad died. He had been helping Dad with his horses while he was ill and Marty was a great help to us while starting out, and he is a great friend today.

“Without the help from Marty, Keith, Mosgiel trainer Craig Buchan, and uncle Ian Bennett, who also breeds horses in South Otago, we would have gone into all of this blindly.

“There’s been many other helpful people as well, including our current trainers, Alex Milne and Brad Williamson, but I’ll never forget the help we get from these guys in particular,” Bennett said. 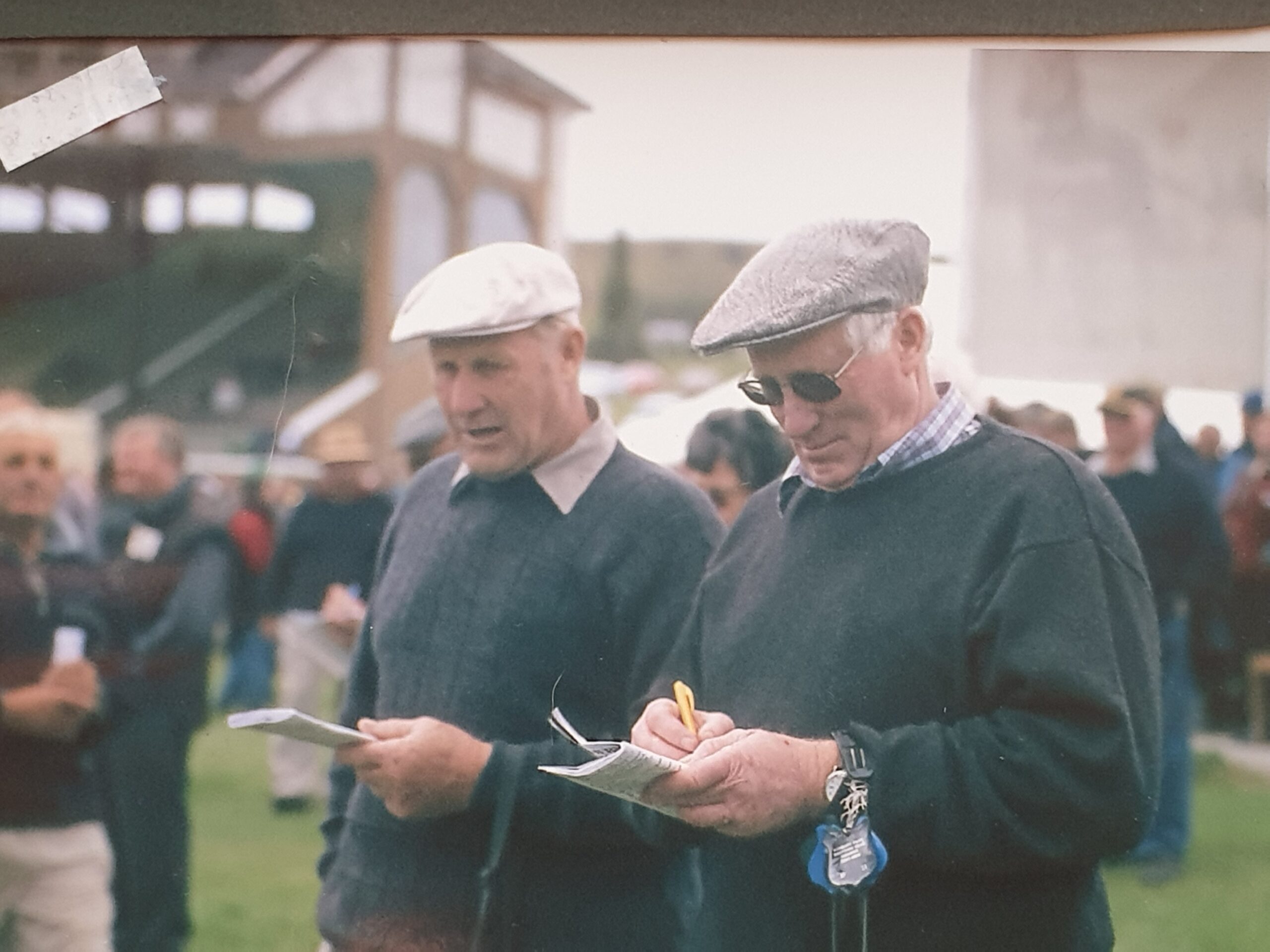 “We were getting too many horses and Dad told me that in order to make ends meet you sometimes had to sell the good ones as well as the not-so-good ones to stay afloat.

“Peter bought him after he won a Workout at Wyndham (October 2021). Alex Milne jacked it all up,” Bennett said.

The Bennetts said they enjoyed watching their father’s namesake win at northern headquarters.

“This was a very special win because it was our own first breeding triumph. It was a great thrill. We will continue to watch the progeny race, whether we own them or not.

“To be honest, we enjoy the breeding side of the industry, working with the young horses. I enjoy the racing, and now see the thrill Dad got out of it. We love the foals and the different personalities they all have.

“Dad named a lot of his horses after the suburb we farmed in, at Clifton (15 minutes from Balclutha). Like him I now take a lot of pride in the progeny that his broodmares are leaving,” Bennett said.

Miki Noel came in 2018 and is followed by the 2-year-old Sunshine Beach black colt, Sunshine Shelby.

“He’s in the front paddock and has had one prep with breaker, Craig Buchan at Mosgiel and will come into full training soon.

“The mare has also left us a full weanling sister to Miki Noel. I’m not sure whether to put her in the Yearling Sales or keep her. Time will tell,” Bennett said.

He said he didn’t have the mare served last breeding season but is likely to go to Always Be Miki again this season.

“I’ve liked Always Be Miki since the time I read about him in ‘Breeding Matters. I was impressed that he had broken down yet he still had the tenacity and toughness to come back  better than ever.”

Bennett said he took over the breeding with Clifton Flier after the one-win Mach Three mare, Clifton Jessie was born. “That was the last foal Dad bred and probably his biggest concern was where his baby was going to go”

“We’ve had some fun times. Dad had been involved since the early 1980s and we did grow up around the races and horses on the farm.

“He raced the year Dad died and was exported to the United States where he won a lot more races. That was a highlight.

The Bennett’s have also taken on the mares from another old local breeding identity, Neville Humphries. The Moth and Smokin Princess have produced good horses themselves.

Neville owned The Moth (by Caprock) and she won five, but it was one of his greatest thrills to have that mare’s son, Letspendanitetogetha (by Washington VC), line up in the 2018 New Zealand Cup,” Bennett said.

“We actually have a full-brother to Letspendanitetogetha in the paddock. He’s a Washington VC – The Moth gelding named Blue Boy. The Moth was last served by Fear The Dragon in December,” he added.

The Bennetts said they had been very lucky with the help, but also extremely fortunate to have started with the breeding lines from both Bennett Senior and Humphries.

“They were two very experienced, passionate and knowledgeable men who have had decades breeding and participating in the sport. Without their input with their breeding over the years, we wouldn’t be in this position today with our horses,” Bennett said.