Skip to content
Heritage in Harness: Time Up The Hill

Heritage in Harness: Time Up The Hill 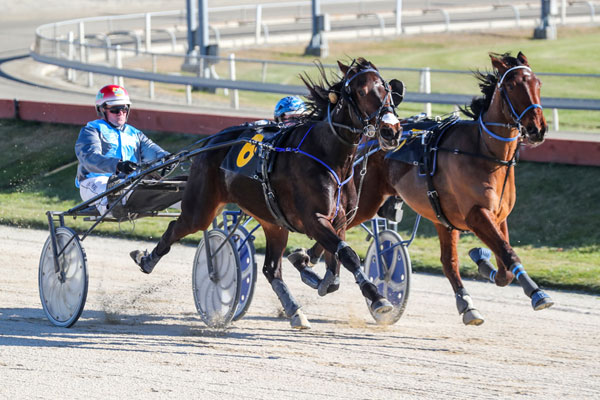 The high quality of trotting bloodlines now available in New Zealand is really showing out in the results of races for the young squaregaiters.  The Muscle Hill filly Time up the Hill, winner of two as a juvenile, cemented her ranking when she took out the R40-54 Welcome NZ Horse Ambulance Mobile Trot at Addington recently, ahead of another highly promising 3yo in Outamyway.

Time up the Hill has thus taken up where a more-than-handy line of maternal ancestors went before. She is the first foal of Majestic Time, winner of eight for the Ward family and like her dam trained by Michael Ward at West Melton. Majestic Time won two Group 3 races – the Hambletonian Classic and NZ Trotting Oaks – and was Group 1 placed in the 2YO Ruby and NZ Trotting Derby.

Majestic Time’s dam was the Sundon mare Time To Shine, herself a winner of five for the Wards. Time To Shine’s dam Ilsa Hanover (by Chiola Hanover) didn’t race. But from here back the maternal line gets really interesting.

Ilsa Hanover’s dam was the top trotter of the 1970s Ilsa Voss.  By Tuft from the U Scott mare Soft Magic and foaled in 1972, Ilsa Voss won 14 and beat the best performers of her time.  Trained by ‘Ripper’ Read at Ashburton, Ilsa Voss has the distinction of winning four races in 10 days. That was achieved over the 1977/78 Christmas holiday period: three races at Alexandra Park, then returning south to take out the Canterbury Park Trotting Cup at Addington.  In her wake on those occasions were horses like Nigel Craig (26 wins and the first trotter to break 2.00 in NZ), Waipounamu (17 wins) and Framalda (22 wins).

Soft Magic won just one race, at Blenheim in 1967. Her first four foals all performed well, three by Tuft including Ilsa Voss, and one by Jerry Adios. The Jerry Adios was Rippers Delight, winner of eight as a 3yo for Read and trainer Kevin Holmes. After earlier wins in the North island Oaks and Thames Ladyship Stakes, Ripper’s Delight, driven by Holmes, lined up against the colts in the 1975 Great Northern Derby, prevailing in a tight finish over Tricky Dick (Peter Young) and Final Curtain (Peter Wolfenden).

It took until 2020 for another horse to take out the Northern Oaks and Northern Derby double (and another filly to win the Derby), that being reigning 3yo Filly of the Year Amazing Dream.

Jerry Adios was imported from North America by Noel Simpson, a stalwart of standardbred breeding who at the peak of his involvement in the late 1950s had 19 stallions standing in Australasia. Jerry Adios stood two seasons in NZ before moving to Australia.

Just to show one can never be sure if the next foal will pace or trot, from the same crop as Ripper’s Delight, Jerry Adios sired Western Approach, who couldn’t qualify as a pacer. Western Approach came in first in the 1975 NZ Trotting Derby at 150 to 1, only to be relegated to 3rd for breaking on the line. His best win came in the 1977 Banks Peninsula Trotting Cup, with Ilsa Voss finishing 5th.

Rippers Delight left six foals of which four raced with moderate to no winning success.  Her fillies produced nothing of note, and the pacing line seems to have faded away.

Ilsa Voss left just three foals to race, all winners, all colts and all trotters.  The direct line to Time Up the Hill stands out as the breeding success among her fillies.

Michael Ward has held Time Up The Hill in very high regard since the start of her career. It hasn’t taken the filly long to justify that opinion.