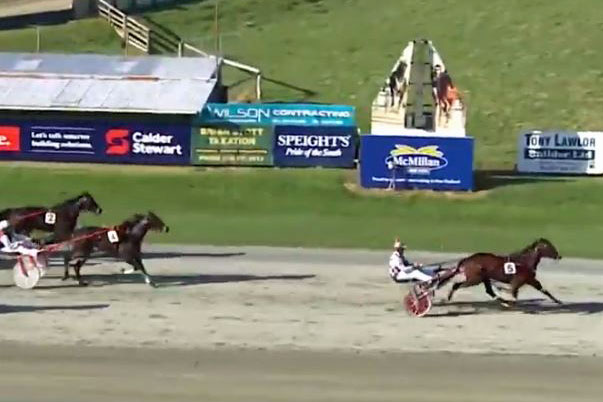 Trainer-driver Peter Hunter flourished his whip as he passed the winning post to notch a special win with Wattlebank Lass at Ascot Park on Thursday.

Hunter’s rare salute was in honour of the recent passing of stable supporter and prominent breeder and owner Barbara Fahy, last Saturday.

Fahy and husband, Brendan, have been prominent and popular breeders and owners, who have raced a long list of prolific winners from stables across Southland.

Hunter, Kirk Larsen and Ellie Barron each wore black armbands in honour of Fahy, whose funeral was on Wednesday.

Hunter said it was a special moment to be able to salute while wearing the back armband in Fahy’s memory.

“The Fahys have been great supporters of ours, the Barrons and the Milnes,” Hunter said, “It was great to be able to win with the armband on for Barbara, she and Brendon were my very first owners more than 20 years ago.”

“And I got my first winner with them with Only The One at a Tuapeka meeting at Forbury.”

Fahy is survived by her husband and three sons Brett, Nigel and Shaun Fahy and daughter Rachael Sinclair.

Though the Fahys are not associated with Wattlebank Lass, Brett said his family got a big thrill out of watching Hunter win while honouring his late mother.

“It was great – I don’t think I have ever cheered so much for a horse that wasn’t ours.”

Wattlebank Lass is raced by his Roxburgh breeders, Bill Bain and grandson Ryan Bain and they race her in partnership with Hunter and his wife, Jo.

The Bain and Hunter combination went within inches of a second win on the Ascot Park card when Bunter’s Dream was beaten out by two nose margins in an exciting finish to race 7.

Bunter’s Dream had to settle for third place after the judge announced I’m Watching You, trained by Hunter’s brother, Hamish, as the winner.