Skip to content
Impressive international credentials added to at Cambridge 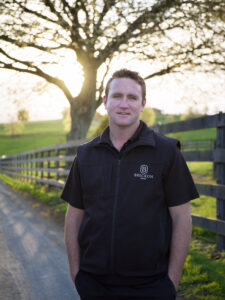 Breckon Farms Manager, Nigel Fahy, has an impressive harness racing CV. He’s bred so many champions for others in both hemispheres but has seldom had time to breed a winner of his own. That was until last Thursday night…

Nigel Fahy has had the best possible grounding in harness racing. He’s been around standardbreds all of his life and has seen many champions bred both in New Zealand and in the northern hemisphere.

She is trained by Glen Harwood at Clevedon and was driven by Tony Herlihy (MNZM). The $2.10 favourite is owned by Mrs E C Oliver-Harwood and R G Harwood.

“It was quite a thrill breeding a winner on your own. I’ve seen lots of champions being born, but there’s nothing like breeding your own. I’ve bred a few with dad (Brendan), the late Alec McDonald gave me Braeside Ceejay (Albert Albert – Braeside Dream) to breed from. We bred a couple out of her, but it didn’t eventuate to much.

“I got Escape The Pace’s dam, Close Escape, through my mate, Gareth Dixon, who trained the previous foal, Mr Henry (Mach Three), for Bill Callaghan. They sold him to West Australia where he has won five races.

“When I got her in 2017, I put her to A Rocknroll Dance. That was when I was working at Alabar, and it seemed a good cross over a Christian Cullen mare.

“Bill was getting near retirement age and I thought I’d give breeding a go on my own for once. I liked the family. Close Escape, who is by Christian Cullen and is out of the unraced 1997 Jaguar Spur mare, Delightful Paula.

“That made Close Escape a full sister to Tosti Girl. She won seven races ($196,761) including the Great Northern Oaks in 2005. Tosti Girl herself has left some quality foals, including the millionaire pacer, Thefixer (Bettor’s Delight), and The Honey Queen (by Rock N Roll Heaven), who has won more than $100,000.

“Then there was another full sister named Delightful Christian, who won nine races ($219,920), including the New Zealand Yearling Sales Championship (2013),” Fahy said.

The Invercargill-born and Verdon College-educated horseman, said he sold Escape The Pace for $5,000 at a weanling sale in 2019.

“Bill had bred three foals from Close Escape, the first She’s Heavenly didn’t race but her first foal has been a good performer in New South Wales named Sweet Heaven. She has won eight races and $60,000.

“Then I had her served by Vincent and the resulting foal was a 2019 colt I named Mandown. I was actually at friend’s wedding when Mandown was born, hence the name.

“I thought that if I could get a few of the boys in on the horse, we would have an excuse to get together more often. Because we live in all parts of New Zealand and Australia it’s hard to organise time to get together to suit everyone,” Fahy said.

“So hopefully Mandown will give us a reason to get together,” he said.

Fahy thought he was a nice little 2-year-old.

“He had a workout for Brian and Gareth Hughes in late December. He’s got a lot of Vincent in him. He has been tipped out for a couple of months with the hope of racing him in the autumn,” Fahy said.

Fahy then put Close Escape to Vincent again and on November 20, 2020, Collateral Beauty was born.

“She’s a bit smaller and not quite the same build as the colt. She is being broken in by Brent Donnelly and is slowly coming to it.”

This year Close Escape was put to Alabar’s prized stallion, Always B Miki.

Fahy was appointed Farm Manager at Breckon Farms in late 2019.

“I’m really enjoying it. Ken and Karen are great to work for. The farm is amazing and so is the stock,” Fahy said.

Fahy was raised on a sheep and beef farm. His father, Brendan always bred a handful of mares each season, with most of the progeny having the ‘Raka’ prefix to their names.

“I used to help Dad after school, with the feeding and weaning of the young horses and lending a hand with whatever else had to be done around the farm. I’ve had a keen interest in horses since.”

However, Fahy did not become immersed in the standardbred industry until he moved to Canada in 2008, where he worked for the famed Seelster Farms in Ontario.

“I was foaling attendant and learnt about all the intricacies of handling stallions. One of my biggest thrills in North America was handling resident stallion, and one of the greatest sires of all time, Camluck,” he said.

After two years in Canada Fahy returned to New Zealand where he was appointed stallion manager at Alabar Farms in Waiau Pa, Auckland.

“I remained there for 10 breeding seasons, and worked with our then marque stallion from North America, Mach Three. He was such a lovely horse to work with,” Fahy said.

“They also had a very strong broodmare band, with the likes of millionaires Pure Country, See You At Peelers and Ginger And Fred. It was great to gain an insight into how a professional breeding farm is run up there,” Fahy said.

The now Ohaupo horseman then came to Breckon Farms just over two years ago.

“While it was sad to say goodbye to Alabar, it has been an exciting opportunity to come and join the crew as the manager of Breckon Farms, and to be able to work with some of the best bloodlines New Zealand has to offer. Fingers crossed Close Escape can continue to improve her record as a broodmare,” Fahy said.