It comes as no surprise that retired Waikato dairy farmer, Jack Davies, continues to breed winners year after year.

The 82-year-old has been studying and judging pedigrees throughout New Zealand for more than 60 years. In fact Mr Davies is one of New Zealand’s most respected breeders of Jersey cows.

“A lot of horse people have told me that they have learnt a lot from pedigree farmers like me. We seem to know the right crosses with the right females. Over a long time you just get a feel for it. 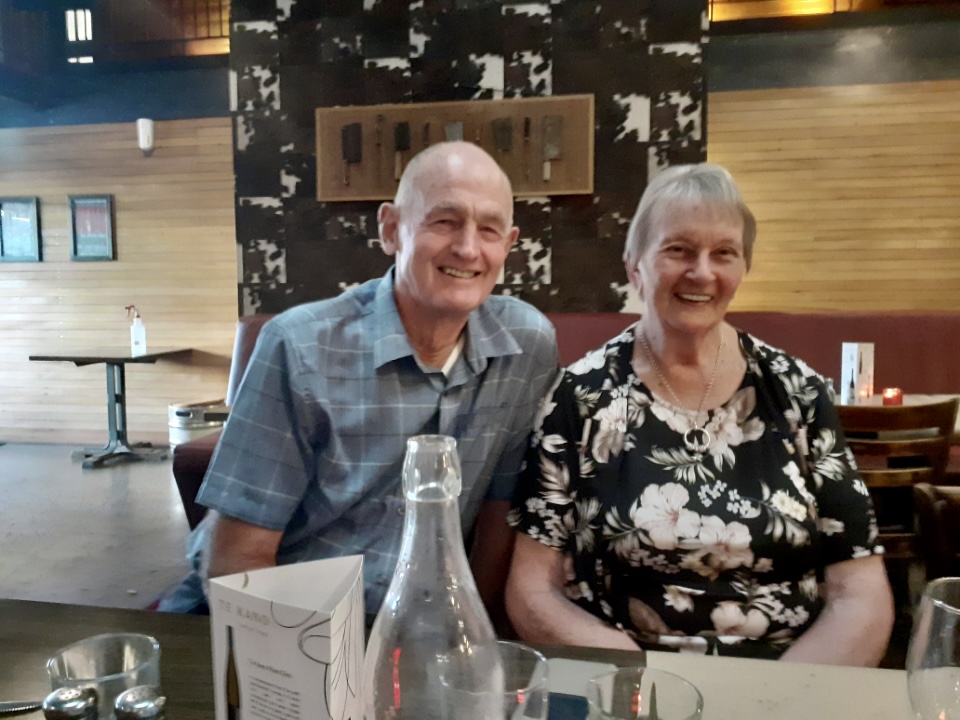 Jack Davies with Jo on her birthday last year

That neck-victory came three years and eight months after Mr Davies and his wife of 61 years Jo, bred their first winner.

That was at Alexandra Park via the now retired 7-year-old Pegasus Spur eight-win ($118,728) mare, Miss Blissful. She was the first foal out of an unraced 2010 Majestic Son mare named Paramount Bliss.

“I’ve really enjoyed breeding standardbreds. I adopt exactly the same principles I did when I was breeding Jerseys. Jo and I have had a lot of fun and success since Eddie steered us into the sport,” Mr Davies said.

Eddie is Mr Davies’ younger brother, who suggested to the couple that he should get a hobby, or interest, away from the family farm.
“It was about the time my son took over the farm and we were looking to look towards retirement. It all started with an eight per cent share in John Dickie’s Real Deal Yankee, and our passion blossomed from there.

“Eddie had a share as well. I’ll always be grateful to him for suggesting harness racing. Sadly he’s no longer with us, but it was great advice. It led Jo and I in a new direction,” Mr Davies said.

The Davies’ became so enthused in harness racing they then gave John Dickie $100,000 to spend on a Bettor’s Delight yearling filly out of a Christian Cullen mare.

“I told him we wanted a lot of change from that $100k, but we did want to breed from a well-bred mare. Jo and I wanted to start off with solid female bloodlines.
“What John found for us was absolutely amazing. She was perfect in every way. Jo and I instantly fell in love with her,” Mr Davies said.

“Jo didn’t want me to sell her, but we did just recently” he added.

A youthful Jack Davies with multiple New Zealand champion Corrondale Apex – Petrina, who was nigh on unbeatable from 1976-1979.

“That was her first win in six starts after also placing twice. She’s a big rangy filly, and I’ve already had offers for her from Australia. Mike said she’s a very nice filly who will get better and stronger with racing.

“She has a beautiful nature, exactly like her gorgeous mother. All of her progeny are the same. After five foals we decided to sell ‘Millie’ to Alabar. We didn’t want to but we already have more than 12 horses on our son’s farm and we have to make ends meet.

“Millie left three fillies, so the breed will definitely live on. It was just a shame her career was cut short by a leg injury. I contemplated stem cell surgery because she was that good, but in the end we opted to breed from her.

“We are glad we did because she us left us some wonderful foals,” Mr Davies said.

He said her first foal, the 2017 Somebeachsomewhere gelding, Murphy’s Reward, was probably one of the best she’s bred so far.

“He won a race here but didn’t like the Auckland way round so we sent him to James Rattray in Australia. He won another two races there for James,” Mr Davies said.

“We previously sent Feel The Burn (10 wins and $77,896) to James. Since coming home we have now mated her to Bettor’s Delight in November,”  he added.

“Mike (Berger) told me she’s as good as anything he’s sat behind at that age, so we are delighted with those comments. But that’s racing – you never know,” Mr Davies said.

“We’ve also got a Captain Treacherous weanling colt out of her as well named Captain Sampson. He’s an absolutely wonderful looking specimen. Everyone is wanting us to take him to the Yearling Sales.

“I don’t think we will though, because Jo wants to keep him as well. There’s just some crosses you would never mix, and so far what we’ve done with Jerseys has worked with standardbreds as well,” Mr Davies said.

The Davies, who have bred six winners to date, are currently breeding from three mares on their son’s nearby Gordonton property.

“All up our six wins so far have come via Miss Blissful, Murphys Reward, MM Sunshine, Quik Barbie, Dream of You and Millies Sensation

“There have been only two bred that have not won a race,” Mrs Davies said.

They said the best horse they raced was the Paramount Gee Gee (2007 Pegasus Spur-Paramount Star), who won 17 races and $561,342 – including: two Breeders Crowns  (2yo and 3yo); 2yo, 3yo and 4yo New Zealand Trotter of the Year; as well as the 3yo Harness Jewels crown.

For the record: The photo enclosed is of Petina – the Jack Davies-bred Jersey cow that won 47 championships and reserve championships.

She also nailed 97 best udder classes including four breed and all breeds classes in consecutive years at Waikato shows.

Jack Davies with Jo on her birthday last year.