The only shame about Joes Rock’s emergence as a serious pacing filly is that there are not more of her. 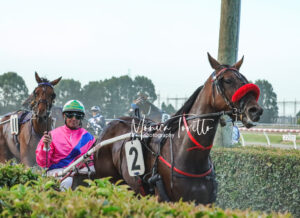 r a classy field of fillies on Friday.

She also put her sire Racing Hill on New Zealand’s winning list in the process.

It’s a good thing he did for Canterbury breeders Bruce and Prue Harper and David Moore as he’s left them a smart filly in Joes Rock.

The three-year-old showed talent when prepared by Moore which led to her purchase by Southlanders Robert and Sharyn Symon who sent her South to join Brett Gray’s barn.

Moore had seen talent in the three-year-old from the moment he started handling her.

“Right from the word go she was a nice wee horse.”

“The day she qualified Sam Ottley drove her and she liked her.”
“Then we lined up and ran third to one of Mark Jones’ and Beach Ball as a two-year-old.”

With plenty of horses to go on with, Moore and the Harpers decided to accept an offer from the Symons.

But unlike most sold horses who are put straight on a plane to Australia, they get to see her strutting her stuff just a little further south.

“Bruce and I have a few still to come through so we moved her on,” Moore said.

The breeders also get the benefit of Joes Rock making a big mark on the record of her dam, Nettys Kingdom.

Joes Rock is the third winner for the Caprock mare, who has had six qualifiers among her six foals to have hit the track.

“All of the ones out of her have done a good job,” Moore said.

“He was as good but he broke down after he only had four starts.”

“Carter Michael (Bettor’s Delight) did a great job, he ended up winning 20 races in Australia.”

“We qualified an A Rocknroll Dance filly but she had a bit of a funny leg so we have decided just to breed from her.”
The only real disappointment with Nettys Kingdom, who won three races, has been that she hasn’t left more foals.

“She has been a funny mare because every time she has had a foal on her she wouldn’t take when we tried to get her back in foal.”

“So, she has only been in foal every second or third year which has been a bit of a bugger.”

“We tried to put her in foal to Ultimate Sniper this season but she never took so she might be finished now.”

Moore and the Harpers have a Sunshine Beach colt to go on with which is looking like their mare’s last foal.

“I’ve broken him in and he is very similar looking to Jay Bees Grin.”

“He is quite a nice horse, he will come in before the winter.”

Racing Hill still stands in North America, but hasn’t been sighted again Down Under since his sole season in 2017-18.