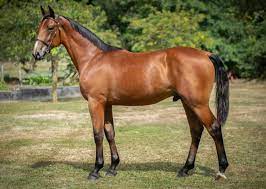 Tony Mac as a yearling

The Brad Williamson trained trotter backed up that effort with a good but slightly green third at Winton this week among a quality line up of lower grade trotters.

Tony Mac is a half-brother to Williamson’s outstanding trotter Cracker Hill (Muscle Hill) who is on the comeback trail after being handled patiently following a minor knee complaint.

“He looks like he will be a handy horse once he learns a bit more about racing,” Smith said.

Smith is on the countdown to selling a Father Patrick filly from Juneamy Castleton at the National Yearling Sales in Christchurch.

“She is quite similar to the other foals out of the mare.”

“Hopefully the people interested in her will be happy with her.”

He was sold privately to Emilio and Mary Rosati.

Smith now has a Volstead colt to look forward to next.

“She has got a colt foal by Volstead who is a lovely type and she has a positive to Bold Eagle.”

“Delistic had a colt by Volstead, and she has a positive to Marcoola.”

Smith is also the breeder of B D Joe (Roll With Joe-Tact Aunty-Christian Cullen) who has recently produced a third in the Group Three Summer Cup and fifth in the Group Two Franklin Cup.

“Tact Aunty has a filly foal at foot by Sky Major and a positive to Captain Crunch.”

Smitten (Sundon-Kahola-Chiola Hanover), who is from the family of Lyell Creek, also produced a colt foal by Andover Hall this season for Smith.